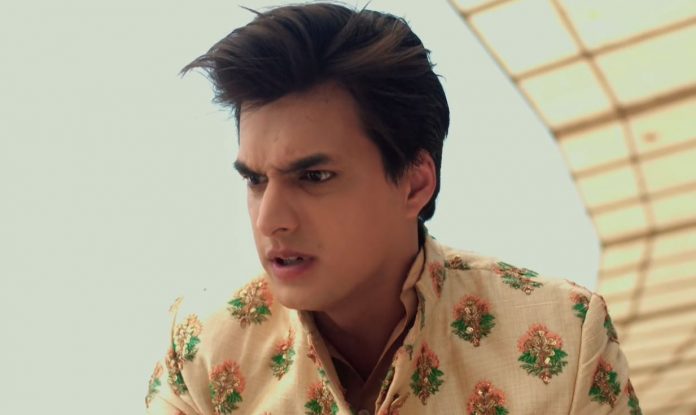 Yeh Rishta Kartik trembling shock 3rd May 2021 Full Update A huge twist comes in the episode when Sirat comes face to face with Ranvir. Sirat decides to not look back at her past, since she has move on with Kartik. Dadi witnesses the engagement function, being at the ashram, away from the family. Ranvir gets believing Rhea, that Sirat is waiting for him to rescue her from a forced marriage. He doesn’t want Nani to ruin Sirat’s life.

He really thinks that Sirat is unhappy and runs to her rescue. He wants to stop the engagement at any cost. The moment he enters the hall, he gets to see Kartik. He finds Sirat really happy with Kartik and his children. He realizes that Rhea had been lying, Sirat has chosen Kartik by her own will. He truly loves Sirat, but he can’t face her. He feels losing his love forever. He undergoes many mixed emotions at the same time. Kartik and Sirat get wishes from the family.

Ranvir feels Sirat can never come back to him after getting into a relationship with Kartik. He gets heartbroken. He doesn’t want to hurt Sirat by appearing in front of her. Ranvir feels ache in his chest wound. He gets away from Sirat’s sight. Kairav happens to see him and informs Kartik. Kartik wonders why did Ranvir come back, if he had some work. He goes to talk to Ranvir. Ranvir wishes Sirat stays happy with Kartik. Sirat doubts that Kartik’s friend is Ranvir. Sirat wants to see if its really Ranvir. She can’t stop her feelings.

She grows restless to see him once. Kartik finds Ranvir’s behavior puzzling, when he sights him running out of the premises. Rhea hopes for a miracle. She plans to break Kartik and Sirat’s relationship. Ranvir doesn’t stop to speak to Kartik. He is lost in his own painful world. He can’t get over his memories with Sirat.

Sirat happens to learn about Ranvir from Kartik. She questions Kartik about Ranvir. Kartik reveals that he met Ranvir on the Gangaur day, Ranvir had the ring and came to return it, but he was in a hurry to avoid happiness. Sirat feels more tensed after getting it confirmed that it was Ranvir. Ranvir sadly tries to hold up himself in order to leave from the hotel. He meets with an accident in front of Sirat’s eyes. She is left shattered by the shocking sight of losing her true love.

Ranvir’s love knocks her heart once again. She loses out her anger and melts her heart for him, seeing him in need of help. Kartik learns about Ranvir’s accident. He finds Sirat panicking. He realizes her connection with Ranvir. He comes to the conclusion that Ranvir is Sirat’s ex, who couldn’t keep the promise of marriage. Sirat rushes Ranvir to the hospital, and stays disturbed. Kartik understands her and doesn’t question her anything.

On the other hand, Rhea creates a scene in front of the Goenkas. She mentions about Ranvir, who had come to meet Sirat. Manish grows angry knowing Sirat is running back into the past by neglecting Kartik’s emotions. He gets practically fuming at the family. He is scared that Sirat will not come back to them once she gets her love. Rhea instigates him further. Kartik and Sirat learn about Ranvir’s critical state. Kartik realizes that Ranvir wasn’t wrong on the marriage day when he left Sirat waiting in the mandap. He learns the sad incident that stopped Ranvir from reaching her. He feels sorry for a true lover like him.

He decides to unite Sirat and Ranvir. He doesn’t want Sirat to hurt herself. Kartik initiates a meet between Sirat and Ranvir to help them sort out the issues, without thinking of the consequences. He doesn’t realize that Kairav will not be able to live without Sirat, if she returns to Ranvir. Kartik acts selfless to unite the lovers. Will Kartik succeed? Is Sirat destined to be with Ranvir? What lies in Kartik’s fate? Comment your views and keep reading.

Reviewed Rating for Yeh Rishta Kartik trembling shock 3rd May 2021 Full Update5/5 This rating is solely based on the opinion of the writer. You may post your own take on the show in the comment section below.