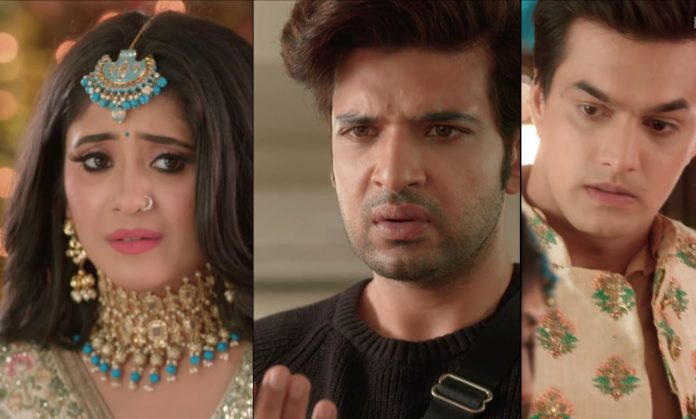 Yeh Rishta 10th May 2021 Written Update Sirat to exit Ranvir wants to know from Sirat if she thought about leaving Kartik and breaking their engagement to get back to her former lover. He tells her that anyone would fall for a humble kind man like Kartik, knowing he is super rich and successful. He adds that her future will be too secured if she chooses Kartik. He asks her about her decision. Sirat is tensed to just think about it. She can’t decide it so soon. Her dilemma grows further when Kartik comes to their rescue.

He tells them that Ranvir’s dad has sent his goons to kill Ranvir and Sirat. He better wants to protect them from the upcoming danger. He once again proves that he is concerned for both of them like a selfless soul. Sirat feels indebted to Kartik who went against her wish and united her with her love Ranvir. Chandan informs Ranvir about his dad’s misdeed. Ranvir isn’t scared of his dad anymore. He feels he has got his love Sirat and can fight anyone.

He asks Sirat to accompany him so that they meet his dad and give a final answer. He asks Kartik to let him just go. Kartik stops him from making such a mistake. He tells Ranvir that his dad will get them killed if they meet him at this time. He requests Ranvir to think of Sirat’s security. He convinces Ranvir and Sirat to come with him to the hotel to stay there for few days until the matter resolves. Ranvir doesn’t want to face Kartik’s family.

He feels it will get awkward for everyone. Kartik tells him that his family is understanding and supportive. They reach the hotel where Ranvir sees the strong emotional attachment between Sirat and Kairav. He feels miserable with the thought of separating them. He stays clear minded that he will not leave Sirat at any cost for anyone. He tells Kartik that he will take Sirat with him. Ranvir meets Goenkas. He finds Kartik and Manish’s bond sweet and strong.

He wishes he shared a lovely bond with them with his dad. Kairav asks Sirat to make a wish that she will always stay together. She wishes that everyone faces their better fate. She doesn’t want injustice to happen with anyone. Kartik doesn’t wish Sirat to stay back for Kairav. He wants her to go with Ranvir. On the other hand, Sirat learns a shocking truth from her Nani, that Ranvir didn’t cheat her, he had really come to meet her.

She feels terrible knowing Nani didn’t tell her the truth and filled hatred in her heart for Ranvir for two years. She repents to misunderstand Ranvir. She wants to do justice with her love, who suffered because of her. Sirat seeks Kartik’s help in making a decision. Kartik guides her in choosing Ranvir, who deserves her the most. Will Sirat choose Ranvir? Comment your views. Keep reading.

Reviewed Rating for Yeh Rishta 10th May 2021 Written Update Sirat to exit5/5 This rating is solely based on the opinion of the writer. You may post your own take on the show in the comment section below.