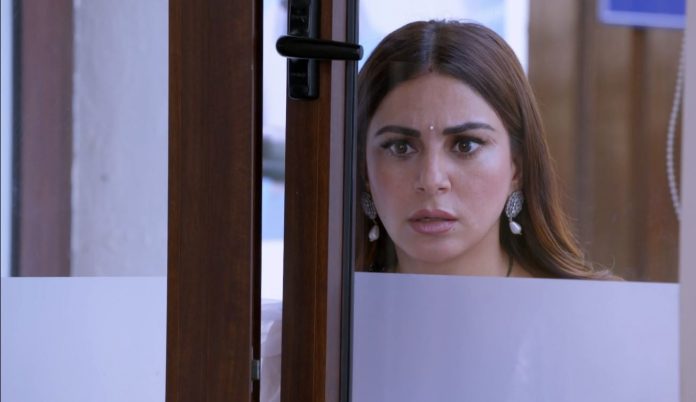 Kundali Bhagya Big twist reveal 14th May 2021 Full Update Karan jokes on Preeta’s old picture. He tells that she is looking pretty after she married him. She asks him to have food, she will visit him again. He tells her that he will miss her. Shrishti tells Sameer that Megha is involved in Akshay’s murder. Sameer tells that Megha isn’t involved, she is the murderer, as Ruchika already told the truth. She tells him that Ruchika could have lied to them. She senses some trouble. They want to meet Karan.

Preeta meets them and finds them in the middle of a big argument. They don’t want Preeta to misunderstand. Preeta pulls their ears. They tell that they had come to meet Karan. Preeta likes their pairing. She feels Shrishti and Sameer are in love. She wants to talk about their marriage. Preeta tells that they can meet Karan after some time during the next visiting hours. She tells that she will go to the hospital and collect Mahesh’s reports.

Mahesh misses Karan. He shares his memories with Rakhi. Rakhi also misses her son. She tells that Rishabh always protected Karan, if Rishabh was here, then he would have not let Karan suffer. Mahesh tells that Karan has become a good husband. Rakhi is proud that Karan has become sensible. Pammi still thinks that Preeta isn’t auspicious for the family. Rakhi excuses herself to avoid Pammi’s nonsense.

Pammi wants Rakhi to understand that Preeta got bad luck for the family. She feels Preeta is free and enjoying her life, while Karan is sobbing in the jail. She decides to expose Preeta’s truth. Meanwhile, Ruchika reprimands Megha for marrying Akshay by cheat. Megha tells that she knows the secret that Ruchika’s child doesn’t belong to Akshay. They get into a fight. Megha tells that Akshay’s parents will hate her. Ruchika isn’t scared of Megha’s threatening. Ruchika asks Megha not to act innocent.

Megha had stolen Ruchika’s bracelet and left it at the godown to frame her in blackmailing. Ruchika threatens Megha. Ruchika takes revenge on Megha by lying that Megha is the killer. She admits that she had acted innocent to fool Karan. Megha warns her. She tells that she will file a police complaint against her. Ruchika humiliates her further. Preeta collects Mahesh’s reports. Megha visits the same hospital. Preeta spots her. She learns that Megha is pregnant. Megha tells the doctor that her husband is dead. Preeta thinks Megha would have not killed Akshay. She tries to speak to Megha. Prithvi calls up Megha to refuse to her blackmailing.

Megha gets rigid to take the money from Prithvi by blackmailing him. She calls him to ask for money again. Pammi gets hell bent to turn Rakhi against Preeta. She can’t stand Preeta’s praise by the family members. She wants Rakhi to realize Preeta’s pretence. She doesn’t succeed in her motive, and gets scolded by Rakhi for being so negative towards Preeta. Prithvi visits Karan in the jail to tell him that he is loving the sight of Karan being behind the bars. He tells that he would wish that Karan never gets freed.

He adds that he is very happy that Karan is in the jail and Preeta is alone at home. He wants Karan to stay away from Preeta. Karan expected the same from Prithvi. Meanwhile, Kritika and Sarla also visit Karan, at the same time when Prithvi is hurting Karan by his bitter taunts. Sarla is thankful to Karan for his huge sacrifice. She praises him that he has been so selfless. She feels lucky to get him as her son-in-law. Prithvi gets upset hearing this. Karan tells Sarla that they all love each other so much that they can give their lives as well. How will Preeta reach the truth? Keep reading.

Reviewed Rating for Kundali Bhagya Big twist reveal 14th May 2021 Full Update3/5 This rating is solely based on the opinion of the writer. You may post your own take on the show in the comment section below.