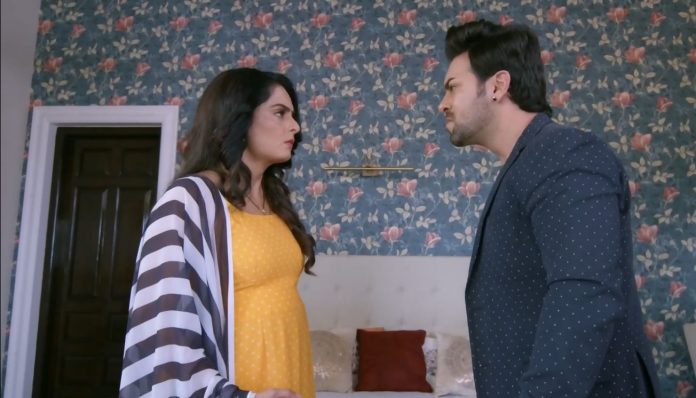 Kundali Bhagya 24th May 2021 Written Update Revelation time Prithvi doesn’t want his secret to come out. He wants Preeta to not know his truth by checking the contact numbers. Kritika and Preeta realize that a call got connected from Akshay’s phone to his first target, that’s Kritika herself. Preeta tells that they shall find more of his targets, whom he was blackmailing for money. They don’t realize that Prithvi is the second target. They call the third victim of Akshay, and realize that its someone from the family. Prithvi goes to find out the person whose phone is ringing.

Preeta tells that they have to find the person whom Akshay had last dialled before his death. Sherlyn and Mahira get worried for themselves. Prithvi thinks his phone is ringing, he will be caught by Preeta. He excuses himself to rush and save his phone. Sherlyn also rushes away to save herself. Mahira tells Rakhi that Preeta got Akshay’s mobile phone. Rakhi thinks they shall inform Mahesh about the evidence. Someone disconnects the ringing phone.

Kritika tells that maybe its someone who wasn’t in the living room. Preeta tells that the phone will ringing again, the person would have not disconnected it. Sherlyn stops Prithvi to know about Akshay’s phone. Prithvi tells her that Preeta got Akshay’s phone, Preeta is finding Akshay’s targets, they will soon reach him. He wants to switch off his phone. Sherlyn tells that she didn’t hear any ringtone. Prithvi runs to save his name.

Sherlyn follows him. Mahira wants to know what’s happening. Sherlyn hurriedly tells Mahira that Prithvi may get caught. Mahira tells that if Prithvi gets caught, then she will leave him and cut all connections with him. She advises Sherlyn to do the same, but Sherlyn doesn’t agree. Sherlyn wants to stay loyal to him. Mahira doesn’t want to sound selfish. She tells that she can’t leave the house for their sake. Shrishti suspects Mahira and thinks its her phone. She doesn’t get any phone in Mahira’s phone.

Preeta and Kritika check Pammi’s room as well. Prithvi gets time to rush to his room and get his phone. Pammi asks Preeta what was she doing in her room. Prithvi checks his phone and realizes that his phone didn’t ring even once. He wants to know whose phone was ringing if it wasn’t his phone. He also wants to join the chase of the mysterious Luthra. He knows that person will be the killer. He thinks its a chance to impress Preeta and do a big favor on her.

Pammi confronts Preeta and Kritika for lying and checking her room. Preeta lies that she was searching for lost earring. Pammi makes Sherlyn apologize. She wants to know what’s going on that everybody is secretly finding something. Rakhi calls Mahesh to tell him about the new find. Mahesh calls her at the same time, and fails to get through.

Prithvi find Sherlyn with the phone. He is much shocked to know that Akshay was blackmailing Sherlyn, and she is the killer who committed the crime to get rid of him. He suspects that she killed Akshay. He confronts Sherlyn. He tells her that she is stuck in a big mess. Soon, Preeta and team reach Prithvi and Sherlyn while finding the phone. Kritika questions Prithvi about his presence in Sherlyn’s room. He comes up with a story to fool Kritika. Is Sherlyn the real killer? Keep reading.

Rakhi sings Preeta’s praise again. She tells Pammi that Preeta is a blessing for her, she has always protected the family. She adds that she has found Akshay’s phone to prove Karan innocent, she has succeeded in finding the evidence when Karan took the blame and went to jail for her sake. She tells that nobody thought of finding Akshay’s phone and get the evidence to save Preeta from the case, but Preeta has smartly made a plan to save Karan.

She feels that she should have done the same for Preeta, but failed. She asks Pammi not to misunderstand Preeta, who is a boon for Luthras. She tells that Preeta can never be wrong, she is working hard to save Karan. Pammi apologizes for misunderstanding Preeta. She is sure that Sherlyn is a wrong person. Preeta tells that the ringtone sound is coming from Sherlyn’s room.

Preeta and team head to Sherlyn’s room. Prithvi reprimands Sherlyn for hiding a big truth from him. He tells that she has landed in a big problem. Preeta finds them together. Kritika asks Prithvi what is he doing in Sherlyn’s room. He lies that he failed to explain Sherlyn to look after herself in the state of pregnancy. Sherlyn asks Preeta why did she come. Preeta calls on the number again. Sherlyn and Prithvi get stressed. Preeta’s phone gets off at the same time. Sameer tells that he will make a call from his number.

Preeta confronts Sherlyn about her phone. Prithvi saves Sherlyn by changing the ringtone. Sherlyn gets saved from Preeta’s suspicion. Preeta asks Sameer to call Mahira and check if the ringtone matches. Sameer calls Mahira and finds it a different ringtone. Prithvi tells Sherlyn that she is caught red-handed. She doesn’t admit anything. Prithvi confronts her for hiding the truth so long.

He asks her why did she cheat him. He provokes her to confess the crime. He asks her the reason for the lie. He tells that he could have saved her if she confessed to him before. He calls her a big fool. He asks Sherlyn if she had killed Akshay. Sherlyn makes a shocking confession that she had killed Akshay. Prithvi can’t believe it that she could do this crime in her pregnant state. It gets revealed that Akshay was blackmailing Sherlyn about her affair with Prithvi, and she had to kill him to save her secret. Keep reading for further updates.

Reviewed Rating for Kundali Bhagya 24th May 2021 Written Update Revelation5/5 This rating is solely based on the opinion of the writer. You may post your own take on the show in the comment section below.