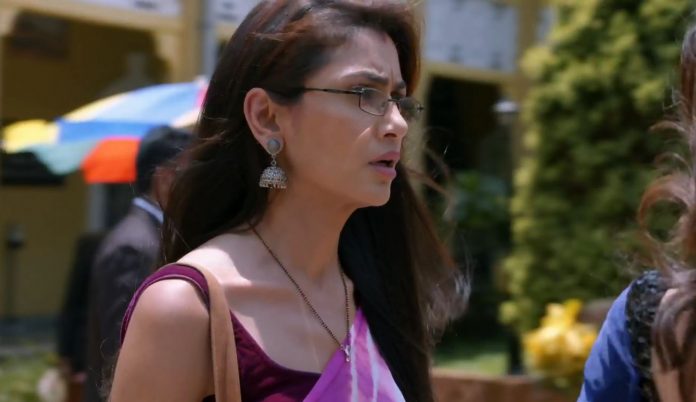 Kumkum Bhagya 24th May 2021 Written Update New drama Tanu invites Pragya in the engagement function. She wants Pragya to witness how Abhi is going away from her. Pragya knows its just a plan and stays relaxed. She pretends to worry in front of Tanu. She recalls Tanu’s conversation with Pradeep. She thinks Tanu was talking with much love, like she has a relation with Pradeep. She wants to find out if Tanu has someone in her life and is cheating Abhi once again. Tanu asks Pradeep not to call her, and just wait for her call.

She tells him that whatever she is doing is for their good future. She expects him to show support and understanding, but he loses out his temper. Tanu worries that he may cause problems for her. Later, Pragya informs Sarita that she heard Tanu’s conversation over the phone with someone known. She is confused about their relation. She tells Sarita that Tanu is hiding something crucial, and even Aaliya won’t be knowing about it.

Sarita asks her to find out who is Pradeep and what is his agenda in Abhi’s matter. She encourages Pragya to don the detective cap once again. She knows that Pragya is good in taking disguise and hide her identity when she comes to her investigation mode. Pragya tells that this time she has Abhi and their daughters Rhea and Prachi along with her. Will Pragya play a new drama and find out Pradeep’s secret? Keep reading.

Prachi finds Rhea having Pragya’s unique qualities even when Rhea had been away from Pragya till now. Rhea gets happy with the compliment. She tells that she is unique like Pragya being her daughter. Ranbir meets Prachi. They get into a moment. He tells her that he didn’t stop her, he will hold her hand with all the right when he wants. He tells that she can never snatch his rights. Prachi gets speechless.

Ranbir tells her that he will tell her a story. He tells about Dida’s emotional blackmail. He makes her realize that she loves him. He wants her to not make it too late. He tells her that she should understand and take the hint. He wants her to admit what she feels for him. She behaves estranged again. He feels hurt by her behavior. Prachi goes to meet Shahana. Shahana tells that she wants to reveal about her life situation. She wants Prachi to be with her. Shahana asks Prachi about Ranbir and her.

Prachi tells that there is nothing between them, Ranbir and Rhea will get married once things get sorted in Abhi’s life. She tells that Abhi will be freed from the case soon, then he will get keep Rhea’s marriage. She feels broken within and misses Ranbir a lot. She shares her sorrow with Shahana. She sheds tears for Ranbir. Meanwhile, Tanu is happy to see her engagement card. She feels her love has the craze, she can do anything to get Abhi, so she has won over Pragya’s love.

Tanu meets Pragya and Sarita to give her engagement card. She tells Pragya that she is ready to wait for Pragya’s divorce, she can find a lawyer as well for Pragya’s assistance. She asks Pragya to attend the engagement to see Abhi and her together. Sarita manages to fool Tanu and get her phone. Sarita apologizes to Tanu for spilling the curry on her saree. She asks Tanu to clean up the stain. She troubles Tanu deliberately. Pragya realizes that Tanu left her phone outside. She goes to check about Pradeep.

Prachi tells Ranbir’s story to Shahana. Shahana tells her that Ranbir wanted to give her hint to profess love. She asks Prachi not to break his heart. Pragya asks Prachi to help her check Tanu’s phone. She tells Prachi that she has to find out Tanu’s secret that could help them in the case. Prachi goes to stop Tanu. Pragya unlocks Tanu’s phone. She gets to see Pradeep’s picture on the incoming call. She answers to find out about him. Pradeep threatens Tanu. He summons her home. He tells her that he isn’t her past, but her present. Pragya realizes that Tanu is hiding her current relationship from Abhi. She can’t trust Tanu. She goes on to reveal the truth to Abhi and Mehra family.

Sarthak is moved to see the news of Abhimanyu’s arrest based on Kalyani’s complaint. He shares the matter with Anupriya. Abhimanyu escapes from the jail and reaches Kalyani’s house. Kalyani gets tensed to find the door locked. She wakes up Malhar to inform that someone has entered their house. Malhar and Kalyani get shocked to find Abhimanyu in their house. Malhar warns him not to take any wrong step. Abhimanyu points the gun at Malhar in rage. He tells that he will kill Malhar for sure. Malhar asks him to keep his cool, but Abhimanyu refuses to listen.

Reviewed Rating for Kumkum Bhagya 24th May 2021 Written Update New drama3/5 This rating is solely based on the opinion of the writer. You may post your own take on the show in the comment section below.