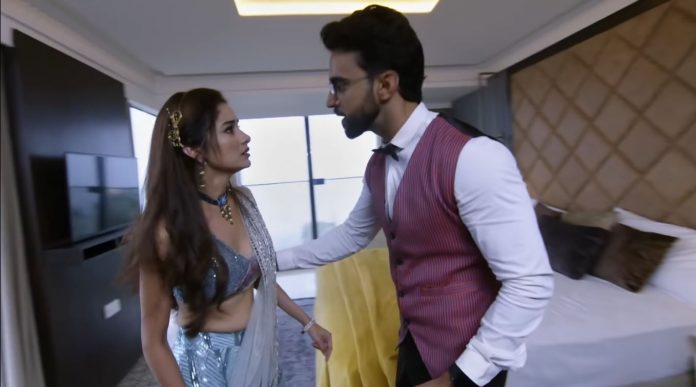 Kumkum Bhagya 27th May 2021 Written Update Confession Abhi shares his fears with Pragya. He doesn’t know if things will turn out the way they expected or not. Pragya encourages him, but has the same fear in her heart. She confesses her fears to Abhi. She tells him that they have to stay strong and together to know Tanu’s truth. Rhea, Ranbir and Aryan come to Prachi’s room. Ranbir is mesmerized on seeing Prachi. Rhea tells Ranbir that she got the pill to spike Tanu’s drink. She explains how he will do the task. Ranbir intends to spike the drink for Abhi’s sake.

Rhea asks him not to make any mistake, they can’t afford any mistake in their plan. She tells that she just has one pill, and there is no back up. Mitali tells Ranbir that once he spikes the drink, he shall signal her to serve the drink toTanu. Prachi asks Mitali not to be nervous, else Tanu will suspect them. She takes Mitali along to serve the spiked drink. Mitali takes the drink for Tanu and serves it with affection, but Tanu refuses to have it. Aaliya pretends to accept Tanu heartily for Abhi’s happiness and freedom.

Mitali tells Prachi that Tanu refused to have the drink. Prachi takes the drink back with her. She tells her team that Tanu didn’t take the drink, their plan has failed. They decide to stick to their previous plan. Rhea tells that they have to focus on their plan and get Tanu’s phone. Ranbir and Aryan go to steal Tanu’s phone. They trick Tanu and manage to swap Tanu’s phone with another one. Pragya rushes with the phone.

She tells Prachi that she will be sending the engagement invite to Pradeep. She gets his contact details from Tanu’s phone. She sends him the invite, which makes him enraged. He didn’t know that Tanu is back stabbing him. He decides to find out the truth by meeting Tanu. Aaliya awaits Pradeep. She tries different ways to stop the engagement for some time until he arrives. She asks Abhi to dance with Tanu before the ceremony. Abhi dances with Tanu unwillingly. He thinks of Pragya and smiles. Pragya pushes Abhi.

Tanu feels unwell. She asks them to get water for her. Rhea cleverly plans to get the spiked drink for her. Pradeep reaches the venue. He meets a waiter and pays him to get a similar disguise. He takes the waiter’s disguise to reach the engagement ceremony. Rhea asks the waiter to take the spiked drink for Tanu. Pradeep reaches Tanu in the disguise. Tanu doesn’t identify him. Pradeep learns that she is really planning to marry Abhi. He decides to kill her if she dares cheats him. He takes Tanu with him to confront her.

Tanu confesses that she is marrying Abhi for the sake of money. She wants him to trust her. She asks him to calm his rage. He tells her that she can’t pay any of his debts even if she marries Abhi. He tells that he doesn’t trust her at all. She tells that this is the only option for her to get rich. He doesn’t permit her to marry Abhi. He threatens her that he will tell her truth to Abhi right away. Tanu stops him. Abhi reaches them. Tanu gets worried that her truth will come out. Abhi already knows her marriage truth. Will Abhi confront Tanu or pretend ignorant to trap her further? Comment your views. Keep reading.

Reviewed Rating for Kumkum Bhagya 27th May 2021 Written Update Confession: 4/5 This rating is solely based on the opinion of the writer. You may post your own take on the show in the comment section below.