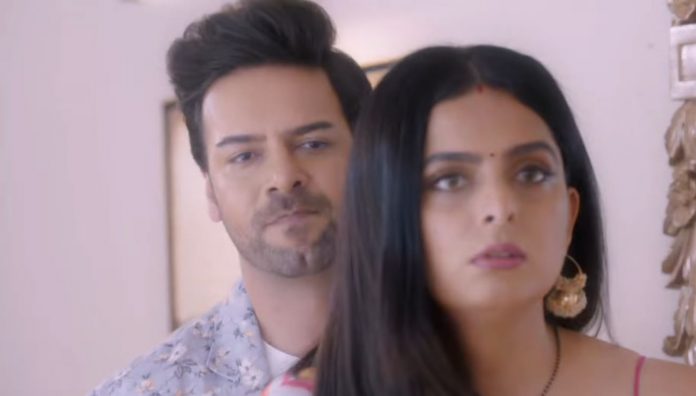 Kundali Bhagya 1st June 2021 Written Update Sherlyn caught Kritika and Sameer tell the hacker that they still have the friend. Preeta hands over the phone. They get the phone charged up to check the video and photos. Prithvi looks for Preeta. He doesn’t like the surprise when Sherlyn comes. She asks him if he was waiting for Preeta. He tells her that he wasn’t thinking of Preeta. He tells that he just loves her, because of their baby. He tells that their baby is the proof of their love. He feels proud that she didn’t fall weak and managed to steal the phone.

He tells Sherlyn that they are the winners, they should celebrate, but not in a hurry. She tells him that they will celebrate that they are totally safe. She wants the credit for their victory. He tells her that she got saved because of his help. Preeta fails to check any evidences. She tells that the phone fell down in the chase. Sameer’s friend takes it for the repair. Preeta tells that they will get the proof in few hours.

She feels Mahira would not be able to save her. She wants to visit Karan and tell him that Mahira is the killer. Preeta meets Karan to share the investigations. Karan tells that Mahira can’t be the killer, there is something missing out. Preeta tells that Mahira stays alert and tricks them. Mahira finds Prithvi and Sherlyn talking about her. Sherlyn is still enraged that Mahira didn’t help her. She tells Prithvi that she had to trap Mahira, she doesn’t spare anyone who does wrong with her.

Prithvi sees Mahira behind and worries that Sherlyn is blurting out the truth. Sherlyn tells that she will never spare Mahira, its her nature to settle scores. Prithvi signs her to see Mahira behind. Sherlyn gets tensed on seeing Mahira, who begins questioning them. Sherlyn cooks up a story to fool Mahira. Sherlyn leaves her phone in the room. Sameer’s phone fixes Akshay’s phone.

Preeta visits Karan in the jail to make him aware of Mahira’s crime. Karan is confident that Mahira isn’t Akshay’s murderer. Preeta is surprised to see him showing faith on Mahira, knowing what the latter has done with them in the past. He tells her that he is pretty sure that Mahira isn’t the killer, even if Preeta got evidences against her. He explains Preeta that Mahira was with him at the hotel when Akshay got murdered. He tells Preeta that Mahira can’t manage to kill Akshay and come back to dine.

He apologizes to Preeta if she felt jealous by his belief on Mahira. He asks her to find out about the real killer by more investigations. Preeta makes a leave. Shrishti and Sameer get irritated on seeing Mahira roam freely. They think Mahira is the killer, who isn’t concerned for Karan being jailed. They decide to interrogate her and make her confess her crimes. Sherlyn overhears their plans. She gets happy that they aren’t doubting her. She proudly informs Prithvi how she has got Mahira into trouble.

Prithvi tells that her plan can backfire anytime. Sherlyn promises to not spare Mahira for going against her. Mahira hears Sherlyn’s big threatening. She goes to warn Sherlyn. She isn’t scared of Sherlyn. She asks Sherlyn to not go against her. Sherlyn and Mahira get into a cat fight. Mahira throws the juice over Sherlyn’s clothes. She vents her anger. Prithvi worries seeing their fight. Pammi comes across Mahira, when the latter is in a bad mood. Mahira argues with her. She openly challenges that she will marry Karan soon. Pammi realizes that Mahira is also after Karan.

Reviewed Rating for Kundali Bhagya 1st June 2021 Written Update Sherlyn truth out: 2/5 This rating is solely based on the opinion of the writer. You may post your own take on the show in the comment section below.