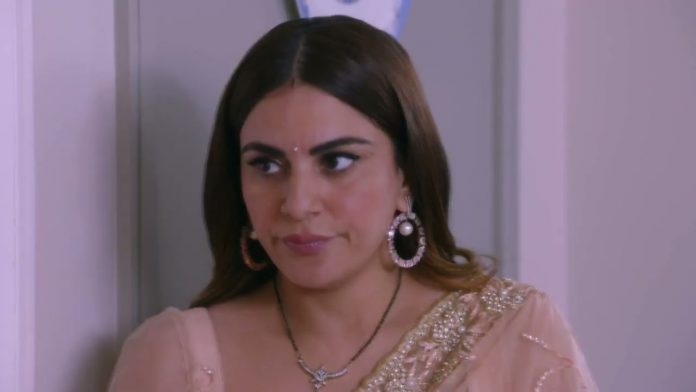 Kundali Bhagya 2nd June 2021 Written Update Mystery call Sameer’s friend fixes Akshay’s phone and informs Preeta. Preeta tells Sameer and Shrishti that Mahira isn’t the killer, since she was with Karan at the time of Akshay’s murder. They decide to call on the third target number. They realize that its Sherlyn’s phone ringing, which brings the possibility of Sherlyn’s involvement in Akshay’s murder. Preeta tells them that they shall make a plan to expose Sherlyn’s truth. Preeta asks Shrishti to keep Mahira outside until they work out their plan. She enters Mahira’s room and gets her footwear. Mahira rebukes Shrishti for stopping her. Mahira goes to room. Shrishti worries that Mahira can see Preeta.

Preeta plans to check the footwear that left the footprints outside Mahira’s room. She keeps back the footwear taken from the room. Sherlyn finds Preeta, Sameer and Shrishti outside her room. Preeta doesn’t make her sense that she is actually suspecting her. Sherlyn thinks Preeta and team are just finding out about Mahira. Sameer tells Preeta that footwear can’t prove anything like a phone call does.

Sameer collides with Mahira. He doesn’t know what to say to stop her from going to her room. He tells her that Shrishti’s dressing sense isn’t good like hers. She doesn’t get what he wants to say. She rebukes him and goes away. Sameer tells Shrishti that he was just praising Mahira to distract her and stop her from seeing Preeta. Sherlyn senses that someone is inside her room. She doesn’t see Preeta keeping the footwear in her room. Preeta succeeds in pulling off her plan. She comes across Mahira when she leaves.

Preeta asks Mahira if Pammi told her anything about Karan. Mahira is upset recalling Pammi’s taunts. She thinks Preeta is the one who filled Pammi’s ears against her. She misunderstands Preeta. Sameer and Shrishti are sure that Sherlyn is involved in the murder. Shrishti gets raged up to confront Sherlyn. Preeta stops Shrishti from making any mistake in anger. Rakhi asks Sherlyn to speak to Rishabh. She tells that Rishabh had called her.

Sherlyn thinks Rishabh is concerned since she is pregnant. She speaks to him on the video call. She asks him if he loves her, truly and deeply as Karan loves Preeta. Rishabh gets uncomfortable with her question. He avoids answering her. He thinks he has done wrong to call her up and giving her hopes. Sameer tells Preeta that they should call up Sherlyn and threaten her to bring out her truth. Sherlyn gets the blackmailer’s call. She is stunned when the girl demands 50 lakhs from her.

Rakhi meets Karan in the jail. She finds him happy and in peace because of his belief on Preeta. She is confident that Preeta will soon prove Karan innocent. Rishabh speaks to Karan on the video call and gets too emotional. He can’t see Karan like that. Karan asks him not to break down, and instead become his strength like always. Will Rishabh come down to help Karan? Keep reading.

Reviewed Rating for Kundali Bhagya 2nd June 2021 Written Update Mystery call: 2/5 This rating is solely based on the opinion of the writer. You may post your own take on the show in the comment section below.