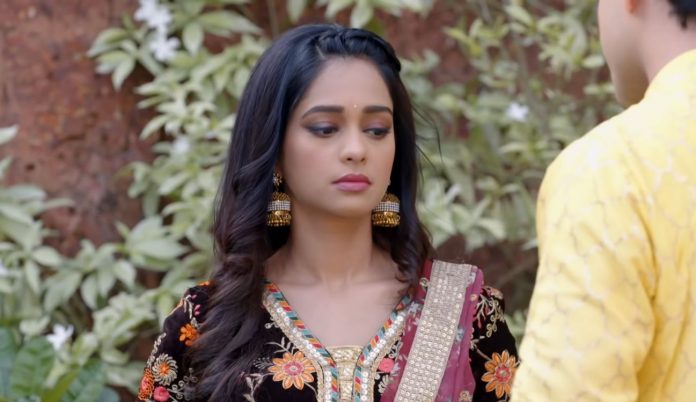 Kumkum Bhagya 4th June 2021 Written Update Prachi accused Rhea loses her bracelet in Prachi’s room unknowingly. She leaves from the room before Prachi comes. Tanu is suspicious seeing Abhi’s change in behavior. She asks Pragya why is Abhi behaving sweet. Pragya tells her that Abhi is genuinely feeling the happiness and behavin such. Aryan tells Shahana that Aaliya doesn’t want them to be friends. Aaliya finds them together again. Shahana gets too upset. Tanu and Pragya make two teams for the Antakshari.

Tanu challenges Pragya to win. She gets Abhi in her team, but Abhi refuses to play. She then asks him to divide the team according to his likes, so that he doesn’t refuse to play. Abhi and Pragya enjoy the Antakshari which gives them a chance to be together again. Tanu brings Baljeet there. Pragya realizes that she had to gift a necklace to Tanu.

Pragya and Mitali ask Rhea to get the jewellery, since the safe is in her room. Rhea agrees to go, but Tanu asks her to get the necklace later. She doesn’t show interest in the jewellery, but makes a plan to get the jewellery robbed by Somdutt. She finds Somdutt entering the house to demand money from her. Pragya too sees him sneaking inside, but doesn’t think much about it. Tanu stops Somdutt’s blackmailing by threatening him with a knife.

Tanu asks him to steal the jewellery kept in the safe, and just consider is as the payment from her side. She tells him that he shouldn’t bother her again. Rhea goes to get the necklace for Tanu. She realizes that someone is inside the house. She realizes that the jewellery is robbed. She gets a huge shock. She checks the bathroom and finds it locked. Somdutt gets trapped inside. Rhea wants to alert the family about the thief. Aaliya asks Aryan to find Somdutt, knowing Pragya has seen him enter the house. Prachi gets disappointed to find her dress torn, and realizes that Rhea has done it when she finds Rhea’s bracelet fallen there. What will happen next? Keep reading.

Ranbir tells Prachi that she decided to stay away from him. He asks her how would he stay away from her, when she looks so good. He asks her to stop looking so pretty that he gets helpless to his heart. He tells that it will be a favor if she doesn’t look good to him. Somdutt gets caught for the theft.

He blames the family member to call him for the theft. Rhea accuses Prachi for hiring Somdutt. Abhi tells that he knows both his daughters, they both will never bring disgrace to the family. He trusts Rhea and Prachi as well. Ranbir tells that Somdutt told this statement just before he fainted. Abhi asks them not to fight among themselves, its no use to guess, until Somdutt tells them the truth on getting conscious. Tanu gets a huge shock to see Somdutt caught up by the Mehras. Keep reading to know what happens next.

Tanu asks Pragya to sing a song in the Antakshari. Pragya refuses to sing. Tanu insists her a lot and convinces her to sing, while Abhi plays the guitar for her. Ranbir goes to attend a call. He finds Prachi there. He is left mesmerized seeing her looks. He compliments her that she looks so stunningly beautiful that he can’t stay away from her. He asks her not to look pretty, else it will be tough for him to control his heart and feelings. Prachi realizes once again that Ranbir madly loves her.

Prachi goes away from him by keeping his request. She confronts Rhea about the outfit. Rhea denies the blame. Somdutt gets trapped inside the bathroom. He decides to escape through the window. He doesn’t want to get caught at any price. Pragya and
Prachi sing a song. They get too emotional. Ranbir recalls Prachi and his memorable moments, and misses her, after hearing her sing. She finds him staring from far. She gets conscious and stops singing. Rhea informs everyone about the theft.

Pragya spots the man Somdutt running away. She asks Abhi and Ranbir to follow Somdutt. She thinks Somdutt has some connection with Tanu. Abhi and Ranbir catch Somdutt. They ask him about the theft and the person who called him. He tells them that a family member made him steal the jewellery. Abhi makes him unconscious to he tries to run away. Aaliya informs the police about the theft and calls the cops as soon as possible. Rhea accuses Prachi for the theft in front of Abhi and Pragya.

Abhi supports Prachi knowing she can never do anything wrong. Abhi tells them that they should wake up Somdutt first and then ask him. Pragya finds Tanu getting much tensed. This makes Pragya suspect Tanu. Rhea keeps accusing Prachi, which upsets Ranbir. Ranbir defends Prachi. He rebukes Rhea for her accusing move. Rhea loses her cool and makes a leave. Aaliya finds Prachi taking Rhea’s place in their lives.

Reviewed Rating for Kumkum Bhagya 4th June 2021 Written Update Prachi accused: 3/5 This rating is solely based on the opinion of the writer. You may post your own take on the show in the comment section below.