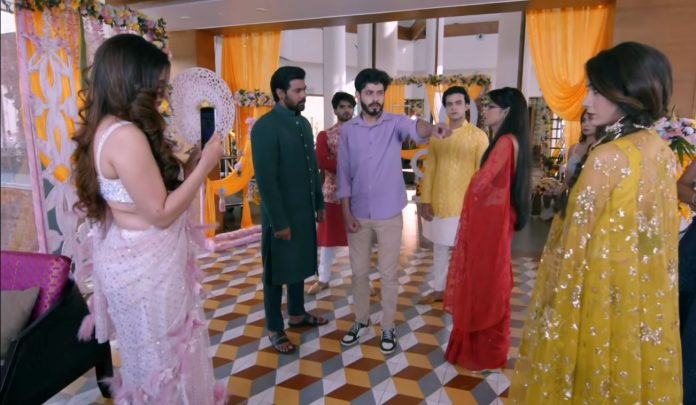 Kumkum Bhagya 5th June 2021 Kundali Top 4 Spoiler Abhi questions Somdutt the truth. He asks who had told him to rob the jewellery. Rhea and Ranbir also ask him the same. Somdutt points towards Tanu, but Prachi is also behind her. Somdutt wants to expose Tanu’s truth, but lacks courage. Abhi insists him to tell the truth. Rhea tells them that Somdutt is still pointing towards Prachi. Prachi gets accused when Tanu changes her place in time. The family is shocked after the revelation.

Ranbir feels terrible seeing Prachi crying after Rhea’s accusations. He tries to pacify her and wipes her tears. Pragya tells Abhi that Tanu seems very nervous, maybe because Somdutt got caught. She tells him that Tanu has some connection with the thief, maybe she has hired him. She wants to get her doubt confirmed. She tells that she is stressed out seeing Rhea and Prachi’s argument. She tells that she wants both her daughters to stay united.

Abhi understands her concern. He also wants their daughters to be united. Aaliya meets Abhi and Pragya. She tells them that they have to figure out Tanu and Somdutt’s connection. Tanu realizes that Aryan and Shahana are keeping an eye on Somdutt to get the truth out. She tries to send them away before Somdutt gains consciousness. She thinks that once Somdutt gets freed, she will get tension free. She goes ahead to set Somdutt free and make a way for his escape. Before she could succeed, Abhi, Pragya and Aaliya reach there.

They start questioning Tanu about Somdutt. Aryan and Shahana tell that Tanu had been lying to them since then. Tanu doesn’t answer anyone, and instead shouts to create a drama. She avoids answering him. Somdutt tries hard to escape, but fails. Abhi threatens Somdutt of dire consequences if he doesn’t tell them the truth. Somdutt worries on getting caught for the second time. He knows that Tanu will not spare him if he takes her name. He remembers Tanu’s orders. He frames Prachi in the crime. He tells that Prachi had called him for the theft.

Rhea gets raged, while Pragya steps in to prove Prachi’s innocence. She calls the cops and gets Somdutt arrested. Pragya gets too disappointed that she lost the chance to find out Tanu’s truth. Tanu shocks her further by asking to attend Abhi and her wedding. Pragya realizes the rushing time. She fears of losing Abhi. What would happen next? Keep reading. Comment your views below.

Hamariwali Good News:
Mukund and Meera have a moment of understanding. Mukund tells her that two people in life love them the most, one is their mother and the other is the life partner. She asks him about the precious relations. He innocently tells her that they should also mean a lot to each other. She decides to befriend him. He wants to win his love. She falls for Mukund. She wants their relationship to be of true and strong friendship, if they can’t become husband and wife.

Kundali Bhagya:
Sherlyn tells Prithvi that she is getting blackmailed once again because of their baby. He asks her if Akshay has come back to blackmail her. She tells that its not Akshay, but Megha. Shrishti fills Mahira’s ears against Sherlyn, who is plotting against her. She asks Mahira to beware of Sherlyn. Mahira angrily confronts Sherlyn. She asks Sherlyn not to lie or refuse, because she knows everything.

Tujhse Hai Raabta:
The kids trouble Asawari while she makes food in the kitchen. Gungun sprays the foam over her saree. She runs away in no time. Moksh picks the bottle and gets caught by Asawari, who blames him. Asawari complains to Malhar about Moksh. Malhar and Kalyani get troubled when Moksh gets accused. Moksh tells them that it wasn’t his plan, but Gungun’s plan to do the mischief. Kalyani doesn’t believe him. She slaps Moksh in anger, leaving him dejected.

Reviewed Rating for Kumkum Bhagya Spoiler 5th June 2021 Kundali Top 4: 3/5 This rating is solely based on the opinion of the writer. You may post your own take on the show in the comment section below.