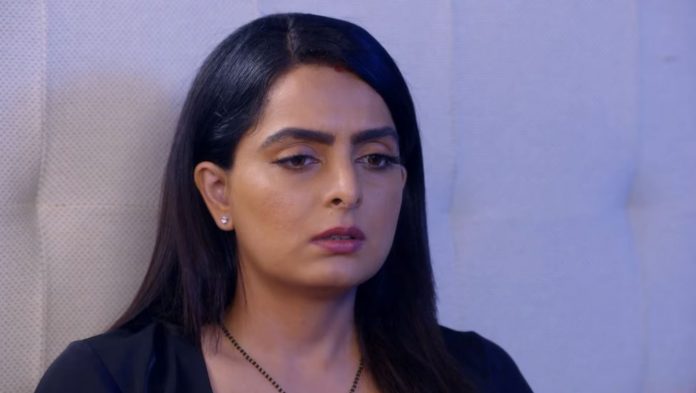 Kundali Bhagya 9th June 2021 Written Update Sherlyn twist Preeta gets the letter which mentions a secret related to Sherlyn’s pregnancy. She tells that nobody knew about Sherlyn’s pregnancy, she had known it first and then Sherlyn cleverly took Rishabh in confidence and revealed the pregnancy news to everyone. Shrishti and Sameer tell her that they also suspected Sherlyn. Being clean-minded, they don’t think that the secret could be about the unborn child’s father. Still, they try hard to find out what the well-wisher aka the blackmailer is trying to state in the letter.

Preeta tells them that maybe its a secret which nobody could imagine, Sherlyn would be hiding a really big secret, else nobody could dare to blackmail her about the pregnancy. They realize that the letter is written by Akshay, but actually its written by Megha. Preeta decides to meet Megha and discuss about the blackmailing chapter. She wants to know if Sherlyn’s truth is known to Megha. Sherlyn finds the trio conspiring something secretly.

She wants to know what is it. She finds something fishy, but fails to interpret their actions. Megha and Ruchika get Prithvi to senses and unmask him. They threaten Prithvi that they will expose Sherlyn and his affair truth to the Luthras. They increase the amount and ask him to arrange 70 lakhs if he wants to save his secret.

Prithvi worriedly leaves from Megha’s place. Megha asks Ruchika why did she increase the amount, its not good to get more greedy. Prithvi comes back to the Luthra house and straight away goes to Sherlyn. He tells her that Megha had threatened him, along with Ruchika, and now that they increased the amount to 70 lakhs. She remembers that Megha had demanded 50 lakhs before. Prithvi feels sorry that he failed to keep their secret.

He tells Sherlyn that he couldn’t get the phone to delete the video. He finds just one way left, that’s to arrange the money and save themselves. Sherlyn is equally worried. Pammi blames Mahira for trapping Sameer in an affair. Mahira can’t believe her ears. Pammi dislikes Mahira. She outrightly warns Mahira to stay away from Sameer. Mahira doesn’t say that she is eyeing just Karan, her love. She gets enraged but stays quiet.

Later, Sherlyn learns about the threats from Megha and Ruchika. She gets too stressed and faints down. Prithvi worries for his love. Preeta gets the news that Karan is being shifted to the new jail. She wants to be with him at that time. Sarla reaches home to meet Preeta. She learns that Preeta and Shrishti are heading to meet Megha. She advises them not to go to Megha, and instead visit Karan first. Sarla and Preeta struggle to meet Karan at the police station, but the inspector refrains them.

He tells that Karan is the culprit for the police, until he gets proved innocent in the court. Sarla requests him to let her meet Karan just once. Inspector refuses to entertain her plea. Preeta asks Sarla to come with her. Inspector asks Preeta to explain Sarla the rules, else he will be forced to throw out Sarla from the police station. Rakhi learns about Sherlyn’s dizziness. She meets Sherlyn to know if anything is bothering her. She does her duty since Rishabh is away. She tells that she can find Sherlyn in a dilemma just by looking at her.

She asks Sherlyn to share the problem with her. Sherlyn doesn’t want Rakhi to know her real motives. She instead tells that she is just facing mood swings in her pregnancy. Sherlyn doesn’t disclose anything. Prithvi overhears them. He later speaks to Sherlyn, who vows to destroy Karan, Preeta and Luthras to fulfill their revenge. Prithvi feels his bold and daring Sherlyn is back again. Sherlyn tells that she remembers what Rishabh and Mahesh did with Prithvi, she will not spare them. Prithvi gets at peace. Keep reading.

Reviewed Rating for Kundali Bhagya 9th June 2021 Written Update Sherlyn twist: 4/5 This rating is solely based on the opinion of the writer. You may post your own take on the show in the comment section below.