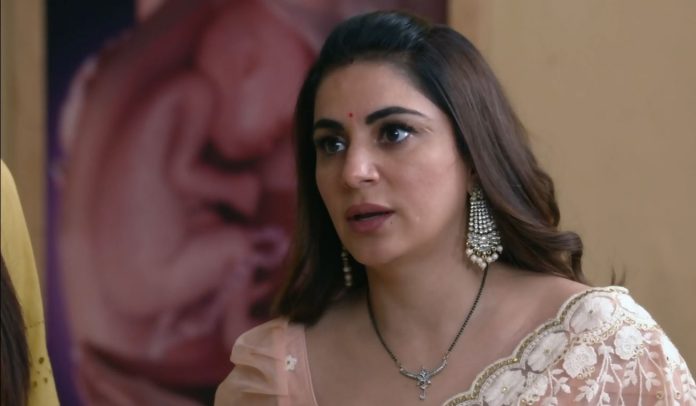 Kundali Bhagya 29th June 2021 Written Update Big reveal Shrishti insists Sarla to get the checkup done. Sarla agrees to get a medical advice. Shrishti asks Sarla and Janki not to tell Preeta about their hospital visit. Sherlyn feels uneasy. She can’t tolerate the sudden pain. She calls the hospital to get an urgent appointment. Shrishti gets Sarla to the hospital. Sarla tells that nobody will welcome them since they aren’t VIPs.

Shrishti worries for Sarla who turns dizzy. Prithvi gets busy in his office. He warns the staff when he finds the company going in losses. Sherlyn calls him up for help. She informs Prithvi that she is going to the hospital for check up. She tells him that she needs his help. He tells that his company needs his time. She tells that she can pay him money, but she needs him. She complains of the pain. She tells that he shall meet her at the hospital, they will meet the doctor together. Preeta meets the doctor who attends Sarla and Shrishti.

Preeta asks Sarla to get the tests done on an urgent basis. Prithvi meets Sherlyn at the hospital. He finds her stable. She tells him that she wasn’t feeling good at home. She wants to get the checkup done if they have come to the hospital. They learn that the regular doctor isn’t available. The nurse informs about Dr. Roshni. Prithvi gets worried hearing Roshni’s name. Sherlyn realizes that Roshni used to be Prithvi’s lover.

Shrishti thanks Preeta for coming and speeding the test process for Sarla. Prithvi asks Sherlyn to just rush. She asks him not to trouble her. He takes her to Roshni’s cabin. Sherlyn asks him to meet the doctor. He wants to wait outside. She thinks he is confused about Dr. Roshni. She meets Roshni, and realizes that Roshni is her college mate, who used to like Prithvi. Sherlyn meets her, who tells her that she remembers Prithvi and Sherlyn’s love story.

She asks Sherlyn if she has married Prithvi. Sherlyn tells that her husband is accompanying her. She wants to shock Roshni by showing Prithvi outside. Preeta feels odd seeing Shrishti upset. Shrishti doesn’t like to bother Preeta by getting scared of responsibility. Preeta asks her not to overthink. Sherlyn makes Prithvi meet Roshni. Shrishti happens to see Prithvi here. She alerts Preeta. Prithvi speaks nicely and covers up for the past truth. Sherlyn pretends further that she is with Prithvi. She makes Roshni angered.

Roshni tells Prithvi that she can understand Sherlyn’s mood swings. Roshni informs them that she also got married, she is happy in her marriage. Sherlyn vents anger on Roshni in an insulting way. Roshni takes Sherlyn for the check up. She asks Sherlyn if there is any stress. Sherlyn doesn’t answer her. She asks Prithvi to just leave. Roshni asks Sherlyn to get the tests completed if she wants the baby’s betterment. Shrishti and Preeta reach the doctor’s cabin.

They spy on Prithvi. Prithvi insists Sherlyn to get the checkup done for the sake of the baby. They miss to see Sherlyn with him. Prithvi gets alert suspecting someone around. Preeta learns the big truth from Roshni that Prithvi is Sherlyn’s husband.

Reviewed Rating for Kundali Bhagya 29th June 2021 Written Update Big reveal: 5/5 This rating is solely based on the opinion of the writer. You may post your own take on the show in the comment section below.