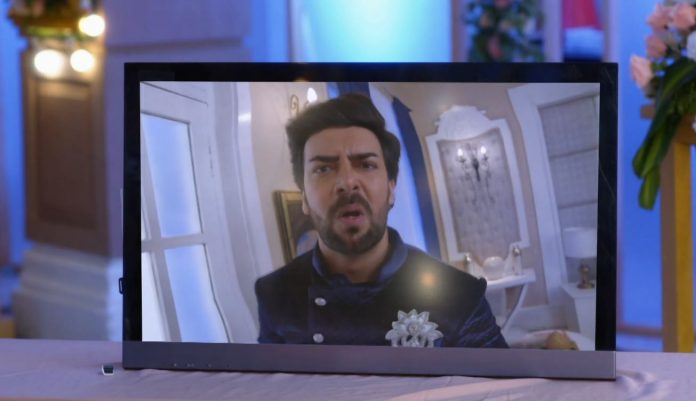 Kundali Bhagya 5th July 2021 Written Update Prithvi exposed Mahesh is very happy that Rishabh is becoming a father. He asks Bani to ward off the bad sight from Sherlyn and the baby. He adds that a baby is coming after 27 years in their lives, his grandchild will be very special. Bani and Kareena ask Rishabh to do the ritual. Rishabh doesn’t know the ritual to ward off the evil eye. The family guides him to perform the ritual. Rishabh meets Sherlyn and tells her that he is asked to perform the ritual for the sake of the baby.

Karan returns home from his boxing practice. He jumps happily on seeing Rishabh back. The brothers unite after a long time. Their happiness reflects as a smile on the family member’s faces. Karan tells Rishabh that its a big surprise for him. Rishabh tells that he needs to talk a lot to Karan. Mahesh asks his sons to have a tea party with them. Rishabh tells that they will share some drinks. Sameer joins them.

Preeta rejoices seeing the scare on Sherlyn’s face. She signals Shrishti that she had warned Sherlyn well. Mahira keeps an eye on Arora sisters. Preeta feels Sherlyn will react in anger and fight with Prithvi. She wants Sherlyn’s truth to come out by her own mistake. Sherlyn tells Sanjana that she has some urgent work. Sherlyn rushes to meet Prithvi. Sherlyn meets Prithvi.

He tells her that Rishabh, Kritika or anyone else shouldn’t see them together. Sherlyn takes him to Rakhi’s room. She locks the door. She demands Prithvi to tell her the truth. She asks him why did he tell their secret to Preeta. She wants to get her answer. Shrishti asks Preeta if she had put the recorder camera in the gift. Preeta had successfully bugged the necklace. Shrishti wants Rishabh to know Sherlyn’s truth. Preeta tells that Sherlyn has no idea about the bugged necklace. She knows that Sherlyn will fight Prithvi.

They both speak out their plan openly for Mahira to hear it. Shrishti tells that she had arranged a big screen to show the live telecast of Sherlyn and Prithvi’s drama. Prithvi tells Sherlyn that he didn’t tell anything to Preeta. Sherlyn calls him mad for Preeta. He tells her that Preeta is cheating them to weaken their relation, they are one, they can’t be separated. He asks her to believe his truth.

Mahira secretly spies on Preeta. Shrishti set ups the camera. Kritika asks her what is she up to. Shrishti looks for the remote to play the recording. Rakhi and Kareena praise Rishabh’s maturity that he understands everybody’s feelings and keeps them happy. Shrishti tells the family that she wants to show them some big drama. She gets stressed when the screen gets blank, because of the camera losing signal.

Sanjana fears that Shrishti is taking a step against Sherlyn. Prithvi tells Sherlyn that he loves her more than Preeta and Kritika. He tells her that he will never love Kritika after marriage. Preeta wants to save Kritika’s life. Rishabh tells Rakhi that his documents bag is missing. Preeta goes to help Shrishti in getting the truth out. The entire family watches Sherlyn and Prithvi’s moment. Prithvi tells Sherlyn that he cares for her. Sherlyn refuses to take his help. Kritika shatters hearing Prithvi admitting love for Sherlyn.

Rishabh calls it enough. Sanjana defends her daughter. Rishabh and the family rush to Rakhi’s room to catch Sherlyn and Prithvi red-handed. Rakhi asks Preeta what is she showing them, instead a surprise for Rishabh. Preeta doesn’t want Rakhi to spoil her health. She adds that Rishabh will handle everything. Rishabh and Kritika run to find the truth. Shrishti stops Sanjana and insults her.

Sherlyn asks Prithvi not to care for her, and instead think of Kritika who he is going to marry. Rakhi, Kareena and Bani find Prithvi imposing himself on Sherlyn. They believe Sherlyn is innocent, when they find Sherlyn making Prithvi away. Sherlyn falls down on the floor, feeling suffocated after the argument. Rishabh barges into the room to find Sherlyn fallen unconscious and needing aid. He confronts Prithvi for locking the door and troubling Sherlyn. Will Sherlyn secure herself and get Prithvi trapped alone? How will Prithvi save himself from getting ousted? Comment below and keep reading.

Reviewed Rating for Kundali Bhagya 5th July 2021 Written Update Prithvi exposed: 5/5 This rating is solely based on the opinion of the writer. You may post your own take on the show in the comment section below.