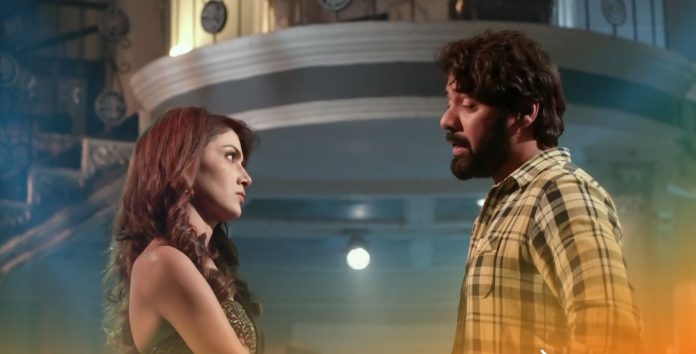 Kumkum Bhagya 12th July 2021 Written Update Amazing twist Pragya insults Abhi in a demeaning way on his status and power. She has attained much power and comparatively higher status than he once had when he was a rich man, just to defeat him in business. She now pities him that he isn’t able to get ahead with the battle, he is already out of the battleground because of his poverty. She tells that he has no business that she could ruin. She laughs at his poor state, which he chose himself by choosing Tanu over her.

She tries to teach him a lesson that money can’t buy love, he had rejected her true love and today he is facing struggles in his life. Abhi doesn’t like to see her hatred-filled eyes. He tells her that her rudeness is affected his heart. He adds that she can never get ahead of him in terms of money, status and power, whatever she has attained will get flat when he comes to his real form. He tells that he had left the richness himself, because she wasn’t in his life, he had no willingness to earn everything he lost after losing her.

He tells her that if he becomes the rockstar Abhishek Mehra again, he is capable to show her the real place where she belongs. He tells her that her rich lady’s getup, money and power are just temporary things which she has acquired just to demean him. He doesn’t like her evil motives behind achieving so much.

He tells her that when he was rich, when he used to earn name and fame, it just not to demean anyone, but to take himself to new heights, he never looked down at anyone with insulting intentions. He explains her the difference between right and wrong. He knows that Pragya’s temporary status won’t last long, while he can achieve his lost status back to show her. He tells her that if she decides to take revenge on him, then he will change her decision. He adds that he will end ego and stubbornness as well.

Moreover, Abhi challenges her that he will stop the auction. He further adds that Pragya won’t be able to do anything against him, she won’t be able to sell his house against his wish. Pragya takes his challenge. She wants to see how he stops the auction by his own efforts. It will be amazing to see how Abhi stops the auction using his past fame and reputation. The track is going to become interesting with Abhi attaining his lost house and business to defeat Pragya. Do you find the show getting back to the right plot? Comment your views below. Keep reading.

Abhi tells Pragya that he doesn’t like her behavior. She tells him that she isn’t his Fuggi, she isn’t the same Pragya. He tells her that she will still say the same Pragya, even if she changes her look. She tells that she has changed her thinking, he doesn’t mean anything to her now. She adds that her life motives have changed, she has become a successful businesswoman, she knows to make his loss her profits, she doesn’t love him anymore, she can live without him, she hates his presence around.

She tells that her bad nightmares still affect her and break her down. She is hurt by his emotional strikes at her heart. He asks Pragya not to cheat his senses. He wants to know what does she want. She doesn’t want him to follow her and waste her time. She claims that she has everything except time. He tells her that he had everything in the past, now he has nothing, he left the house when he didn’t have Dadi and Pragya with her. He finds it hard to leave the house seeing Pragya back.

He requests her to stop the auction of the house which holds their memories. She tells him that she doesn’t want any memory which is linked to him. She wants to sell the house and get rid of the memories as well. She wants to return everything he gave her, the same pain. He wants answers from her. He questions her to know his mistake. She doesn’t want to have any emotional connect with her. Tanu created the huge misunderstanding between them.

Abhi asks Pragya if she has come to take revenge. She admits that her fate has done her work beforehand, fate has ruined him down, he isn’t at the top, he is nowhere seen in the business circle. She wanted to get happiness by ruining him, but she feels its worthless to spend time on her revenge with a loser. He tells her that he is still grounded, he is alive, he isn’t dead, he didn’t lose, he still has the same calibre to fight the fate and win. He has courage to make his fate again.

He gets love and strength from his family. He declares that he also knows change, he can bring a storm in her life and ruin her down if she dares challenge him. He tells her that he is strongly rooted, he can never break down, he can defeat her anytime he wants, her business, status and money will fade down once he comes in the competition. He wants to ruin down her ego and prove his capabilities. He declares that he will stop the auction. Sushma asks him how will he earn money to buy the house.

She advises him to go home and forget the house. Abhi wants to fulfill his promise. Pragya knows that Abhi has nothing to lose, but if Abhi regains everything and opposes her, then she will never spare him.

Pragya tells Sushma that things got clear for her when she met Abhi, she is very sure that she wants to sell the house and get rid of the terrible memories. Abhi tells Sushma’s assistant Anjana that he is Pragya’s husband, this Mehra mansion belonged to him before. He clarifies that he wasn’t kissing Pragya, he was just going to give mouth-to-mouth resuscitation for saving her life.

He takes Anjana’s help against Sushma. He asks her to lie to Pragya that he left from the auction. Anjana informs Pragya that Abhi left. Abhi arrives in the auction in a disguise. Pragya and Sushma aren’t aware of his disguised presence. Sushma asks Pragya not to fall weak. Pragya is hurt by Abhi’s deceive. She doesn’t want to trust anyone. Abhi bids for the house. Tanu and Aaliya get stuck on the way when the taxi breaks down. They wanted to meet Abhi at the Mehra mansion auction event. Abhi wins the bidding at the great amount. Abhi feels they are idiots to sell his house to him. Pragya goes to congratulate him. Will Abhi get caught? Keep reading for further updates.

Reviewed Rating for Kumkum Bhagya 12th July 2021 Written Update Amazing: 5/5 This rating is solely based on the opinion of the writer. You may post your own take on the show in the comment section below.