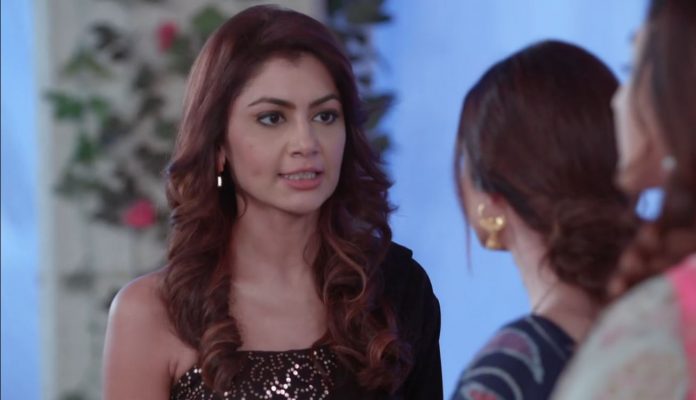 Kumkum Bhagya 14th July 2021 Written Update Battle on Tanu and Aaliya barge into Mehra house and disrupt the auction house, only to face humiliation from Pragya. Sushma asks Pragya if Tanu is the same woman who had stolen her purse. Pragya tells that Tanu is Abhi’s wife, and Aaliya is Abhi’s sister, both of them tried to kill her. Sushma doesn’t want to spare them. Pragya stops her from reacting. Sushma asks her to take her revenge right away. Pragya asks her to keep patience. She doesn’t want to make any wrong move. She tells that Tanu and Aaliya will never confess their crime.

She wants to know their intentions. She tells Sushma that she has changed now, she can answer them. Pragya goes to answer them. She asks Tanu by what right is she stopping the auction. Tanu tells that she has come to stop the auction by the rights of the property owner. Sushma asks them to get out, the bungalow belongs to her. Aaliya asks Sushma to relax and know the truth of the real owners. Tanu and Aaliya tell the bidder that the house can’t be sold. Sushma asks Mr. Ravi to sign the papers and complete the auction process.

Aaliya tells that the house belongs to them. Tanu threatens to call the police. Sushma asks her to know the law first. She tells the media that Aaliya and Tanu want to get the property by fraud, just like Abhi had come. Aaliya asks Sushma not to interfere between Pragya and her matter. Sushma tells that she is Pragya’s mother. Tanu and Aaliya laugh on Pragya who always comes back with a new relation in life. Pragya insults them to live relations in instalments. Aaliya asks her if she is living relations for her greed.

Pragya answers them about her relation with Sushma, which isn’t breakable. Aaliya shows the real property papers to the bidders. She tells them that bungalow was snatched from them in a court case, but they didn’t sell it to anyone till now. Tanu asks Pragya to know that she can’t have ownership of anything that actually belongs to others. She tells that she will defeat Pragya. Pragya asks her not to worry, she isn’t interested in useless Abhi. She tells the bidders that she had bought the property from her business associates Thapars.

Furthermore, Aaliya and Tanu invite the bidders in the auction if they keep the event by deciding on the property. She asks the media to report Pragya’s fraud. She tells Pragya that she isn’t useless, she can still fight for her rights. Pragya tells Aaliya that she doesn’t want her rights, she wants justice for someone who got cheated by her loved ones. She tells that she will take revenge on them who did wrong with her. She asks them to know that she is a big problem for them.

Elsewhere, Siddharth and Vineet go to a night club. Siddharth spots Rhea there. He loses his heart to her. Vineet finds him interested in Rhea. Siddharth wants to know if she likes someone. Vineet gives him hopes that he can get Rhea’s love. On the other side, Ranbir and Prachi enjoy their candle light dinner. He tells that he wants to capture this moment and remember it all his life. She tells him that she is lucky enough to get him in her life. She is glad that he married her.

He tells her that he got to know the truth in time, else he would have married Rhea. He wants Rhea to get some guy like her personality, not anyone sincere like Siddharth. He doesn’t think Siddharth and Rhea make a good pair. Rhea observes Siddharth staring at her. She doesn’t want him to get a wrong sign. Vineet asks him to go and ask Rhea for dance. He asks Rhea’s friend if Rhea is single. Rhea’s friend tells him that Rhea is very much single. She understands that Siddharth is interested in Rhea.

Vineet asks Siddharth to initiate a talk with Rhea. Siddharth wants to show Rhea to Ranbir on a video call and get her approved first. He knows Ranbir will select the best girl for him. Ranbir and Prachi share the romantic moment. They don’t notice Siddharth’s calls. Pragya is sufficient to fight with Tanu and Aaliya. She further insults them for their poverty. She tells that they can never return to the bungalow. Tanu tells that they have a house in the chawl. Pragya stops them from shouting on Sushma. Sushma can’t believe that Pragya used to live with such disgusting people.

Pragya tells that she didn’t come to show off her money and power, she didn’t come to just sell the bungalow, she has actually come to ruin them and take her revenge. She asks them how did they feel seeing their biggest enemy back. She wants to know their feeling on seeing her alive. Tanu tells her that Pragya isn’t the same, Pragya who loved Abhi has lost him forever. She tries to weaken Pragya by reminding the old love flame. Pragya doesn’t fall weak. She tells Tanu that old Pragya is dead, she has nothing to lose, everybody should be scared of dangerous side. She doesn’t want to pity their poor state and forgive them. What will Pragya do now when Tanu and Aaliya failed her auction move? Keep reading and leave your comments below.

Reviewed Rating for Kumkum Bhagya 14th July 2021 Written Update Battle on: 4/5 This rating is solely based on the opinion of the writer. You may post your own take on the show in the comment section below.