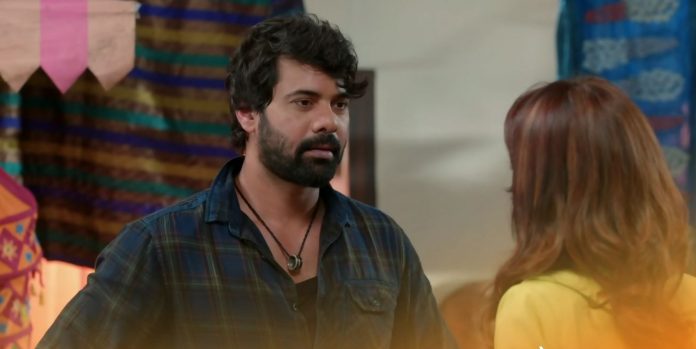 Kumkum Bhagya New love story Abhi Pragya Upcoming Ranbir informs Pallavi that Siddharth has fallen into a big problem because of the girl he met at the pub. Pallavi tells him that Siddharth will marry the girl she chooses, if Siddharth chooses the girl himself, then she will throw him out of the house. She adds that she will not forgive Siddharth as she didn’t forgive Ranbir. Siddharth is thankful to Rhea for saving him. Rhea tells that he should have fought for himself. Siddharth asks her for coffee. She refuses to his request. Rhea meets him again and tells that she has come back to end the constables’ doubt.

She doesn’t want to land in the jail by getting caught in the drama. She adds that they shall pretend to be husband and wife to get saved from the police. Siddharth and Rhea leave in the taxi, while the constables track them. The drug dealers meet and mention about Siddharth, who had carried the drugs with him unknowingly. They want to get the costly drugs back from Siddharth. Constables tell Inspector that Siddharth and Rhea have left in the same taxi, they would be husband and wife.

She tells him that she will leave in some time, by ensuring that nobody is keeping an eye on them. Siddharth thanks her again for saving him. He asks her if she really thinks he is innocent. Rhea adds she has seen Jenny putting the drugs in his pocket. Rhea and Siddharth share a moment when they dance together. Rhea tells him about her friend Ranbir, who isn’t there in her life anywhere. When she tries to leave, she sees the constables outside. Siddharth mentions that the constables have come looking for them.

Ranbir and Prachi wait for Siddharth’s call. They try to call Siddharth at the hotel’s number. The constables stop all the incoming calls at Siddharth’s room landline. Prachi is shocked when Rhea is seen on the news channel. She tells Ranbir that they shall find Siddharth and Rhea as well. She exclaims that Rhea is her sister, her blood, she can’t get rid of her blood relation. Ranbir doesn’t want to stop Prachi. He understands her. Rhea doesn’t want any complications in her life. She tells Siddharth that she isn’t interested to have any relationship with him.

He asks her if she can be his friend. She tells that friendship is also a relationship. She wants to end it on a good note. Siddharth finds more drugs in his pocket. Siddharth and Rhea get worried on the shocking find. She stays back to save Siddharth from the mess. A new love story begins between Rhea and Siddharth.

On the other hand, Abhi and his friends sit for a carrom match. Abhi enjoys with them. Abhi wins the match. He celebrates with his friends. Pragya happens to meet Abhi. She finds him really happy, even in his poverty stricken life. She challenges him that he can never defeat her, since she has build a big empire. He feels confident that he will win over his queen. She tells him that she will not even give him a chance to smile.

Reviewed Rating for Kumkum Bhagya New love story Abhi Pragya Upcoming: 1/5 Hopeless track This rating is solely based on the opinion of the writer. You may post your own take on the show in the comment section below.