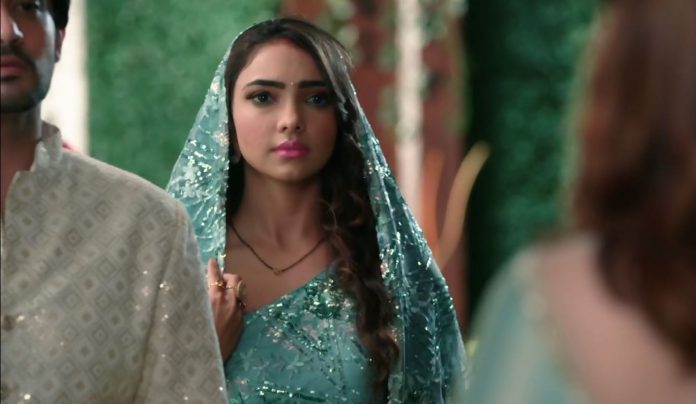 Kumkum Bhagya 20th July 2021 Written Update Rhea returns Pallavi has many hopes from Siddharth, that he would marry the girl she chooses for him, unlike her son Ranbir who didn’t care for her choice and went ahead to marry Prachi against her wish. Ranbir loves Prachi madly, so does Siddharth falls for Rhea. Siddharth’s innocence somehow attracts Rhea, though she claims to just help him out of the drugs peddling case.

Siddharth always wanted a wife like Prachi, someone who is Prachi’s replica. He finds Rhea appealing, even though she isn’t any match to Prachi’s qualities, but just matches Prachi’s blood line. Siddharth and Rhea fake their marriage to get saved from the police. They have to produce a proof in front of the police that they are married. Ranbir learns that Siddharth has run away. He then goes to help Siddharth. He also testifies that Siddharth is married. Ranbir and Prachi are shocked to see Rhea with Siddharth.

Rhea stops Pallavi from rebuking Siddharth. Pallavi is hugely shocked to see Rhea as Siddharth’s bride. Rhea wants to explain Pallavi the situation where she had to fake the marriage with Siddharth. Rhea cleverly plotted her re-entry to fool Ranbir. Rhea returns in Ranbir and Prachi’s lives to create a havoc and is just using Siddharth in her plan. Ranbir and Prachi stay alert of Rhea. They don’t want her even in Siddharth’s life. Will Rhea really ruin Prachi’s life again, or fall for Siddharth’s innocence? Comment your views and keep reading.

Siddharth and Rhea try to run away from the goons, who chase them to get the costly drugs. They miss to see Prachi there. Even Prachi doesn’t see them hiding behind the car. Siddharth tells that not just the police, even the goons are after them. Rhea asks him not to go in front of them. Bob doesn’t want to spare Siddharth. Prachi asks someone about Rhea. The lady tells that she just saw Rhea around. Ranbir cooperates with the police. He calls Prachi to update her that Siddharth has escaped from the police.

Siddharth is at Rhea’s house. He asks Rhea if her place is safe. Rhea prays that police doesn’t have her address. She fears that the drug sellers are much dangerous. Siddharth tells that they will get married and show the marriage pictures as a proof for the police. She asks how will they have a fake marriage. She isn’t interested in any fake drama. He asks her to take help from her family. She tells that she can’t inform her family about the drug case. He tells that his brother would have helped them. She tells that his brother would be just like him, a shy person. He praises Ranbir, a smart heroic person.

She asks his name. Siddharth gets terrified to see the goons reaching the house. Rhea and Siddharth trick the goons and run away. Ranbir and Prachi miss to see them again. They find the house vacant. Ranbir tells Prachi that the door bolt is broken, it means Siddharth is in danger, some goons are after his life. He feels Siddharth is still safe, since he escaped. Prachi gets Rhea’s bracelet there.

Reviewed Rating for Kumkum Bhagya 20th July 2021 Written Update Rhea returns: 1/5 This rating is solely based on the opinion of the writer. You may post your own take on the show in the comment section below.