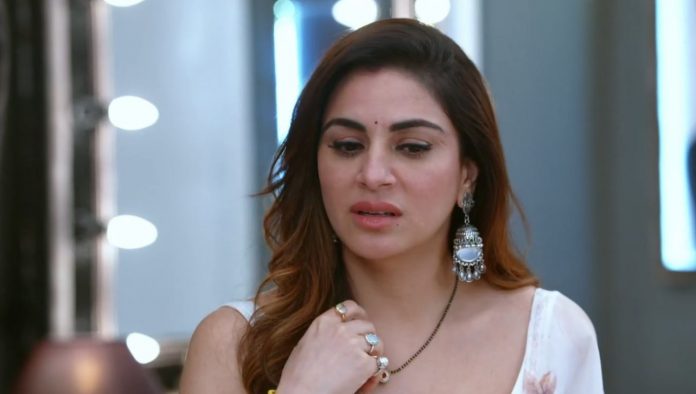 Kundali Bhagya 20th July 2021 Written Update Pregnancy twist Rakhi tells Karan that he is soon going to become a father. Karan gets overjoyed. Kareena finds Shelryn upset. Rakhi tells that Preeta is pregnant. Preeta come back and apologizes for upsetting them. Rakhi congratulates Preeta for having the pregnancy symptoms. Kritika asks Rakhi how is she so sure about it. Rakhi tells that mostly girls go through the same girl. She finds Preeta’s face glowing since she is carrying a new life. Preeta gets glad to know that she is pregnant.

Bani hugs Rakhi and congratulates her. The family shares happy moments. They want a new start for their family’s Kundali Bhagya. They get thankful to Preeta for giving them a good news. They want to give the good news to Mahesh, and end his madness. They don’t want Mahesh to stay locked in his room. Rakhi wants to tell the news to Sarla first. She tells that its her right to give her the news. Sherlyn tells Karan and Preeta that she will get sweets and celebrate. Kritika wishes Karan and Preeta all the best for a new start.

She runs to give the good news to Prithvi. Karan is much pleased and kisses his sweet wife Preeta. He thanks her for giving them happiness. She tells that they shall confirm the news once. She asks him not to ignore his work. Rakhi goes to meet Sarla and Janki. Rakhi’s smile brings positivity in Sarla’s house as well. They are glad that Rakhi is okay. They didn’t expect Rakhi to come. They want to know the reason for Rakhi’s arrival.

Rakhi tells Sarla that things are perfectly fine. Janki asks Rakhi to stay happy and smiling always. Rakhi tells that she was staying upset, but she had to come today for the sake of Karan and Preeta’s matter. She tells that she got a reason today to come to them. She pulls Sarla’s leg by weaving a silly story of Karan and Preeta’s fights. Sarla asks Shrishti and Janki not to give their foolish opinions. Janki wonders if Karan has any affair, that he is not finding Preeta beautiful today. She sings praises of Preeta.

Sarla tells Rakhi that she knows Karan well, he will never hurt Preeta. She can’t spare Karan if he makes Preeta cry. She cries for her daughter’s future. Rakhi ends the prank and laughs. Sarla asks what is the matter. Rakhi asks them not to get afraid, she was just joking. She explains Sarla that Preeta is gaining weight because of a new offspring coming, Preeta is pregnant. Sarla, Janki and Shrishti get happy receiving the good news. Rakhi gets sweets to feed them. Sarla tells that Preeta didn’t tell her anything.

Rakhi adds that she wanted to give the good news herself, and stopped Preeta from making any call. She wants to celebrate Bani’s birthday and the new baby’s good news at home. She invites Aroras in the party. Sarla cries with joy. Rakhi tells that Preeta has ended all the sorrow and gave her a reason to live once again. Sarla, Janki and Shrishti celebrate on their side, after Rakhi leaves. Bani pampers Preeta, which angers Shrishti. Karan tells Preeta that everybody is family. Preeta is tensed that the news isn’t confirmed.

She tells Karan that they shall get the pregnancy test done. Karan agrees to her. He adds that she is surely pregnant. Sherlyn calls up Prithvi to tell him the good news. He tells her that Kritika can never get pregnant, since he moved to Dubai on his wedding night itself. He further tells that he will kill Kritika if she gets pregnant. She clears his doubts saying that Preeta is pregnant. She mentions that she has sent him away from Kritika, because she is possessed with him. Prithvi gets angry that he isn’t able to stay with his wives, Sherlyn and Kritika, and also his lover Preeta. He hates Sherlyn for doing injustice with him.

Kritika informs him the same news that Preeta is expecting. Prithvi tells that he knows the same thing. She asks him how does he know about it. He tells that its common logic, since Karan and Preeta are the only couple staying together. Sherlyn gets angry seeing Kritika talking to Prithvi. She calls him and rebukes. Prithvi puts Kritika’s call on hold. Kritika is befooled again. Shrishti wants to speak to Preeta once.

Sarla asks her to hold her happiness and hug Preeta personally when they meet now. She shares her happiness with Shrishti. Prithvi gets stuck between Sherlyn’s anger and Kritika’s love. He apologizes to Kritika. He finds her upset. She tells him that she doesn’t like Sherlyn these days, Sherlyn was shouting on Rishabh on the call. He can’t say that he was bearing Sherlyn’s anger. She asks him not to take Sherlyn’s side all the time. He pities himself. Is Preeta really pregnant or not? Is her fear of spoiling the family’s happiness true? What twist will come in Preeta’s assumed pregnancy? Comment your views. Keep reading.

Reviewed Rating for Kundali Bhagya 20th July 2021 Written Update Pregnancy twist: 3/5 This rating is solely based on the opinion of the writer. You may post your own take on the show in the comment section below.