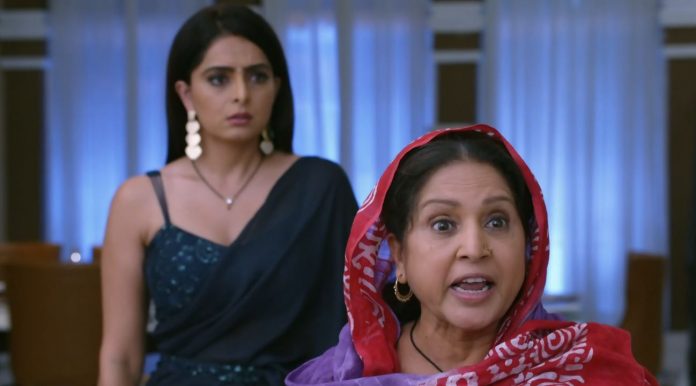 Kundali Bhagya 27th July 2021 Written Update Lesson time Sarla asks the matter from Janki and Shrishti. Janki tells Sarla that its not a little issue, but its a big crime. She feels disgusted to even mention about Sherlyn’s act. She tells that Sherlyn has tried to wrong Preeta. Rakhi and Bani get worried knowing Sherlyn has tried to hurt Preeta. Preeta has promised Sherlyn to hide her crime from the family and befriended her. She stops Janki from revealing anything further.

Preeta takes Sherlyn’s side and protects her from the accusation. Sherlyn gets relieved that Preeta has saved her from the family’s wrath. Bani realizes that Sherlyn is depressed over losing her child. She asks Sherlyn to stop worrying, she can conceive once again and get a baby soon. The family plans to leave for Lonavla. They get excited and board the bus.

Sherlyn sticks with the elders to win their heart, after all the mess Janki had created. Bani sympathizes with Sherlyn further. She asks Sherlyn to always remember that life has ups and downs, a person has to face both happiness and sorrow, the phase of sorrow maybe long, but it soon subsides. She tells that time never stops, it always passes. She gives hope to Sherlyn that happiness will soon come in her life in the form of her baby. Sherlyn can’t tell the truth to anyone that the baby never belonged to Rishabh, as they all assume.

She hides about Prithvi and her baby. Bani tells that sometimes sorrowful phase is longer, but lights will surely come after the darkness. She tells that ray of light will also enter Sherlyn’s life. She asks Sherlyn to never lose her heart and walk on the path of wrong. She tells that Preeta is giving a big happiness to the family, for which they all are grateful. She wishes Sherlyn to give them the same happiness. Will Sherlyn understand Bani’s words and leave her evil revenge? Keep reading for a detailed update. Leave your comments below.

Janki tells the family about Sherlyn’s bad act. Kareena enquires the matter. Sherlyn asks Janki what is the matter. Janki tells her that when she joined as a helper to Sarla, then she used to feel bad like a servant, but she has realized with time that Sarla has made her a part of family, Sarla has given her much respect. She tells that Sarla wasn’t bad, but Sherlyn is really bad at heart, she is just like she appears, she hates Preeta even today. She accuses Sherlyn. Sherlyn acts ignorant of the matter.

Janki tells that she isn’t a crazy woman to shout on her. She adds that she got to know her disgusting act. Kareena rebukes Janki for insulting Sherlyn. Rakhi and Bani ask Janki to calm down and tell them the matter. Sherlyn tells that she didn’t say anything to Janki. Janki asks Shrishti to speak up and shut Sherlyn’s mouth. She stops Preeta from changing the topic. Sarla wants to know the matter at once. Janki tells her that Sherlyn has done a disgusting thing with Preeta.

She reveals that she had overheard Shrishti and Sameer’s conversation. She asks Shrishti to not keep quiet, at least for Preeta’s sake. Kareena asks Janki to come to the point. Sherlyn tells them that its just a misunderstanding between Preeta and her. She apologizes to Preeta in front of the family. Kareena asks the reason for her apology. Sameer tells the family that Sherlyn was upset yesterday.

Janki tells that Sherlyn can’t hurt anyone if she is upset. She asks Preeta to tell the truth to the family. Sherlyn requests Preeta to not reveal anything. Janki tells that she will not spare Sherlyn. Preeta asks Janki to forget the matter, she is absolutely okay. Janki shouts out to tell Sherlyn’s truth. Shrishti and Preeta interrupt Janki. Shrishti tells that Sherlyn always orders Preeta to do household work, its a little thing. She asks Janki to stop the revelation. Janki angrily leaves from the Luthra house. Shrishti tells Sarla that Janki just drags any little issue to the core.

Preeta apologizes to Janki. Janki asks her why didn’t she keep silence when her babies were in danger because of Sherlyn. Preeta tells that the family will get worried, their smile will vanish hearing this negative thing. She asks Janki to forget the matter, she will always protect her babies. She promises to take care of herself. Sameer also gives an assurance to Janki. Karan comes home and meets Janki. Janki makes Karan promise that he will take care of Preeta and the babies. Karan promises her.

Rakhi tells Karan that Preeta was waiting for him since a long time. She asks Karan to take Preeta to the doctor. Preeta tells that he can go for his practice first. He cancels his practice for the doctor’s visit. Bani invites Sarla and Shrishti for the trip. Sarla tells that she has much work, she can’t accompany them. Rakhi also insists Sarla. Sarla tells that she will come next time. Next day, Luthras get excited seeing a lavish comfortable bus arranged by Mahesh. He learns that Rakhi is still spending time in the babies room. He asks Sameer not to tell about his joke on Rishab and Karan.

The family laughs that Karan can get jealous of his own baby when they love the baby more than him. Kareena feels Bani is very excited for the road trip. Bani tells that they are going together after a long time, they will have plenty of snacks and fun on the way. She speaks to Sherlyn and gives her hopes of happiness. She tells Sherlyn that very soon she will get her baby, she needs to keep patience and stay happy. Sherlyn acts to oblige. She feels she isn’t happy in her heart, everybody is just thinking of Preeta. She hates Preeta so much that she wants to kill her. She doesn’t mend her ways.

Preeta is suggested some tests by the doctor. She goes for the tests. Rakhi stays busy in arranging the room for the coming grandchildren. Mahesh tells that they will be welcoming little Karan and little Preeta home. Rakhi tells him that the babies will be very naughty. He calls Preeta and asks her to share the reports with them. Preeta tells that she is awaiting the reports. Mahesh is thankful that Preeta has given them a big happiness. Karan finishes his work in the office. Mahesh adds Karan in the group call. Mahesh and Rakhi thank Karan as well for making them grandparents.

Mahesh asks Karan and Preeta to come home. Rakhi plans a surprise for Preeta. Mahesh wants to know about it. Rakhi tells that she won’t tell anything to him. She adds that she loves Mahesh, but she loves Preeta more than him. Preeta speaks to the doctor, who asks her who has confirmed her pregnancy. Preeta tells that she has got the pregnancy confirmed by doing a pregnancy test at home, and also through the family’s trusted Daima. Doctor worries to tell her that she isn’t pregnant. Preeta is super shocked to know that she isn’t pregnant. She can’t ruin the family’s happiness. What’s the truth behind the shocking find? Comment your views.

Reviewed Rating for Kundali Bhagya 27th July 2021 Written Update Lesson time: 3/5 This rating is solely based on the opinion of the writer. You may post your own take on the show in the comment section below.