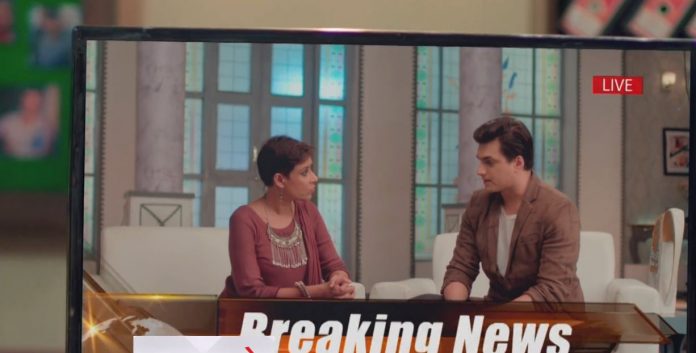 YRKKH Upcoming Breaking News Kartik Sirat controversy Dadi convinces Kartik to give a statement in the media. A TV journalist Aradhna takes the matter in her hands to dig out the truth in Ranvir’s murder case. She also suspect that Sirat has poisoned Ranvir, as Chauhan has produced false reports. Chauhan is ready to pay any amount to the media to create more troubles for Kartik and Sirat. Aradhna tells that she is doing this to get justice for Ranvir, not for money.

Kartik feels helpless that he isn’t able to help Sirat and bail her out from the jail, just because his family doesn’t want his name to come in the murder case. He isn’t afraid to get involved, but isn’t permitted by Goenkas to help Sirat. Kartik makes his mind to speak to the media. He tells Manish that he will talk to the media and give a statement, but he will decide what he has to say, he will not follow any speech written by their legal advisor. Manish asks Kartik if he has thought well of his statement.

Meanwhile, Aradhna arrives at Goenka house to meet Kartik and speak on the case. Kartik speaks in Sirat’s favor and shows his gratitude. He reveals the past story, how Sirat became a part of his life because of her face resemblance to his last wife Naira Goenka. Aradhna finds a new cue. She questions Kartik if he has fallen for Sirat just because she looks like Naira. Kartik gets perplexed by her remark and doesn’t know what to say. He knows that Sirat had fallen in love with him, but he never developed any such feelings for her.

He tells that he can never love anyone else than his Naira. Sirat watches Kartik’s interview playing on the tv in the police station. She feels guilty of putting Kartik through this test. He takes the help of the media to clean Sirat’s name. Kartik tells Aradhna that Sirat is just his friend, he will do a friend’s duty and save her from the mess. He doesn’t want the media to trouble Goenkas. He sticks to his promise to Ranvir that he will always protect Sirat. He tries to meet Sirat at the police station.

Sirat accuses herself that she didn’t give any happiness to Kartik, when he always supported her. She cries for Ranvir, and also Kartik seeing him struggle with the police officers. He hides from the photographers when he goes to meet Sirat. He finds Sirat crying. He signs Sirat to rest assured, he is always with her. Kartik decides to prove Sirat innocent, even when he knows that the task won’t be easy. How will Kartik bring himself out of this mess, and also save Sirat? Keep reading.

Reviewed Rating for YRKKH Upcoming Breaking News Kartik Sirat controversy: 3/5 This rating is solely based on the opinion of the writer. You may post your own take on the show in the comment section below.