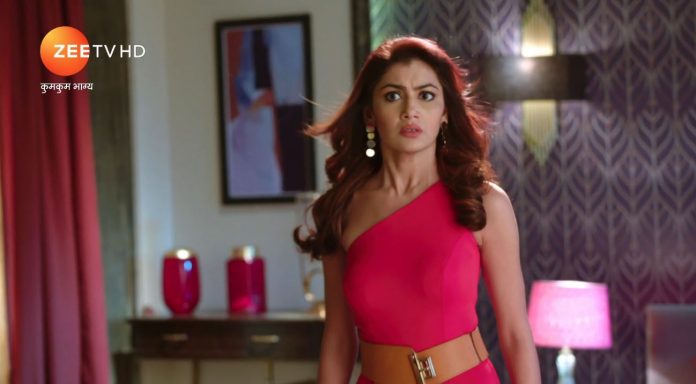 Kumkum Bhagya 28th July 2021 Written Update Accident Abhi tells Pragya that the place and the guy aren’t for her. She asks him how does he know about it, how can he be sure. She tells that she doesn’t need any guard or any goon like him for her security. She adds that she knows very well from who she shall stay safe. She tells that he is just a stranger for her, he should not interfere in her life. She hurts him rudely. She cries further adding that he doesn’t mean anything to her.

He tells that he heard Gautam talking about her, he can’t tolerate anyone getting close to her. He wants her to be grateful. She threatens of calling the police. She tells Abhi that maybe she likes Gautam and wants to go close to him. He asks her not to think of anyone else, she is just of mine. She clears out that she is nothing to him now, his Pragya is dead now, she has no place for him in her world. He replies that she can’t be his Pragya, who can’t hurt her.

He exclaims further that his Pragya just knew to spread love, but she knows just hatred now. He asks her to be happy in her world, he will never come to protect her. She asks him to end the matter before leaving. She takes Tanu’s name and stops him. He tells that the matter is over, she likes Gautam and should accompany him in his car. Abhi takes the car keys from her and leaves. She asks the guards to look after Gautam and call a doctor.

Pragya rushes after Abhi to stop her. He tells her that she can’t defeat him with hatred, he can just be in control with love. He wants to have a war now and fight with her to defeat her. Pragya is also ready for the war. Sushma goes towards the farmhouse. Abhi meets Sushma on the way. He asks Sushma to keep Pragya away from Gautam. Sushma tells that Pragya needs to stay away from him. Abhi takes Pragya’s car against their wish. Sushma wants to know from Pragya what Abhi has done. She reaches the farmhouse. She finds Gautam injured.

Gautam tells her that a garage mechanic had come to give car keys to Pragya, he was drunk and got into a fight with him. Sushma tells that some people are such that they can’t tolerate other’s happiness. Gautam tells that he was celebrating the deal with Pragya, who just left. Sushma asks him if Abhi has beaten him a lot. He advises him to file a FIR. Gautam tells that he doesn’t want to file any police complaint against Abhi, who would be rejected by his lover. Sushma knows that Abhi had tried to kill Pragya, he isn’t any helpless soul. Gautam asks Sushma to leave, he will get the aid done and then go for home.

Gautam doesn’t want to spare Abhi. Abhi gets disturbed by Pragya’s words. He meets with an accident. Pragya senses that something wrong has happened with him. Abhi stays conscious, and watches the people gathering around. Pragya feels worried for him. On the other hand, Pallavi stays rigid. Dida understands her love and sorrow. She tells that Pallavi loves Ranbir, as much as she loves her son Vikram. She asks Pallavi to stop Ranbir and Prachi for Vikram’s sake. Pallavi tells that Vikram also hates Prachi.

Dida tells that Vikram loves Ranbir a lot. She wants Vikram to stay safe. She asks Pallavi not to make her anger and hatred bigger than her love for her son. She begs Pallavi for Vikram’s sake. Pallavi tells that she didn’t stop Ranbir from coming home. Dida asks Pallavi to call Ranbir back, Prachi isn’t the reason that Ranbir left the house, it was Pallavi who separated Ranbir from the family.

Moreover, Abhi feels he had damaged the car, just like Pragya damaged his reputation. He takes the car to drop it at the garage. Pragya is hurt thinking of Abhi. She doesn’t leave from the house. She is equally hurt by Abhi’s words.

Abhi tells that Pragya has broken his hopes and heart. Sushma meets Pragya to inform that Gautam refused to file the FIR against Abhi. She explains that she had followed Abhi to the farmhouse, Abhi still regards Pragya as his wife and can’t tolerate her with Gautam.

Pragya tells that she has cleared to him that she isn’t his wife now. Sushma tells that its male ego, he can’t take the rejection. She doesn’t want Pragya’s image to get spoiled. Pragya is stressed out. She tells Sushma that she isn’t able to forget Abhi’s stubborn nature. She feels that Abhi has nothing to lose, he can do anything against her. Tanu feels cursed to marry Abhi. Abhi asks her to leave the house. She doesn’t want to leave. Aaliya informs him that Sushma has got the police along to get him arrested.

Reviewed Rating for Kumkum Bhagya 28th July 2021 Written Update Accident: 2/5 This rating is solely based on the opinion of the writer. You may post your own take on the show in the comment section below.