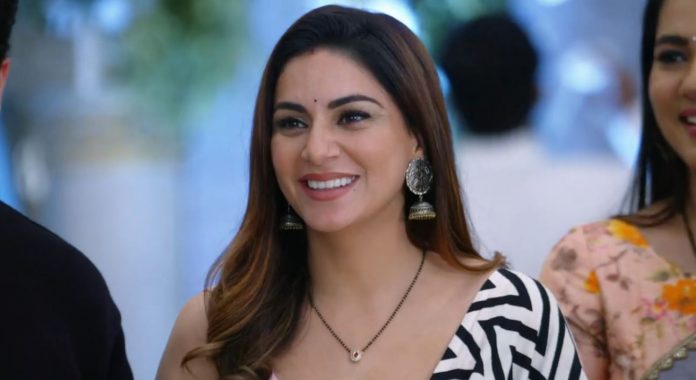 Mahesh tells Preeta that he got the flowers from temple, it will protect her. Preeta gets sad seeing everyone’s wishes. Sameer takes a selfie with the family, before boarding the bus. Preeta thinks to tell the sad news to the family, when they all are together. Preeta stumbles. Karan holds her in time, while Mahesh yells at the driver to drive carefully. Kareena tells Mahesh that Preeta is fine.

Preeta tells that it was her mistake. Kareena asks Preeta not to make such careless mistake again, Mahesh won’t be able to tolerate anything wrong and sink in depression again. Preeta decides to not give the shock to Mahesh. Mahesh tells Preeta that he can’t tolerate any harm to her and the babies, he is sorry to react in anger. She decides to tell them after a few days, else Mahesh can get into depression.

Preeta asks for water. Sherlyn asks her to have lemon water, it will stay hydrated. She feels unlucky to lose her baby. Bani asks her to live happy. She asks Sherlyn to give them good news soon. Rakhi also wants Sherlyn to stay positive. Preeta feels sad that she isn’t able to give them happiness. The family enjoys the trip, while listening to their favorite songs. Sherlyn finds Preeta’s smile vanished. She wants to know why does Preeta have tears in her eyes, when the entire family is happy.

She decides to find out the matter. Sonakshi and her dad makes arrangements for the wedding. She informs her dad that Luthras are coming. Preeta tells Karan that they shall buy sweets for Sonakshi. They shall keep sweetness in the relations. Sonakshi awaits them for dinner. She tells her dad that he fixed her marriage suddenly, her friends aren’t able to come on a short notice, just Karan is coming. He tells her that he liked the guy so much that he couldn’t lose the alliance.

She tells that she will always have time for her dad. He tells that he has nobody in the world except her. She welcomes Luthras. She is grateful that they have come. Sonakshi tells that Karan is lucky to get a wife like Preeta. Karan jokes that he will tell the groom about Sonakshi and make him run away. He apologizes for the joke. Sonakshi’s dad Yashvardhan tells them that he is not a boring dad, he knows to catch up with youngsters. He asks Karan to enjoy. Preeta doesn’t get a chance to tell anything to Karan. What will happen next? Keep reading and leave your comments below.

Reviewed Rating for Kundali Bhagya 29th July 2021 Written Update Preeta’s decision: 2/5 This rating is solely based on the opinion of the writer. You may post your own take on the show in the comment section below.