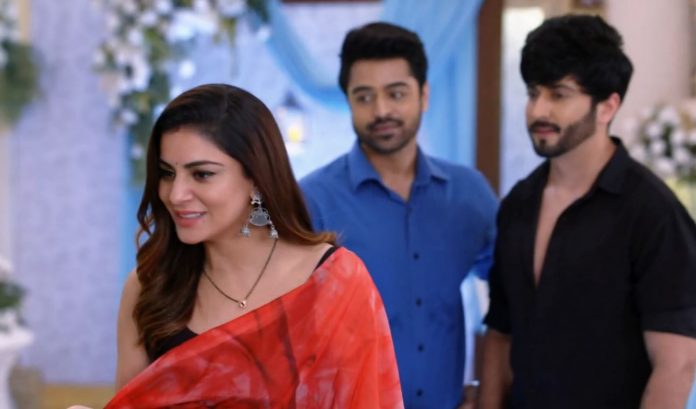 Kundali Bhagya 3rd August 2021 Written Update Twists Preeta tells Sarla that she has a weak womb and also a weak heart, she couldn’t break anyone’s heart, the family is broken after Sherlyn lost her baby. Sarla finds Preeta strong to keep a smile and pretend happy after knowing everything. She wonders how will Karan react. She tells Preeta that science will help her conceive, but it will need time. She asks Preeta not to tell anyone the truth, once Sonakshi’s wedding gets over and the Luthras return home, then she can try to tell them the truth them gradually.

Preeta doesn’t know why is life taking her test. Preeta tells that when Karan knows that there is no baby, when she can never conceive and never give him a happiness, then he can’t handle it. Sarla gives her hope that maybe the fate has some plans for them, they will become parents later. Sarla tells that Preeta will become the best mother. Preeta senses Karan when he comes to the room. She wipes her tears. He still asks her what’s the matter that she is crying.

Sarla asks Preeta if Karan got to know anything. Shrishti is in tension because of Sarla. Janki tells that Sarla will beat them knowing they are going uninvited. Shrishti wants to call Sarla and ask if she spoke to Karan. Sarla gets Shrishti’s call in waiting. Shrishti tells that Sarla is busy on a call. Sarla wishes that Karan shouldn’t know the truth this way that he breaks down. Preeta lies to Karan when he constantly asks him about the sorrowful matter. She tells that Sarla is dealing with a problem.

Preeta tells him that she isn’t crying, but she is indeed happy and lucky to get a loving husband and family. He tells that she is deserving of the happiness, but her tears are troubling him. He tells that he sinks in sorrow seeing her upset. Preeta smiles on his insistence. She wants him to stay happy, even if he is unaware of the truth. She is certain that the family will lose her hopes and get heartbroken on knowing the truth. Rajat and Sonakshi prepare for their Sangeet. Sonakshi gets tired of the dance practice. Karan jokes on her poor dance skills.

Shrishti wants to meet Preeta and Sameer. She rushes to meet Sameer. Preeta and Karan share a moment. Preeta offers help to Sonakshi’s dad in arrangements. Rakhi feels its her duty to take care of Preeta. She loves Preeta a lot. She proves out to be the best Saas. Rajat’s mum also wants to become a wonderful Saas like Rakhi. Rakhi tells that Preeta has lived the relations herself, she accepted Preeta as her daughter before Karan married Preeta. She is glad that Preeta also loves her as much as she loves Sarla. Rakhi tells her about Shrishti, who is lovely but Preeta is unique. She feels lucky to get Preeta in their lives. Keep reading for the coming twists.

Reviewed Rating for Kundali Bhagya 3rd August 2021 Written Update Twists: 3/5 This rating is solely based on the opinion of the writer. You may post your own take on the show in the comment section below.