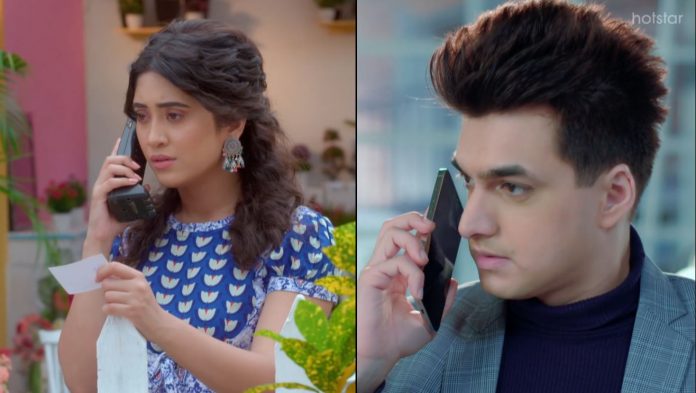 YRKKH New leap story Kartik Sirat amazing remeet Kartik and Sirat get separated when she goes away from him to save his reputation and business. She doesn’t want to drown the Goenkas name by getting Kartik involved in Ranvir’s murder case. Sirat isn’t declared innocent in the case, but still she is seen freely living her life by adapting a new identity. Sirat is just out on bail, but it seems weird that she isn’t going to the court for hearings. She knows that the police is looking for her, and her absence is making things worse for her. She is assumed guilty in the case.

Sirat doesn’t care, and just avoids Kartik by being away from Udaipur. She has no idea that Kartik is also not present in his city, but working in London to get new business for Goenkas. Kartik lives away from the family with a heavy burden of his responsibilities. Sirat and Ranvir’s friendship towards Kartik has proved to be costly for Goenkas. Goenkas have lost their investors, which led to huge losses in the business. They have hopes pinned on Kartik for making their company survive. Kartik doesn’t want Sirat’s name to get dragged in the mess.

He tries to keep her out from the accusations, just like she wishes for him. Kartik works hard to get new business projects, but fails because of his involvement in Sirat’s case. He can’t hear a word against Sirat, even if he has to lose the important project. Sirat starts her new life as Simran, working at an old couple’s flower shop. She earns decent to look after herself. She changes her personality from an angry person to a composed one.

None can imagine that she was a boxing champion before. Sirat and Kartik move on in their unsettled lives, missing each other. Kairav still hopes that they will meet soon. He doesn’t find Kartik wrong, if Kartik went an extra mile to support a friend. Manish blames Sirat for bringing the big losses for their family and business. He feels he has lost his son to Sirat. He misses the old Kartik. Kartik and Sirat’s new looks are amazing, and more amazing is their remeet. Kartik struggles to track her and meet her once to tell her Nani’s last wish.

He wants to stop Sirat from leaving away. Kartik finally gets a hint of Sirat’s location. He reaches the flower shop to see her. Kartik will be taking back Sirat to Goenka house. Will things get forgiven and forgotten after six months or will there be the same drama? Is the show lacking plots that another leap is introduced? Comment your views on Kartik and Sirat’s new love story. Keep reading.

Reviewed Rating for YRKKH New leap story Kartik Sirat amazing remeet: 4/5 This rating is solely based on the opinion of the writer. You may post your own take on the show in the comment section below.