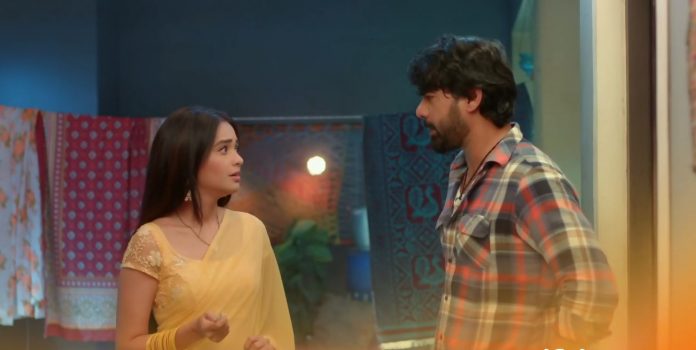 Kumkum Bhagya 5th August 2021 Written Update Prachi hurt Prachi finally gets the love of Ranbir’s family. She is happy that Dida has accepted her heartily. She finds a big change in Rhea’s behavior. She feels Rhea has turned positive, Rhea also deserves Abhi’s love. She doesn’t know why Abhi has ended his ties with Rhea as well. She goes to meet Abhi. She learns about Abhi’s financial troubles. In order to help Abhi, Prachi tries to keep some money there. Abhi assumes some thief is trying to steal the money. He jokingly tells that there is no money that could be stolen.

He catches the thief and pulls by the hand. He is shocked to see Prachi in his house. He realizes that she wasn’t stealing money, but keeping the money to help him. He shows his hatred for her, since she is the reason that he got separated from Pragya. He holds her responsible for breaking her parents’ marriage, by being selfish and marrying Ranbir. He tells her that he doesn’t want her pity or any kind of help. He asks her to keep her money and leave.

He tells that he has started working in a company, he has started earning and would soon get his salary. He asks her to get away from his sight, he doesn’t want to see her again. Prachi feels hurt by his words. He doesn’t tell her that Pragya is alive, or the fact that he has met Pragya, he is working in Pragya’s company now. He doesn’t think Prachi deserves to know anything about her mother. Prachi sadly leaves from his house. She returns home and sheds tears. Ranbir asks her what’s troubling her. She shares about meeting Abhi.

Ranbir asks her not to hurt herself. She wants Abhi to forgive her. She further adds that she will not let Rhea lack any relation, she will talk to Rhea about Abhi. She tells Ranbir that Rhea is her twin sister, she is her responsibility, she wants Rhea to stay happy. She thinks a lot for Rhea. Ranbir understands Prachi and supports her. This isn’t the case with Rhea. Rhea still regards Prachi guilty. She misunderstands Prachi’s intentions. She asks Prachi why is she doing this with her, just like the old times. She cries seeing Prachi snatching her rights in the family, just like she had snatched Abhi and Pragya from her.

Rhea regrets that Prachi is still connected with Kohlis. She wishes Prachi gets away from her life. Prachi wants to prove to Rhea that she just wishes good for her. Will Prachi succeed in turning Rhea positive? Will Abhi and Pragya forget their issues and ever consider that they have two daughters to look after? What will Gautam do with Abhi to get rid of him? Comment your views on Abhi and Pragya’s self-complicated lives. Keep reading.

Pragya regrets that she didn’t believe Abhi and spoke to him well. Manager doesn’t understand why Pragya hates him, and how Abhi scolded the boss in front of the staff. Satish asks Abhi to speak to the boss well, else he may lose the job. Abhi tells that he will not lose the job. Satish asks if Abhi scolded his brother Nihaal who works as the manager in Pragya’s office. Abhi tells Satish that he will change the fate and get his queen. Satish tells that life isn’t a game to mend according to their way.

Abhi tells Satish that he is doing his way. He tells his friends that he will go home and have a good sleep to go to the office with a fresh mood in the morning. He goes home and retires to sleep. He comes across Prachi in the house. He lectures her for coming home to help him. He realizes that she had been adding the money in the saving box for Baljeet and him. He angrily throws the saving box away. He doesn’t accept her help. Prachi tells that she knows that he doesn’t want to see her face, but she has come to tell about Rhea. He asks her not to mention Rhea’s name, because she just wishes bad for Rhea.

Abhi regrets that he wanted to keep Rhea and Prachi with love, but it didn’t happen. He feels he lost Rhea because of Prachi, it will be wrong to accept Prachi now. Prachi feels saddened that she didn’t get Abhi’s love. Abhi wishes that he never met Prachi. Prachi leaves from there. Prachi wishes things get fine, then she won’t need to meet him secretly. Pragya returns home and stays occupied with Abhi’s thoughts. She realizes that he saved her life again. She informs Sushma about Abhi working in the company as her personal assistant, and now she can’t even fire him from the job.

Sushma asks Pragya to use the golden chance and teach a lesson to Abhi to take revenge. Pragya tells that Abhi didn’t humiliate her ever, he never wronged her. Sushma reminds her what Abhi did to her. Pragya wants time to think well. Pragya stays confused about Abhi’s intentions behind saving her. Prachi has an emotional breakdown. Ranbir asks her if Abhi saw her and asked her to never come. Prachi tells him that she is happy that Abhi spoke to her, she wanted to tell about Rhea, that Rhea got married to Siddharth, but Abhi didn’t listen to her. She is glad that Abhi is working now, he will quit his drinking soon.

Aaliya states that Pragya may really think so. He tells that Pragya doesn’t care for anything, she wanted to fire him from the job, but luckily he has a secured job, thanks to the contract. He pities himself that he has to tolerate Pragya, Sushma and Gautam at the office. He reveals about Gautam’s evil intentions about Gautam. He tells that he alerted Pragya, but she said she likes Gautam. Aaliya and Tanu get an idea. Abhi asks them to let him work for Pragya, he has no option to get one lakh. Aaliya asks him to wait for the right time and give a solid reply to Pragya. Abhi tells that he is going out to drink. Aaliya asks him to wish that Pragya gets bankrupt.

Dida keeps a puja at home. The entire family gathers for the aarti. Prachi asks Rhea to give the aarti to Vikram. Pallavi likes Dida’s idea to keep the puja. Dida tells that its actually Prachi’s idea. Ranbir tells about his important meeting. Pallavi feeds him the curd to wish him good luck. She passes a taunt on Prachi. Prachi asks Ranbir not to react. Ranbir wants Pallavi to know that Prachi is dutiful. Ranbir and Siddharth leave for work. Dida realizes that Prachi is the peace-maker, she is deserving of the house responsibilities and keys.

Reviewed Rating for Kumkum Bhagya 5th August 2021 Written Update Prachi hurt: 2/5 This rating is solely based on the opinion of the writer. You may post your own take on the show in the comment section below.