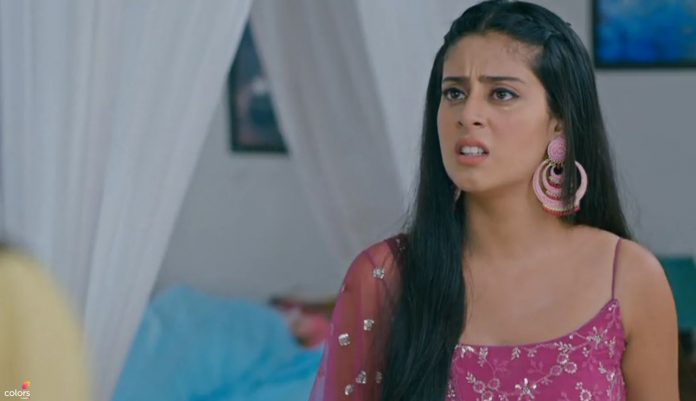 Udaariyaan 25th August 2021 Written Update Jasmin’s fury Fateh gets caught up badly between Jasmin and Tejo this time. Jasmin learns about Fateh and Tejo’s intimacy, which was very unexpected knowing Fateh boasts of his true love for Jasmin. She can’t imagine that he could cheat her, by getting close to Tejo. Fateh and Tejo had spent a night together at the faraway farmhouse, which gives an impression to Tejo that she is pregnant. Though Tejo’s pregnancy is still a dream for her, she stays calm hoping that she will soon receive the good news if Fateh and her relation goes on smoothly like before.

Tejo was hoping that the baby will make their marriage unbreakable. She didn’t know that Fateh will regret over that night and never ever think of her, because of Jasmin’s love. Tejo has no idea that Jasmin and Fateh are still in love, they want to get married, they want to have their future together, becoming selfish to enjoy their lives together, without thinking of Tejo. Tejo is still innocent and ignorant of the whole drama put up by Jasmin.

Jasmin is really grateful that Tejo isn’t pregnant, else it would have been not easy for Fateh to get rid of Tejo and the baby. Jasmin feels fortunate to know the truth behind Tejo’s pregnancy assumption. The false news brings Fateh’s truth out. Jasmin realizes that Fateh and Tejo had come closer while they were away on the night-out. She confronts Fateh about the night, when he had crossed limits with Tejo.

Jasmin thought Fateh is different than other men. She feels she is wrong, even Fateh couldn’t wait for her true love and moved on with his wife. She rebukes Fateh for giving her rights on him to Tejo so easily. Fateh is stunned realizing that his lie is caught. He can’t lose Jasmin. He lies further that he doesn’t have any such relation with Tejo. Jasmin confronts him about Tejo’s pregnancy. Fateh can’t believe it either. She tells him that Tejo has told her about their intimacy, which made her assume she is pregnant. Fateh turns hopeless.

Moreover, Jasmin questions Fateh about his consummation with Tejo. Fateh is speechless. He had been lying to Jasmin and Tejo till now. Jasmin doesn’t want him to lie more. She slaps Fateh in fury when he lies to her once again. She just demands the truth out of him. What will Fateh answer about the night, when he got attracted towards Tejo by forgetting his so-called love for Jasmin, which he called worship before? Comment your views. Keep reading.

Jasmin reminds Fateh the night when he was with Tejo in the farmhouse. She asks him if he remembers everything. She questions him about the broken bed. Fateh tells that it was already broken. She asks him where did he sleep. Fateh lies that Tejo and he slept separately. He remembers the night. He lies to Jasmin, who angrily slaps for having his wedding night celebrated in the farmhouse with his wife.

She asks him not to fool her like he fools Tejo. She tells that he claims to love her, and had consummated with Tejo. She hates Fateh for the biggest cheat. It gets unimaginable for him. She tells him that Tejo had confidently gone for the pregnancy test. He can’t believe it. She tells that it was just a false alarm, she isn’t pregnant, he shouldn’t get happy about it. She adds that Tejo wanted to tell him about it, but he left before that. She asks Fateh if he loves Tejo. She confronts him.

Fateh tells her that he never looked at Tejo after that one night. He still expects Jasmin to forgive him. Tejo suspects that Jasmin is dating Amrik. She asks Amrik to tell her if there is anything between Jasmin and him. She tells that she will keep his secret. Fateh confesses love to Jasmin. Jasmin rebukes him for his lies. Amrik swears to Tejo that Jasmin is just a good friend, he isn’t dating Jasmin. He tells Tejo that he wants to ask her the same, if Jasmin forget Fateh and wants to moved on in her life.

Tejo tells that Jasmin and Fateh have move on. Amrik tells that Jasmin was with Fateh outside the village area that day when Nimmo caught them together. Tejo doesn’t think Jasmin and Fateh are still in their madness of love. Amrik hopes she is saying right. Jasmin grows mad at Fateh. Fateh asks Jasmin not to assassinate his character based on that one night. He tells her that he can’t think of anyone except Jasmin. Jasmin questions his commitment. She asks him to tell Tejo about them. He pleads her to give him some time. She doesn’t want him to lie further. She gives him an ultimatum of three days to tell the truth to Tejo.

Fateh returns home only to find Tejo in tears. He apologizes to her for not listening to her and going away when she needed him emotionally. Tejo tells him that she felt she is pregnant, but her happiness was short-lived. She shares her pain. She tells him that her hopes fell flat and also her dreams. Fateh consoles her. He tells her that they still have much time to plan a baby. She tells him that they shall try for a baby. She questions him about his love for her. She asks him why didn’t he love her after that one night, why did he get distanced. Fateh tells her that he has work stress.

She wishes that his reason is true. She isn’t able to understand his behavior. He has no answer for her. She tells him that their relation is of friendship and faith. Fateh tells her that he will fix all the problems in their lives. He asks her for some time. Tejo feels guilty to hide about Simran from Fateh. Fateh and Gurpreet miss Simran in the family.

He takes Gurpreet’s advice about his friend who isn’t happy in his marriage and wants a divorce. Gurpreet tells that marriage is a sacred relation, no person should think of breaking it. She asks Fateh to never think of any such a thing in his marriage. Fateh assures that things are fine between Tejo and him. He wants to tell Tejo about his love for Jasmin as soon as possible.

Reviewed Rating for Udaariyaan 25th August 2021 Written Update Jasmin’s fury: 3/5 This rating is solely based on the opinion of the writer. You may post your own take on the show in the comment section below.