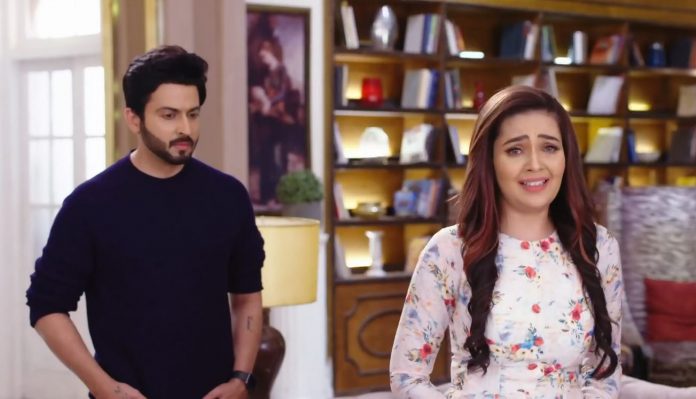 Kundali Bhagya 1st September 2021 Written Update Sona returns Karan and Preeta garner the family’s trust once again by a lot of difficulty. Rakhi and Mahesh surprise Karan by supporting Preeta, when the elders Bani and Kareena were against Preeta. Bani wanted Karan to oust Preeta from the house. Bani didn’t wish to see Preeta after her lie, but Rakhi supports Preeta like she does always. Rakhi proves to the best mother-in-law, and also a mother to Preeta. She loves Preeta as much as she loves Karan.

This time, Rakhi proves her love by supporting Preeta when the entire family thinks otherwise. Sherlyn feels miserable to fail once again to Preeta’s goodness. Things come back to a stable state in the Luthra house, after the family accepts Preeta’s truth. Rakhi tells them that they shall wait for the reports and not hurry up in concluding anything negative. Karan also warns Sherlyn against hurting Preeta by her harsh comments. He is hopeful to get positive results in the coming reports. The peace in the family breaks once again with Sonakshi’s entry.

The Luthras are left stunned. Sonakshi cries and makes an apology to Preeta. She tells that she doesn’t want Karan and Preeta’s marriage to face any problem. Karan melts his anger seeing Sonakshi’s tears, and even Preeta gets supporting Sonakshi again. Will Sonakshi bring any storm in their lives or leave forever? Is Sonakshi going to become Preeta’s surrogate in the coming track? What do you think about the upcoming pregnancy track? Comment your views. Keep reading.

Rakhi understands Sherlyn’s concern, but reprimands her for the wrong statement that Preeta can never conceive. She asks Sherlyn to show some humanity and never speak wrong against any woman. She lectures Sherlyn for hurting Preeta’s sentiments by the bad blames. She tells that she should have supported Preeta. She feels Sherlyn’s thinking is really bad. She tells that science can help any woman conceive in today’s times, but Sherlyn had just accused Preeta to break her down with a motive. She asks Sherlyn her motive.

She tells that Sherlyn has hurt her heart by manipulating the matter and proving Preeta wrong in front of them. She asks Sherlyn to never repeat her mistake. She tells that Preeta needs their love. She tells Preeta that she is always with her, very soon Karan and Preeta will become parents. Mahesh also pacifies Preeta. She apologizes to him. Karan consoles Preeta and hugs her. Shrishti gets inside the house and runs to hug Preeta. Sherlyn plays her victim card in front of Kareena.

She tells that Preeta did wrong, but Rakhi reprimanded her as if she is wrong. She adds that she just wanted to bring the truth out, she didn’t want them to get cheated. She feels she did the right thing to expose Preeta’s lies. She tells that she is feeling insulted that she is always regarded wrong. Bani tells that Sherlyn is right and Preeta is wrong. Kritika overhears them. Bani doesn’t want to forgive Preeta. Kareena also supports Sherlyn. She tells that Rakhi always supports Preeta by believing her, she had also developed a soft corner for Preeta but she will never believe her.

Sherlyn tells Kareena that Preeta was cheating them. Kritika gets angered that Sherlyn is instigating the family against Preeta. Kareena tells that she knows Sherlyn is right. She asks Sherlyn to calm down. Bani feels Preeta showed them dreams and broke the dreams so badly. Sherlyn apologizes to revive their wounds. Kareena tells that Preeta has broken their hearts. Sherlyn is glad that Bani also got against Preeta. Kritika takes Sherlyn with her. Shrishti asks Preeta not to get upset. Preeta tells her that she still feels she should have told the truth to the family.

Karan tells that everything went well, Rakhi reacted as they expected. Shrishti asks Preeta not to worry, Karan is with her. He tells that Rakhi always surprises him by her love for Preeta. He feels Rakhi loves Preeta a lot, there is no Saas-bahu drama in his family. Kritika gets Sherlyn to her room. Sherlyn asks her not to misbehave. Kritika warns her. She tells that she has seen all of her drama, how she was instigating the elders against Preeta.

She asks Kritika to leave Luthra house and go to her husband’s house. She advises Kritika not to look into her Maayka’s issues. Kritika gets upset. Sherlyn doesn’t want Kritika’s interference in her house. Sarla worries for Shrishti, who went to meet Preeta. She knows that Shrishti loves Preeta a lot, and would be equally hurt knowing Preeta’s sorrow. Shrishti returns home with the good news that Rakhi has supported Preeta against Sherlyn’s accusations.

She feels Rakhi loves Preeta as a mother, Preeta has blessings and love of two mothers. Sarla tells that Rakhi is really sweet and loving, Preeta is indeed lucky. She promises to love Shrishti a lot. Prithvi finds Kritika in his room. He doesn’t want Sherlyn to see them together. He finds her crying. He asks her the reason for her tears. He thinks she is crying for Karan and Preeta’s sorrow. She tells that Sherlyn blamed Preeta, she had been unfair. He tells that Sherlyn always troubles Preeta.

He wonders why isn’t Preeta leaving Karan, knowing he had impregnated Sonakshi. Kritika asks Prithvi when will he take her to his house. She feels her respect isn’t the same now, since she is living in her Maayka. Sarla calls up Rakhi to thank her. She tells Rakhi that Preeta would have told the entire truth now, its good that Rakhi stood by Preeta. She requests Rakhi not to get upset with Preeta. Rakhi tells that Sarla has a big heart to ask her daughter to stay silent and suppress the sorrow. She knows Preeta’s sorrow and also her courage to keep up other’s happiness.

She is thankful that Sarla thought a lot for her family. She tells that she is a woman and can understand Preeta’s problem, its not Preeta’s mistake to face complications. She predicts that Preeta will soon get a child. Sarla praises Rakhi for understanding Preeta well. Rakhi assures that she will never blame Preeta for anything, she will always support Preeta. Sarla is relieved talking to Rakhi. Mahesh finds Rakhi in tears. He consoles Rakhi, who lost her hopes once again. Rakhi tells him that it hurts when a dream breaks. Sonakshi makes an entry in the Luthra house to meet Preeta. Stay tuned to know what happens next.

Reviewed Rating for Kundali Bhagya 1st September 2021 Written Update Sona returns: 4/5 This rating is solely based on the opinion of the writer. You may post your own take on the show in the comment section below.