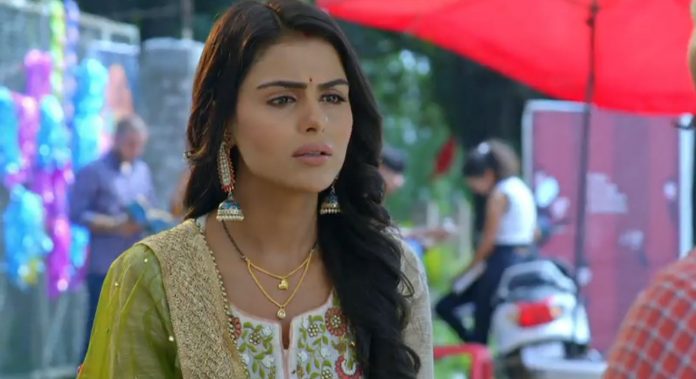 Udaariyaan 1st September 2021 Written Update Tejo’s sacrifice Tejo goes back home to check the visa papers, but Fateh comes at the same time to stop her and distract her from seeing the papers. Tejo misses to see the visa application date. Fateh will get saved from Tejo, but not from her suspicion which rises more with his strange behavior. Tejo wants Fateh to talk to her, discuss the matter bothering him and speak out to sort their differences. Fateh doesn’t discuss with Tejo, as a punishment served to her to reply her cheat. Fateh has decided to cheat her and keep her in darkness until he flees with Jasmin to Canada.

In the upcoming track, Tejo will come to know about Jasmin and Fateh through his friend’s engagement party, where she spots them introducing themselves as lovers. Tejo will be shocked to know that Fateh has chosen Jasmin over her, Fateh still loves Jasmin and wants to have a life with her in Canada. Fateh didn’t tell her anything, but she will come to know the entire truth. Tejo will also learn Fateh and Jasmin’s Canada plans.

She confronts Fateh and Jasmin. She asks Jasmin to come into Fateh’s house and life if she wants to take her place. Tejo happily makes a sacrifice for Jasmin’s sake. She leaves from Fateh’s life. She tells that Jasmin wanted to win Fateh, and even Fateh wants to live with Jasmin. She wishes them all the best to fulfill their dreams.

She tells that there is no place for her in Fateh’s house now. She asks Jasmin to keep her old love and start a new life. She gets Jasmin into the house and makes a leave from there. Tejo makes a huge sacrifice for the two most special people of her life. Will Fateh understand Tejo’s sacrifice and value her? Is the end of Fateh and Tejo’s marriage? Keep reading for further updates.

Upcoming: Tejo meets her colleague in the college, who informs her about her sister’s marriage happening with a NRI guy. She asks Tejo to grace the ceremony. Tejo gives her good wishes for Nikki. She gets Nikki’s engagement ceremony invite. Tejo agrees to attend the ceremony. Fateh and Jasmin get dressed according to the retro theme. Jasmin is so excited to meet Fateh’s friends, introducing herself as his life partner. Jasmin and Fateh hold hands and arrive at the venue, unaware that Tejo has also arrived there.

Tejo checks the visa forms. She doesn’t find the forms in the envelope. Fateh takes the forms and hands over to Jasmin. He tells her that now that she has the visa papers, she need not worry. Mahi offers help to Tejo. Tejo tells that she was finding some papers. Tejo tells that everything is okay. Mahi enquires about Tejo and Fateh’s fight. Tejo tells that they didn’t fight, there is not any tension. She asks Mahi to go for her classes. She decides to go to the academy and ask Fateh about the visa papers.

Jasmin is very happy that they didn’t get caught by Tejo. She tells Fateh that she is very excited about the engagement party. She asks Fateh to take her for shopping. Fateh hugs her happily. Mahi asks Tejo if she had a patchup with Fateh. Tejo tells that she went to academy, but he wasn’t there. Mahi tells that Fateh has come home. Fateh vents anger thinking about Tejo and Buzo’s relation.

Tejo meets Fateh to confront him. She asks Fateh why didn’t he answer her calls. Fateh asks her what does she have to say. She tells him that she got Jasmin and his visa forms in an envelope, and then she found the envelope missing, she didn’t get the forms when she checked for it again. Fateh worriedly asks her not to check his personal things. She asks him about the forms, the truth behind the visa applications. Fateh can’t tell her the truth. He tells her that he had applied for the visa.

Tejo asks him if the forms are old. Fateh gets an idea to lie to her that the forms are really old, he had torn it and threw it away. Tejo’s heart comes to a calmstill. He asks Tejo if she was doubting him again. He asks her not to think of his affair again by connecting him with Jasmin. He acts too innocent and tells that he doesn’t want to come home to argue with her. She feels sorry to doubt him.

Tejo sinks in sorrow and thinks that they were too happy together before, unlike now. She misses Fateh, while he is away enjoying his time with Jasmin. Jasmin tells him that she is on the cloud nine. Tejo is lost in thoughts. She meets her good friend in the college. She tells that she missed her a lot. Deepti informs that her maternity leave is ending, she is going to join back. She asks Tejo about her married life. Deepti tries to make Tejo’s mood better. She invites Tejo in Nikki’s engagement.

Fateh tells Jasmin that they have 15 days to get the visa. Jasmin tells that they will plan and run away to take the flight. Fateh feels like living when he is with Jasmin. They get into a never before romantic moment. Tejo awaits him at home. Tejo selects a special suit for the party. Fateh tells Jasmin that she will look the best in any dress. He spends time with Jasmin.

Fateh returns home only to find Tejo talking to Buzo. He misunderstands her. When she asks him to accompany her in her friend’s party, he reasons that he is going in his friend’s party. Fateh asks her to take Buzo along, and leaves after the taunt. Khushbeer asks Tejo not to get disheartened and attend the party alone, if Fateh can’t accompany her. Tejo agrees to attend the engagement party. Stay tuned for the next twist.

Reviewed Rating for Udaariyaan 1st September 2021 Written Update Tejo’s sacrifice: 1/5 This rating is solely based on the opinion of the writer. You may post your own take on the show in the comment section below.