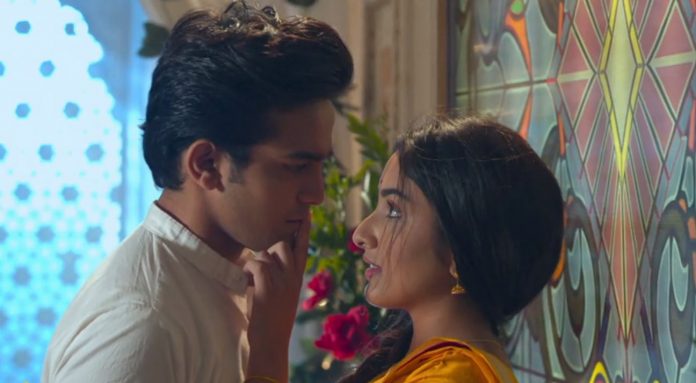 Barrister Babu 2nd September 2021 Written Update First kiss Bondita gets into a humorous conversation with Kali and other ladies during Laboni’s function. Kali starts telling the young unmarried girls about the wedding’s first night, leaving them embarrassed. She targets Bondita and asks her if she knows anything about the first night. Bondita tells Kali what all she has seen in movies till now. Kali realizes that Bondita doesn’t know anything further and teases her. Bondita gets curious to know about the first night.

Anirudh overhears their conversation, feeling awkward and at the same time, experiencing a storm of emotions of love to express to Bondita. Anirudh doesn’t leave and hears the ladies’ naughty talks. Kali tells Bondita about the romance and intimacy between a husband and wife, that starts with a kiss. Bondita tells Kali that she has heard about the kiss, but never got to know. Kali teasingly tells her how a kiss would feel if given by love. Bondita sees Anirudh around, and feels the same awkwardness and excitement.

Anirudh and Bondita get close to share a moment. Anirudh tells her that he can explain her what a kiss means. He asks her if she is ready for their first kiss. He tells her that he is going to become her husband in a day, he will be marrying her as he promised, so its fine if they share a kiss. Bondita refuses to him. She asks him to respect her wish, a woman’s consent matters a lot in such a situation. Hearing this, Anirudh feels so proud of her, that she still knows to keep her stand and stay firm. He wanted to hear the same reply from her.

He respects her refusal. He tells her that every man should respect his wife’s consent before touching her. Bondita gets glad when he promises to never get close to her against her wish. She expected the same from Anirudh. He tells her that he will never claim his rights on her, but he will have a right to love her deeply. Bondita melts down by his words. She tells him that she is ready to share a kiss, since he has a right on her and also her soul. Bondita and Anirudh share a hug instead, and handle their growing emotions.

Later, Anirudh surprises Bondita by showing a beautiful saree and handmade ornaments he managed to afford by his labour wage. Bondita gets joyed up seeing his hard earned gifts. She treasures the saree. She tells him that his gifts are the most precious ones for her. Anirudh tells that he would like to see his bride decked up on their marriage day. Anirudh and Bondita spend the time dancing and romancing, getting close to share the first kiss. They get unaware of the people watching. The guests in Kali’s house start shaming Anirudh and Bondita for having a wrong relationship. Anirudh and Bondita name their relation of love.

They confess that they love each other and want to get married, against their families’ wish. The people don’t come ahead to support them. They don’t even understand such love, that made them go against the family. Anirudh takes a stand for Bondita when she gets humiliated. Kali comes to their rescue, since she believes in love and worships love. She declares that she will get Anirudh and Bondita married, bringing a wide smile on their faces. On the contrary, Trilochan failed to learn Anirudh’s whereabouts from Sampoorna.

He plans to shock Sampoorna in a way that she breaks down and agrees to give him the address. Trilochan plans a marriage in the house, and tells her that she will be glad to see the couple. Trilochan wants Sampoorna to tell him about Anirudh, so that he can stop Anirudh and Bondita’s marriage. He madly goes to the extent of getting Binoy sit in the mandap to shock Sampoorna. Will Sampoorna shatter with Trilochan’s evil move and tell him Anirudh’s address? Will Chandrachur get to see Anirudh and Bondita in Kali’s house, since he arrived there to attend Laboni’s marriage? Keep reading.

Reviewed Rating for Barrister Babu 2nd September 2021 Written Update First kiss: 5/5 This rating is solely based on the opinion of the writer. You may post your own take on the show in the comment section below.