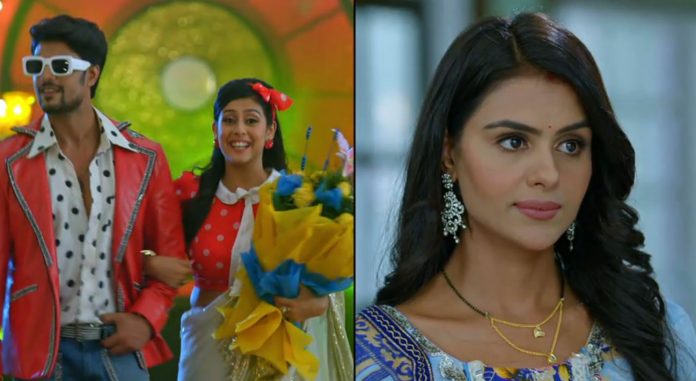 Udaariyaan 2nd September 2021 Written Update Shocker for Tejo Tejo informs Buzo about the party. She tells that she wants to take Fateh in the party. Buzo wishes that nothing goes wrong in their marriage. Tejo thanks him for the sweet wishes. She feels Buzo understands her well. Fateh arrives home and overhears her conversation with Buzo. He gets jealous seeing her laugh and talk on the call. Tejo tells Fateh that she has a good plan to cheer him up. She shows him the suit. Fateh doesn’t want to trust her. He gets confirmed that she has an affair with Buzo. She asks him to accompany her to the party.

Tejo and Fateh are going to attend the same party, because of Fateh’s negligence, when he didn’t pay attention to her words. Tejo was going to tell him the venue, but he preferred to ignore the talks. Fateh gets mistaken that Tejo will be going in her friend’s party with Buzo. He doesn’t care if she goes with anyone. He stops thinking about Tejo, and rushes to meet his love Jasmin. He picks up Jasmin on the way, and the couple heads to the venue.

Tejo gets decked up for the party in her retro look, wearing a blue saree. She has no idea that she will be coming across Fateh and his so called-girlfriend Jasmin in the party. What will happen when the truth comes out in front of Tejo? How will Fateh cover up the truth this time? Will he learn about Simran and Buzo, and regret for doubting his angelic wife Tejo? Keep reading for further upcoming updates.

Fateh and Jasmin arrive in the lavish party. Jasmin plans to throw a grand party at her reception. Fateh introduces Jasmin as his wife to her friends. Jasmin and Fateh proceed to attend the engagement. Tejo forgets the invitation card at home. She doesn’t get an entry in the party. She calls up Deepti, who reaches the gate to welcome her. Satinder tells Nikki about his friend Fateh. Tejo likes the arrangements. Jasmin tells that they will be becoming NRI in some days, they are going to Canada.

She praises Fateh as her rockstar to always leave an impression on others. Tejo goes to meet Nikki. Fateh gets saved once again, when a drink gets spilled on Jasmin’s saree and they go away before Tejo meets Satinder and Nikki. Tejo finds everyone with their partners. She feels odd and misses Fateh. She thinks to call Fateh and ask him if he is missing her too. Fateh corners Jasmin and romances her. Fateh tells her that there is no one around to disturb them. He proposes her romantically.

Fateh tells Jasmin that they shall have a new start to their new journey. Jasmin accepts his marriage proposal. He kisses her hand. Fateh makes her wear the ring. Fateh and Jasmin share a romantic dance. Fateh stays in Tejo’s thoughts until she sees him in the party. She wants to go to him. He takes the drink for Jasmin. Tejo wonders if she had really seen Fateh or imagined him. She thinks if Fateh saw the invite and came to the party to invite her. Jasmin refuses to have the wine, but Fateh insists her to drink. Tejo wants to know if Fateh is really there, why didn’t he call her if he had come. Jasmin feels lucky to get Fateh.

Satti cleans Jasmin’s room. She is shocked to get Jasmin’s burnt passport. She suspects Jasmin and calls her up to get answers. Jasmin doesn’t answer Satti. Tejo thinks Fateh isn’t hearing the phone ring in the noise. Fateh takes Jasmin for a dance. Satti shows the burnt passport to Rupy. She wants to know why did Jasmin lie to Gippy at the time when he asked for her passport. Rupy goes to further check his passport. Satti asks him what is he finding. Rupy finds his passport missing. He asks Satti why did Jasmin get his passport. Satti wants to know how did it burn. Rupy realizes that Jasmin is going to plan something big. Fateh and Tejo have a hit and miss in the party. Stay tuned.

Reviewed Rating for Udaariyaan 2nd September 2021 Written Update Shocker for Tejo: 5/5 Only for the deserved revelation in front of Tejo This rating is solely based on the opinion of the writer. You may post your own take on the show in the comment section below.