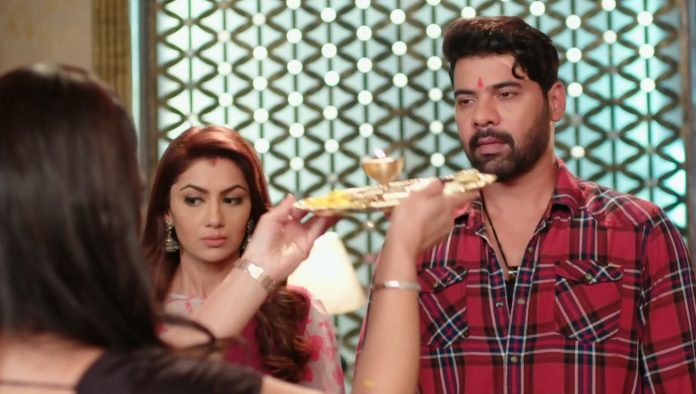 Kumkum Bhagya 1st September 2021 Written Update Mad twist Abhi and Pragya get married by the new contract, while Abhi repents that his own wife has bought him. He tells Pragya that she has done good to pay his price to Tanu. He feels both Tanu and Pragya are same, one tagged his price and other paid the price. He is sorry for himself that he believed Pragya’s love and fell for her once again. He makes up his mind that he will never fall for Pragya ever, he will never get blind in her love. He wants to keep his eyes open and know what’s happening around, who is targeting him and who wishes bad for him.

He doesn’t know that Pragya has married him just to look after him. Pragya was okay to fight with Gaurav’s accusations all by herself, without accepting Tanu’s deal. She accepted the deal just to save Abhi’s life, since she thinks Abhi will die by not quitting drinking. Sushma just wants Abhi to save Pragya from Gaurav’s legal mess. She hates Abhi, since she thinks he had tried to murder Pragya. She tolerates him just to save Pragya’s reputation in the business circle.

Aaliya and Tanu make a leave with the money, while Sushma welcomes Abhi with the aarti plate. She plans a proper home welcoming for Pragya and Abhi, the newly weds. Abhi orders Sushma to make him enter the house with all the rituals, because he values the contract marriage as well. Abhi tells Pragya that he can’t step into the Kumkum plate, but he can at least hold her hand when he enters the house. Sushma performs their aarti.

Abhi tells that he is her Ghar Jamai from now. He holds Pragya’s hand and steps inside Sushma’s house. He tells that he will make sure that he does everything with Pragya’s support. He turns rude towards Pragya and shocks her. On the other side, Rhea plans to prove Prachi clumsy by making her fall once again. She wants Prachi to not perform the puja with Ranbir. She wants Ranbir back in her life. Rhea tries the same trick of making the floor oily to make Prachi fall. She finds Ranbir busy on a call and spills the oil near the staircase.

Pallavi and Dida happen to come downstairs instead Prachi. Pallavi falls down, while Dida watches tensedly. Rhea is shocked that her plan failed. Will Prachi get blamed for Pallavi’s fall as well? Ranbir and Prachi get decked up as Krishna and Radha for the Janmashtami function. They look their best, while Rhea grows insecure seeing their romance. Abhi gets mad to plan revenge on Pragya. Will Pragya neutralize Abhi’s mad rage, and sort their differences? Will Prachi realize Rhea’s evil? Comment your views and keep reading.

Tanu is thankful to Pragya on getting the money. Abhi asks her if its her price. Tanu tells that its not the rent amount for six months, he is precious for her. Abhi tells Aaliya that he signed the contract and can’t come home with her. Tanu asks Abhi to take the heavy bags outside and help her. Abhi refuses. Tanu and Aaliya try to talk to him to fill more revenge motives in his mind. Tanu tells that she knows that Abhi loves Pragya, but she trusts him. She asks him to remember what all Pragya did with him and his family.

He doesn’t think he will fall for Pragya. Aaliya tells that he will fall weak in front of his love, if that happens then they will lose the battle. Abhi assures that he won’t believe Pragya again. He calls Sushma his new Sasumaa after Sarla and Sarita. He asks Sushma to welcome her Jamai. Pragya gets hurt by his behavior. Abhi tells Sushma that he will stand at the door. He asks Sushma how did she meet Pragya.

Sushma doesn’t want to answer him. He wants his answers, if Pragya has changed two years back or she was such negative since ever. He wants to know if he got cheated from her Kumkum since ever. Pragya gets emotional seeing the Kumkum. Ranbir and Prachi find Rhea tensed. Rhea tells that she is angry on herself, that Prachi was falling down because of her. Prachi calms her down. She adds that she is okay. Rhea tells that she can’t forgive herself if anything happens to Prachi.

Pragya informs her that she got Abhi home. Prachi is much relieved to know this. Pragya assures that she will stop Abhi’s drinking. Prachi tells that she has to meet the doctor and collect Abhi’s medical reports. She is thankful to Pragya for keeping her wish. Pragya tells that she did this just for Prachi. Prachi loves Pragya more for fixing the wrong in their lives. Abhi calls Pragya for the rituals. Prachi prays that they always stay united. Abhi wants to know the past reason for Pragya’s change. He casts his bad sight on Sushma’s house, thinking Sushma has changed Pragya. He wants his answers, to know if Pragya has returned to ruin him or not. Stay tuned for next update.

Reviewed Rating for Kumkum Bhagya 1st September 2021 Written Update Mad twist: 2/5 This rating is solely based on the opinion of the writer. You may post your own take on the show in the comment section below.