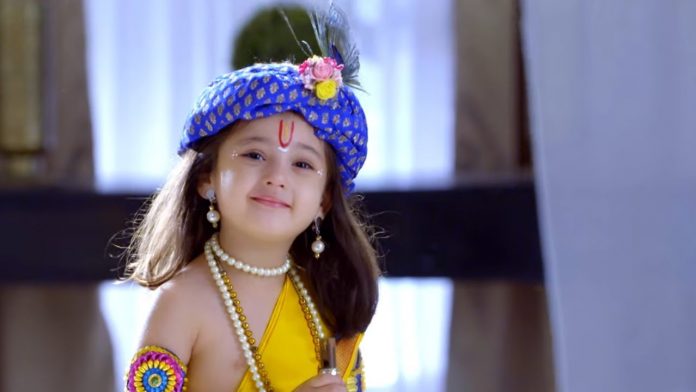 Kundali Bhagya 3rd September 2021 Written Update New entry Preeta is much worried that Mahesh isn’t able to accept the truth. Karan asks Preeta not to stress herself. He takes her to Rakhi, thinking Rakhi will pacify Preeta. Karan and Preeta find the elders talking. They overhear their conversation. Rakhi has handled herself maturely, and also supports Preeta. Preeta wants the family to regain the lost happiness. Rakhi feels that a Kanha will be coming home to bring happiness in their lives on Krishna Janmashtami. She tells Bani and Kareena that very soon, they shall meet their Kanha, they shall receive a good news. Preeta gets hopeful as well on hearing Rakhi.

Rakhi tells that Krishna may send a naughty Kanha to them. Preeta emotionally prays that she also gets blessed with a baby boy. Someone walks into the Luthra mansion, dressed in Kanha’s avatar. Preeta’s prayers get answered. The girl dressed as Kanha brings much happiness in Karan and Preeta’s lives. Preeta asks the girl who is she and how did she come to Luthra house. Karan and Preeta get engaged talking to the little girl. Preeta feels the girl is sent by Krishna, the happiness has finally arrived as Kanha, their dreams will be fulfilled.

The entire Luthra family get happy seeing the cute girl. They learn that the girl doesn’t have her parents. Kareena suggests that Karan and Preeta adopt the girl. Preeta happily accepts the suggestion. She tells Karan that she wants to find out the girl’s guardians and speak to them about adoption. Who is the girl? Is it Sonakshi’s daughter? Did Sonakshi lie about her newborn’s death? Comment your views and keep reading for full updates of your favorite show.

Rakhi tells Bani that Mahesh is still in the room. Kareena asks her what is she hiding. Rakhi tells that Mahesh took the anti-depressant tablets at night, he is behaving like before. She is scared that he will slip into the earlier stage. Karan consoles her. Rakhi tells that she feels Krishna will send a naughty Kanha home for them, Preeta’s reports will come and also get a good news for them. Shrishti gets Sameer’s call. She tells him that she always calls him, but he has called her himself. She asks what’s so importance.

She finds him in tension. He tells her that Sonakshi had come home. She asks why did Sonakshi come back. He tells that she is going to London, she came to say a final bye. Shrishti tells that Sonakshi can’t be trusted. She requests him to keep her updated about the happenings in the house. He asks her not to worry. She thanks him. She prays for Karan and Preeta’s jodi, that they stay away from every bad sight. Prithvi and Sherlyn also cast a bad sight on Karan and Preeta’s jodi.

This time, they get into an argument. Prithvi asks Sherlyn why did she make Kritika cry. Sherlyn wants him to explain Kritika not to mess up with her. He tells that she should use her mind before telling anything to her. He adds that Kritika was asking him to take her room, if they leave the Luthra house, then he can’t meet Sherlyn and help her. He doesn’t want to get away from Sherlyn. She agrees to keep silence.

Kareena asks Bani to have food and not be depressed. Karan tells them that Preeta’s reports have come, he needs to talk to Dr. Anchal. Karan, Preeta and entire family speak to Dr. Anchal and try to know about the reports, if things are fine and if Preeta can conceive. Karan asks Anchal to please tell them. Anchal tells that she doesn’t want to give them any false hope. She tells him that she thought Preeta’s complications can get solved, but seeing the reports, she can’t say that Preeta can conceive a child. She tells that Preeta’s case isn’t impossible, but it will be difficult for Preeta to conceive.

The family cries along with Preeta. Sherlyn is the only one smiling. Karan gets disheartened. He goes to console Preeta. Rakhi also gets inconsolable. She doesn’t know what will she tell Mahesh. Kareena tells them that she has a solution. She wants to talk to Karan and Preeta. Karan consoles Preeta, who tells him that she wants a child. She wants to fulfill her dreams. Kareena tells them that the treatment may fail and break their dreams once again, but they can have a child through adoption. She asks them not to wait for happiness, and instead get happiness home directly. The family likes Kareena’s idea.

Kareena tells that the final decision would be of Karan and Preeta. Kareena tells that they aren’t old fashioned to think that child should be their blood, child can’t be judge, child accepts anyone as a mother and gives happiness. She tells that everybody wants Karan and Preeta’s child in the family. She asks them to fulfill their dream. She tells Karan that Preeta’s happiness will return if they adopt a child. She exclaims that many orphan kids wait for their adoption, they want a family and parents who look after them. She tells that Mahesh will be happy seeing the baby, he will love the baby a lot.

Rakhi and Bani agree with Kareena. Kareena tells that Karan and Preeta will become parents. She suggests that she can fix their meeting with her friend, who runs an orphanage. Rakhi asks Karan and Preeta to think well, if they adopt the child, then their happiness will return.

She wants Preeta to get her lost smile back. Bani asks Karan and Preeta their decision. Karan and Preeta agree for adoption. Their decision makes the family happy. Sherlyn gets worried. She wants to stop the adoption by taking Prithvi’s help. She looks for Prithvi. Prithvi is spending time with Kritika. She thanks him for encouraging her. She doesn’t think Sherlyn has a right to taunt her. She sets her own boundaries. Sherlyn calls him and leaves him worried. Sherlyn wants to plan and get the adoption plan cancelled. What will Sherlyn do now? Comment your views and keep reading.

Reviewed Rating for Kundali Bhagya 3rd September 2021 Written Update New entry: 5/5 This rating is solely based on the opinion of the writer. You may post your own take on the show in the comment section below.