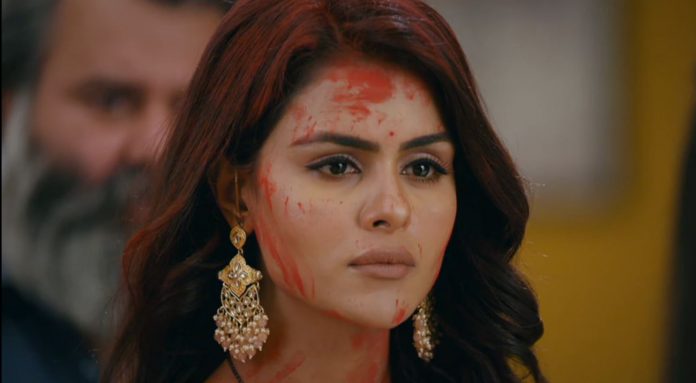 Udaariyaan 8th September 2021 Written Update Tejo’s bold move Tejo exposes Jasmin’s truth in front of both the families. Tejo first reveals Jasmin’s truth to her parents, who knew that Jasmin is up to something. Tejo tells Jasmin that she has decided that Jasmin will be going to the place where she wants to go. She asks Jasmin to take over Fateh’s house and family as she aims to win them. She decides to leave Fateh forever, since he doesn’t deserve her. Rupy and Satti develop hatred for Jasmin knowing about her shocking affair with Fateh, who is now Tejo’s husband.

Tejo decides to break her marriage for her sister’s sake. She takes Jasmin with her to Virk house. Tejo pushes Jasmin angrily, much to the family’s shock. Virk family was worried for Tejo. They ask Tejo if she is okay. They see her state with the sindoor over her face and clothes. Worried seeing her scolding Jasmin, they ask the matter. Gurpreet asks Tejo why did she get Jasmin home. Tejo asks Jasmin to get up and tell everyone the truth, that Fateh isn’t just Tejo’s husband, but also Jasmin’s boyfriend.

This truth from Tejo gets revealed and shocks the entire family. They ask Jasmin if this is true. Khushbeer asks Tejo if this is the truth. Tejo tells him that she had seen the truth herself, she had seen Fateh and Jasmin in the party, where they were meeting everybody, introducing themselves as husband and wife.

Khushbeer finds Fateh coming home. He asks Fateh what did he do. Khushbeer realizes why Tejo was upset when she returned home from the party. He angrily slaps Fateh. Fateh and Jasmin get reprimanded by both the families for the biggest cheat not imagined by anyone. Fateh gets answerable. Will Jasmin take an advantage of the situation and accuse Tejo for her affair with Buzo to get saved from the family’s wrath? What will Jasmin do to save herself? Keep reading.

Gurpreet worries for Tejo and prays that Tejo is safe. Nimmo accuses Tejo for always being so inconsiderate towards the family. Khushbeer defends Tejo and thinks there is some reason behind her leaving. Tejo tells the family that she was waiting for Jasmin to come home. The family questions Tejo to tell them the matter. Tejo tells Jasmin that this isn’t her house, Jasmin should go to her house, where she belongs.

Rupy asks Tejo what does she mean to say. Tejo tells that its their misunderstanding, that they never knew Jasmin’s truth. Satti apologizes to Tejo on Jasmin’s behalf. Tejo tells that Jasmin’s mistake can’t be forgiven. She tells that she had forgiven Jasmin till now, but she has grown up now. She wants to punish Jasmin for her mistake. The family enquires the matter repeatedly. Tejo tells that Jasmin will go where she wants to go. She asks the family not to stop her from doing her wishful. Tejo doesn’t let Jasmin go anywhere. She drags Jasmin to Virk house. Fateh’s family celebrates the house coming of Ganpati.

Jasmin asks Tejo what does she want to do. Tejo doesn’t answer her. Khushbeer and Gurpreet pray that Tejo returns home. Jasmin worries for her life when Tejo angrily speeds the car. Jasmin asks Tejo to slow down the car, else they can meet an accident. Tejo scares her further. Tejo arrives home when the family finishes the aarti. Tejo brings Jasmin to them. Gurpreet asks the reason for Jasmin’s coming. Tejo tells them that Jasmin wants to stay here with them, she wanted this family and this house along with Fateh. She asks Jasmin to keep Fateh, leaving the family shocked.

Fateh meets Tejo’s family. He learns that Tejo had visited the house and took Jasmin forcibly with her. Rupy and Satti ask him the matter, why Tejo was so tempered. Abhiraj asks Fateh about his lie. He asks Fateh to share the truth before it gets too late. Fateh wants to go home and rescue Jasmin. Rupy realizes that Fateh knows the truth, but isn’t telling them anything. He demands an answer from him. Tejo asks Khushbeer to question Fateh and Jasmin about their relationship. Tejo tells Amrik that his doubt was right, she was a big fool to trust Fateh and Jasmin. She tells that Jasmin is right for their family.

Khushbeer asks them to tell him the truth at once. Tejo asks Jasmin to tell the truth. Fateh apologizes to Rupy. He tells Rupy that he couldn’t keep the relationship with Tejo with loyalty and faith. He feels he made a big mistake to marry Tejo. He confesses that he still loves Jasmin. The family is stunned by his confession. Tejo asks Jasmin to tell them about her relation with Fateh. Gurpreet tells that Jasmin broke the marriage and also their relations. Fateh admits that he has done wrong with Tejo and her family. He makes a sincere apology.

Reviewed Rating for Udaariyaan 8th September 2021 Written Update Tejo’s bold move: 3/5 This rating is solely based on the opinion of the writer. You may post your own take on the show in the comment section below.