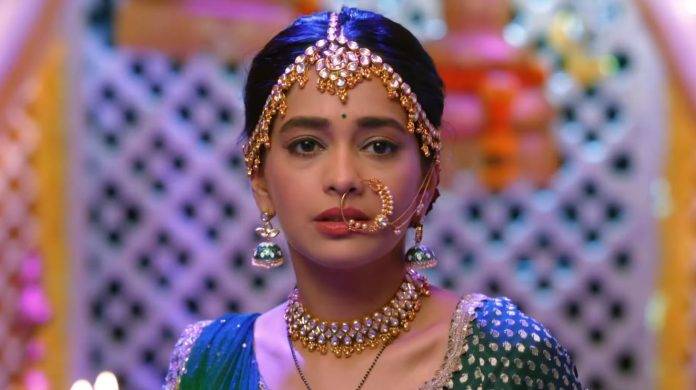 Kumkum Bhagya 7th September 2021 Written Update Prachi accused Abhi tosses a coin on his friend’s word. They lose the coin and laugh at Abhi. Abhi enjoys his time with them. He messes the whole place. Pragya goes to check on him. She finds Abhi drunk. She doesn’t want him to drink and spoil his health. On the other hand, Prachi tells the family that she didn’t know when she got hurt, she was so lost in the dance. Pallavi tells that Prachi danced really well. She asks the guests to come for aarti.

The lady asks Pallavi if she won’t give her bangles to her bahu who danced well. She is excited to know who is the winner. Pallavi tells that she will give the bangles to the one who won her heart. Vikram can sense Pallavi’s anger. Pallavi rebukes Prachi for insulting her in front of the guests. She tells that Prachi wants to show everyone that her Saas is so torturing, and she is so obedient that she danced even after getting hurt. Pallavi asks Prachi why did she do this drama to humiliate her.

Pallavi tells them that she was just telling Prachi that she should have stopped dancing once she got hurt, she didn’t need to hurt herself to impress others. She declares the winner of the dance competition, Rhea. Rhea gets glad to get the bangles. Prachi turns sad that she had made Pallavi upset again. The guests praise Rhea and Prachi for being such good dancers. Prachi goes to take some rest. Rhea wears the bangles. She shares her happiness with Ranbir, who is worried for Prachi. Ranbir finds Prachi upset. He cares for her injured foot.

Siddharth likes their love bonding. He wishes Rhea and he also share such a strong bond. Rhea runs to see Ranbir and Prachi. She grows jealoys. Ranbir hugs Prachi and consoles her. He tells her that she danced really well. Siddharth asks Rhea why did she come to disturb them. Rhea tells that Pallavi asked Prachi to get the sweets. Prachi rushes to get sweets. Siddharth suspects Rhea’s intentions. Prachi impresses everybody with the amazing sweets. Rhea knew it that Prachi will get the sweets first, which contains garlic.

She asks Prachi to hand over the sweets to Pallavi. Pallavi checks the sweets. She gets the garlic smell from it. Prachi tells that she didn’t even touch the garlic. Rhea asks Pallavi to taste it and check if it has garlic. Prachi tells Pallavi that she didn’t use onion and garlic in the food. Pallavi thinks she is just assuming so. Rhea wants Pallavi to know Prachi’s mistake and reprimand Prachi. She makes Pallavi drop the sweets. She makes an apology to Rhea. Pallavi asks what will they keep in aarti at this time. Rhea makes them see the garlic.

Prachi gets framed once again. Dida and Pallavi want an answer from Prachi. Rhea tells that she will make the sweets. She asks Teji to help her make the sweets. Pallavi asks Dida not to defend Prachi again. She tells that Rhea saved them from committing a sin. Rhea goes to damage the Kanha swing while Prachi is away. She just wants to get the locker keys. Will Prachi get the scolding once again? Keep reading.

Reviewed Rating for Kumkum Bhagya 7th September 2021 Written Update Prachi accused: 1/5 This rating is solely based on the opinion of the writer. You may post your own take on the show in the comment section below.