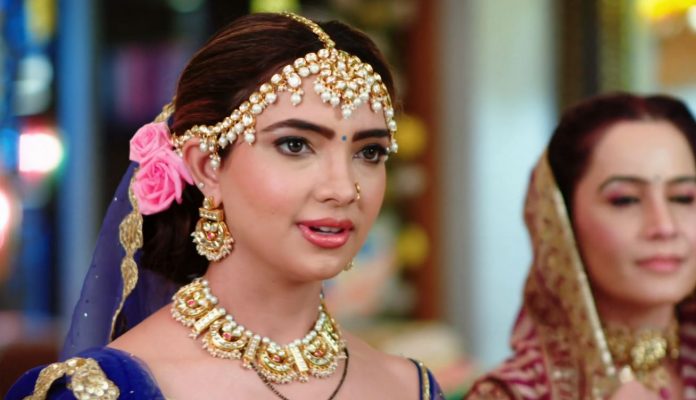 Kumkum Bhagya 8th September 2021 Written Update Dirty ploy Rhea impresses the family by lying that she had made the bhog prasad, while she makes Tejo prepare it. Dida asks Pallavi to perform the aarti. She gives the chance to Prachi to start the aarti first. Rhea awaits the swing’s breakdown so that Prachi gets reprimanded again. Prachi sings a bhajan with all the devotion, while doing the aarti. Pallavi and others continue the bhajan and the aarti. Prachi is in shock seeing the Kanha idol falling down.

She rushes to the rescue and holds the idol in her arms. Rhea was expecting the idol to fall down, and a huge scene created after that. Prachi doesn’t let anything wrong happen. Vikram vents anger on Pallavi. Pallavi gets against Prachi once again, since the responsibility was of Prachi. Meanwhile, Gaurav goes to the chawl to meet Abhi. He meets Abhi’s Tai ji. He asks for Aaliya. Tanu asks Gaurav to come with him. Gaurav asks them if they don’t know him. Tanu tells that Abhi has become Pragya’s husband now. He is confused. He tells that Tanu was Abhi’s wife. He asks them what’s happening. Tanu tells that Pragya is Abhi’s wife. He asks Tanu who is she.

Aaliya tells that Pragya and Abhi’s divorce didn’t happen yet, they are still husband and wife, they want to give another chance to their life. Gaurav tells her that his statement will be proved fake in the court, since Pragya has her husband with her. He angrily leaves. Aaliya asks Tanu to give her money for saving her. She tells that Tanu has double crossed Gaurav and went to Pragya to sell Abhi. Tanu tells that she had taken advantage of the situation, she got money for herself, she will make sure that Abhi troubles Pragya.

Aaliya explains that Tanu has done a big mistake. Vikram tells Pallavi that she has ashamed Dida and him as well, she is the reason that the puja spoilt. Dida calms him down. Dida tells that its not Prachi or Pallavi’s mistake. Vikram tells that its the limit, that the household fights are affecting the family. He feels Pallavi did wrong to give such a big responsibility to clumsy Prachi. He asks Prachi why did she take the responsibility when she wasn’t willing to work. He can’t forgive Prachi for this.

He asks Pallavi to reconsider before making any big decisions. He feels Pallavi has disappointed him. Prachi feels more hurt than Pallavi. Vikram further reprimands Prachi in front of the guests. Prachi gets too upset. Vikram goes away. Pallavi also rebukes Prachi. Dida tells that Prachi held the idol, nothing went wrong. Prachi tries to clarify, but Pallavi doesn’t hear a word. Pallavi tells that she got insulted because of Prachi. She asks Ranbir not to defend his wife. She asks Ranbir if she deserved Vikram’s anger.

She feels Prachi is good for nothing. Rhea wants Pallavi to scold Prachi more. Pallavi frees Prachi from all the responsibilities. She takes the house keys back from Prachi. She lectures Prachi. She adds that Prachi doesn’t have any sense of responsibility and focus, she has always failed to keep up the expectations. She tells them that she will give the house responsibility to Rhea, who never disappointed her. Rhea tries to act great and defends Prachi. Pallavi asks Rhea to take care of the guests. She asks Prachi not to insult her further. She orders Prachi to go to her room and not show her face. Prachi feels too depressed.

Prachi cries and goes to her room. Siddharth asks Rhea if she is feeling bad for Prachi. Rhea tells that Prachi is a strong girl, she will handle herself. She wants to attend the guests first. Siddharth gets puzzled. Teji and Rhea handle the arrangements. Ranbir pacifies Prachi. He asks her to think of Abhi and Pragya, and focus on them than the Kohli family. Prachi feels guilty. He asks her to come for a long drive. He suggests that they can go and meet Pragya. Pragya gets disappointed seeing Abhi drunk. She goes away, while Abhi thinks she got angry on him. Prachi decides to meet Pragya. Will Abhi learn that Pragya got him home on Prachi’s word to cure him? Keep reading.

Reviewed Rating for Kumkum Bhagya 8th September 2021 Written Update Dirty ploy: 5/5 This rating is solely based on the opinion of the writer. You may post your own take on the show in the comment section below.