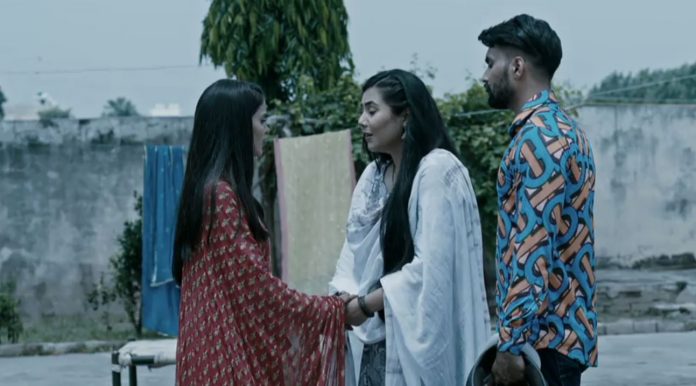 Udaariyaan 9th September 2021 Written Update Insane twist Tejo asks Jasmin to confess the truth. Fateh’s family is shocked to learn about Fateh and Jasmin’s relationship. Tejo tells them that Fateh and Jasmin’s relation never ended, they had lied to them and secretly kept meeting. She reveals how she had caught them red-handed attending a party as a married couple. She also adds that Fateh and Jasmin decided to marry and planned to go away to Canada, they have also applied a visa. Rupy slaps Fateh for cheating Tejo.

Abhiraj also rebukes him for ruining Tejo’s life. Tejo tells that she wasn’t there in Fateh’s life, she was just a lie, Jasmin is the truth. She regrets that her sister is her husband’s love. Gurpreet asks Tejo to just deny the truth once. Tejo tells that its the truth that Fateh and Jasmin cheated her. Fateh tells Tejo’s family that he is really sorry, he needs to go and stop Tejo from taking a wrong step. He rushes to his house.

Tejo tells Khushbeer that she is sure of her suspicion, since she has seen the truth herself. Amrik asks Jasmin to say the truth. Tejo tells that Jasmin is a big liar. Tejo asks Jasmin to stay with Fateh as she wants. She gives away Fateh to Jasmin.

Fateh reaches home to stop Tejo. He asks Tejo to tell the family how she has back-stabbed him by her affair with Buzo. Fateh raises a question on her character. Buzo is also there and receives a shock by Fateh’s dirty mindset. He counts the lies Tejo told him. He doesn’t let Buzo say anything. Tejo tells Fateh that its a big lie, she is not a liar. Fateh confronts her about her college friend Urvashi.

Tejo gets speechless because she can’t reveal about Simran, that would make Khushbeer against her as well. She doesn’t want to hurt Khushbeer and Gurpreet’s sentiments by telling the truth, but gets compelled to admit about Simran and Buzo’s relationship. Tejo attempts to prove herself a clean character person. Khushbeer takes a stand for Tejo. He angrily slaps his son for stooping so low that he is tarnishing her character to hide his own affair. Fateh commits a big sin by doubting on Tejo’s character. He doesn’t regret telling his family about Buzo and Tejo’s affair, which is just his misunderstanding. Fateh and Jasmin turn the family against Tejo. Will Tejo reveal about Simran and prove Fateh wrong? Keep reading.

Buzo denies to have an affair with Fateh. He feels ashamed of Fateh’s thinking. Khushbeer slaps Fateh and rebukes him for staining Tejo’s character just to hide his own mistake. He can’t believe that Fateh is cheating his nice wife for a evil girl like Jasmin. He loses his cool. Gurpreet asks Fateh to deny his affair with Jasmin. Fateh tells her that Tejo has told the truth about Jasmin and him, he really loves Jasmin and she also loves him. He takes a stand for Jasmin.

He declares that he wants to stay with Jasmin, he isn’t able to forget her ever. Khushbeer asks Fateh to stop his nonsense at once. Tejo stops Khushbeer and protects Fateh from his dad’s wrath. Fateh realizes Tejo’s greatness, but thinks she is acting. Tejo tells them that Fateh has decided it, he will get what he deserves, he deserves Jasmin, who is his love.

She tells that Jasmin is the good fate and also bad fate for the family. She is thankful that Ganpati brought light for her, he opened her eyes and gave her strength to fight with the cheat of her husband. She fights for her self esteem. Tejo gives up on her sindoor by washing it off with water. She takes the sindoor to welcome Jasmin in the house. She asks Fateh and Jasmin to unite forever, because they wanted this. She proves her big heart by giving away her husband to Jasmin. She asks the family to accept Jasmin as Fateh’s love. She feels sorry that she has to depart from the family.

She apologizes to them for her mistakes. She tells that she has to protect her esteem first, esteem is more important than marriage and love. She sacrifices her relationship with Fateh. Tejo returns to her parents’ house, and shares her pain with the family. The family regrets to believe Jasmin. They feel the same pain and sorrow as Tejo. Rupy tells that he is really unfortunate that his daughter has ruined another daughter’s house. Khushbeer asks Gurpreet to sing her son’s praise now, when he had ruined his family respect and also his wife’s esteem. He vents his anger on Fateh.

Khushbeer feels Fateh has broken down his heart badly. He tells that Jasmin rejected Fateh in the mandap and insulted the family, but Tejo kept the marriage responsibility with all the faith. He reminds that Tejo stood by him when he was crying for Jasmin, while Fateh cheated Tejo. He feels ashamed to call Fateh his son. He tells Fateh that he hates him from now. He declares that he won’t accept Fateh and Jasmin in the family. He ousts thankless Fateh from the house.

Nimmo tells that its Jasmin’s mistake equally. She rebukes Jasmin for ruining her sister’s life. Khushbeer doesn’t hear a word from Fateh. He asks him to go away with his love. He tells that Ganpati came home to show Fateh’s true face. Jasmin apologizes to the family. Khushbeer tells them that the house and family belongs to just Tejo, not Jasmin. He tells that only Tejo will be his bahu.

Reviewed Rating for Udaariyaan 9th September 2021 Written Update Insane twist: 3/5 This rating is solely based on the opinion of the writer. You may post your own take on the show in the comment section below.