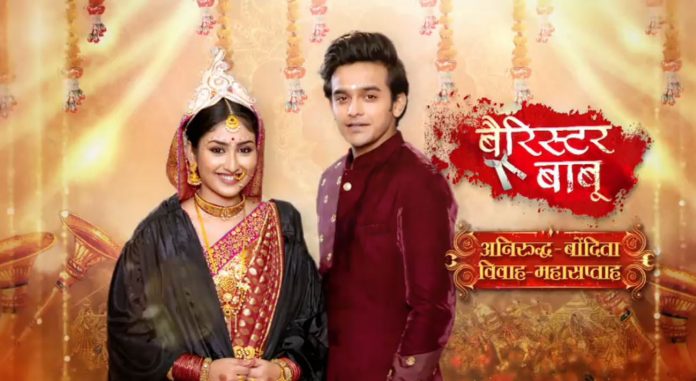 Barrister Babu Upcoming New entry Bondita Anirudh wedding Thakumaa tells the tradition where she will be washing the groom’s feet. Bondita is sure that Anirudh will oppose the tradition. She tells that Anirudh will not do anything that goes against his ethics and principles. Anirudh refuses for the rituals. Thakumaa tells that she wants to pay respect to the groom. He tells that their place is superior being the girl’s family, since they are going to give the girl to him and complete his family. He respects the girl’s family who is at the giver’s side.

He tells that groom is at the receiving end, and should give the respect to them. Thakumaa still wants to pay the respect to him. Anirudh changes the traditions. He tells that he won’t complete the rituals and apologizes to Thakumaa. The other grooms also follow Anirudh. Anirudh tells that he will pay respect to the one who deserve respect. He washes Thakumaa and Sumati’s feet to keep the tradition and respects them. He seeks their blessings. Chandrachur can’t tolerate the happy beginnings between Krishnanagar and Tulsipur.

He creates chaos by slapping a guy of low caste. He asks them to oust the low caste couple from the function. Anirudh calls Chandrachur’s thinking low and asks him to throw out the dirty ego, which is making him fall in their sights. He wants to end the bad custom of class discrimination. He asks Chandrachur to apologize to the guy. Chandrachur refuses to him. He sticks to his opinion. Anirudh tells that Chandrachur isn’t any God to write someone’s fate. He lectures Chandrachur.

Chandrachur doesn’t tolerate. Anirudh gets provoked by him. He threatens to kill Chandrachur. Thakumaa makes an apology from Chandrachur’s side. Chandrachur stops her. He apologizes to the guy. Anirudh wins the argument. Bondita feels proud of Anirudh. They have a dance performance to double the celebrations. Sampoorna apologizes to Bondita. He gifts her the jewellery from Trilochan’s side. Bondita knows that Trilochan has sent the jewellery for her. Sampoorna asks Trilochan to meet Bondita, who already knows his gesture.

Trilochan feels ashamed to face Bondita. Bondita apologizes to him for making him upset by her mistakes. He tells that he isn’t able to meet her eyes. He admits his mistakes and repents. He doesn’t want to face her. Bondita acts hurt to get him to care. Trilochan cares for her. She tells that he is like his father and she should face her by that relation. Chandrachur can’t let Bondita and Anirudh marry. He wants to stop their marriage. He gets an idea of kidnapping Bondita. He decides to summon Musa to get his help. Who is the new entry? What twists will come in Bondita and Anirudh’s marriage? Keep reading.

Reviewed Rating for Barrister Babu Upcoming New entry Bondita Anirudh wedding: 4/5 This rating is solely based on the opinion of the writer. You may post your own take on the show in the comment section below.