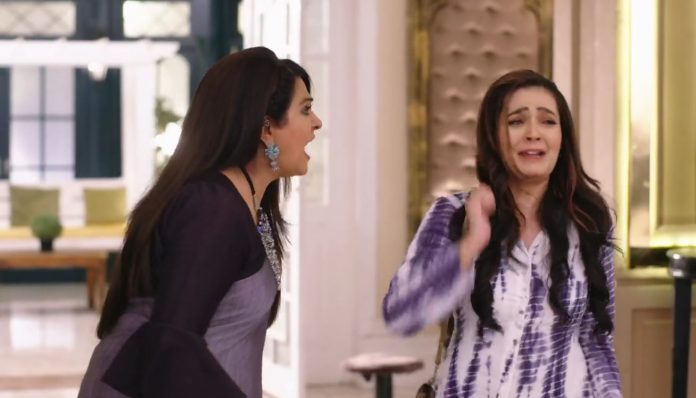 Kundali Bhagya 9th September 2021 Written Update Pihu’s truth Sonakshi’s entry gets quite unexpected and puzzling when she recently bid an adieu to the Luthra family stating she is going to London forever and will never look back. Sonakshi didn’t leave for leaving. She comes back once again and this time she carries a storm along, in the form of the biggest claim on Pihu. She tells the Luthras that she won’t go until she introduces her daughter to them. The Luthras don’t welcome Sonakshi home. This time, they get stern to make her leave. Sonakshi refuses to move.

She wants Sonakshi to have some shame and get lost. Sonakshi tells them that she isn’t ashamed, she has a daughter, she will make them meet her daughter. Kareena yells at her to stop her from revealing anything.

Sonakshi yells at a louder tone and shouts out Pihu’s name as her daughter. This huge revelation shakes down the Luthras. They didn’t imagine that the girl they got via Kareena’s friend working in a NGO, is actually Sonakshi’s daughter Pihu. Kareena seems to have known the truth before and tries to stop Sonakshi from making the revelation, but in vain. Karan and Preeta receive a huge shock thinking they will be losing Pihu. Did Kareena plan to get Karan’s daughter home through adoption? Is Sonakshi involved in the whole mess? Who is targeting Preeta this time? Keep reading.

Sonakshi gets emotional and hugs Pihu, right in front of the entire Luthra house, shocking Karan and Preeta the most. Preeta sends Pihu to the playroom with Kritika. She doesn’t want the girl to witness any drama. She asks Sonakshi why did she come back and what is she doing with Pihu. Shrishti questions if Sonakshi didn’t go to London. Rakhi asks Sonakshi what is she planning.

Preeta tells Sonakshi that everyone thought she is going to start a new life. Sonakshi cries to reveal that she was going to leave the past and go away to London, but she has something left in the Luthra house. Kareena calls Sonakshi a shameless girl to fool them so badly. She tells that Sonakshi lied to them and played an emotional drama, they got fooled and believed her, they wanted to attend her marriage, but she had targeted Karan and Preeta’s marriage. She didn’t think Sonakshi will cheat them by hiding the past.

She doesn’t spare Sonakshi. She asks Sonakshi to stop clarifying and leave. She tells that Sonakshi should have privately told them the truth, but she chose to defame the Luthras in front of the society, she chose to reveal her past with Karan during her marriage. Rakhi blames Sonakshi for snatching their happiness. Shrishti asks Sonakshi not to harm Preeta’s life and happiness by faking a sisterly relation. Mahesh advises Sonakshi to leave, but she clears to them that she didn’t come to depart.

She tells Karan that she had almost left from his life, but she knew that something is still between them. She wants to tell him the truth. Karan doesn’t want to know anything and converse with her. He asks her to leave before he loses his cool. Sonakshi asks Karan if its just her mistake. Karan tells him that he isn’t at fault, she is wrong that she insulted him and ruined their friendship. He requests her to leave.

Kareena tells Sonakshi that they decided not to keep any terms with Karan’s past, Preeta is Karan’s present and future. She doesn’t think Sonakshi can come between Karan and Preeta. She calls Sonakshi a closed chapter. Sonakshi tells that fate decides everything for people. Sonakshi tells that its her fate that got her back to them. Preeta tells that she had wished her good luck before, but now she doesn’t understand her intentions. Sonakshi tells Preeta that her baby isn’t dead. Kareena shouts on her to make her quiet in front of the family.

The family is shocked to know that Sonakshi had given birth to Karan’s daughter. Kareena tells Sonakshi that nobody wants to listen to her. Shrishti asks Sonakshi why is she lying. Sonakshi tells that her dad had lied to her and make her move on in life. Sherlyn didn’t expect this twist. Sarla tells Sonakshi that they can’t trust her. Sonakshi knows that she has hurt Preeta, but it wasn’t deliberate. Sarla accuses her for hurting Preeta and Karan’s relationship. Sonakshi tells that she just came to tell the truth about their daughter, her daughter is a miracle in herself.

Kareena asks her to get out. Bani asks Kareena to let Sonakshi complete, its about Karan’s child. Kareena asks Sarla and Rakhi to protect Preeta from Sonakshi. Sarla tells that she is confused about Sonakshi, she doesn’t know her well. Kareena reacts really weird and goes against Bani to throw out Sonakshi. Rakhi and Bani want to know Sonakshi’s truth once. Kareena tells that Sonakshi is lying. She understands Sonakshi’s planning. She thinks Sonakshi wants to take Preeta’s place in the family. Sonakshi tells the family that Pihu is their daughter, its the truth. The family is left in shocked. Keep reading.

Reviewed Rating for Kundali Bhagya 9th September 2021 Written Update Pihu’s truth: 2/5 This rating is solely based on the opinion of the writer. You may post your own take on the show in the comment section below.