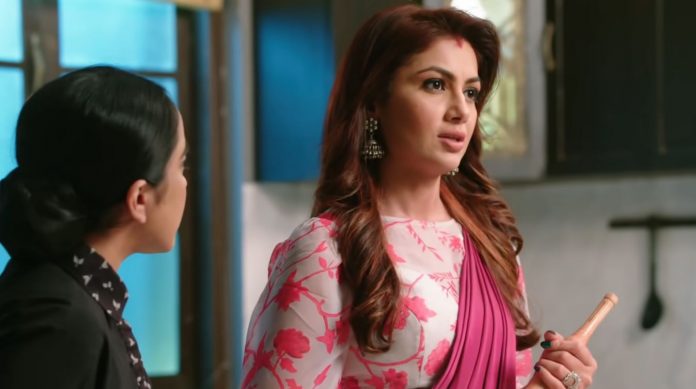 Kumkum Bhagya 10th September 2021 Written Update Fuggi returns Pragya promises Prachi that she will look after Abhi’s health and stop him from drinking. She fails to stop Abhi from going to his friends and resume the party. Abhi continues to drink, by not paying attention to Pragya’s warnings. He asks her not to dominate him in front of his friends, who aren’t knowing about their real marriage. He tells her that his friends would take it wrong if he tells them that she was his wife some years back. Pragya doesn’t listen to anything. She tries to make his friends leave, but he stops them.

Abhi’s mad party goes on, while he and his friends drink a lot. Pragya gets helpless with the last option, that’s to create chaos to put an end to the boys party. She hinders Abhi’s party by leaving some cockroaches. She hides there until Abhi shouts for her. Abhi and his friends get troubled by the cockroaches. Pragya asks Abhi to just dismiss the party. Abhi asks her if its her plan to disturb him. She tells him that she had emptied the alcohol bottles and filled coloured water in that, he won’t get anything to drink now. He asks her if the cockroach idea also came from her mind.

She admits that she planned it to make him end the party at once. He asks her how dare she does this, and what’s the reason. She tells him that she doesn’t care for expensive alcohol and money, but his life. Pragya gets back into the wife mode. Abhi gets to see the glimpse of his old Fuggi in Pragya. Abhi’s Fuggi is back in form. What will happen next? Will the couple ever clear their misunderstandings or continue their everlasting nok jhok just like that? Keep reading.

She tells that he already had enough. He tells that she is jealous of him, he will do the opposite of whatever she tells. She runs to attend an important phone call from Prachi. Prachi tells Pragya that she didn’t wish to disturb. Pragya tells that Abhi is going to drink more, but she is more stubborn, she will stop him from drinking. Prachi and Ranbir wonder what will Pragya do. Pragya tells the helper Anchal that she will stop Abhi’s madness in his own way. Anchal asks her not to act like typical wife.

Pragya tells that Abhi’s condition is critical, she can do anything to stop his drinking. She thinks to use cockroaches to control her husband. Abhi and his friends wait for the food. They think Pragya is really angry. Anchal drops some cockroaches there by leaving the jar open. Abhi and his friends apologize to her. They get troubled by the cockroaches. Abhi’s friends run away from the house. Abhi gets scared of cockroaches and lizard. He asks Pragya to come with him, else the lizard will trouble them. Anchal informs that the lizard left. He goes to his friends. Pragya thinks her plan worked.

She asks Anchal to throw the alcohol before Abhi comes back. She takes Anchal’s help and empties the bottles. She sets back the bottles by filling water. On the other side, Rhea looks after the guests well. She gets tired and irritated by the duties. She vents anger on a kid, and gets rebuked by the guest. The guest complains to Pallavi and Dida about Rhea. Pallavi doesn’t stop herself and warns Rhea. Rhea makes an apology to the kid. Dida asks Rhea to handle the kid well. Rhea apologizes to Pallavi.

She doesn’t wish to become a maid for them. She feels her plan worked wrong, she is looking after the guests and Prachi is resting in the room. Abhi gets his friends back inside the house, thinking the cockroaches left. Abh takes his friends to the bar again. He wants to drink and show Pragya that he is superior. Abhi finds the taste different like plain water. He confronts Pragya for her silly plans. Stay tuned.

Reviewed Rating for Kumkum Bhagya 10th September 2021 Written Update Fuggi returns: 4/5 This rating is solely based on the opinion of the writer. You may post your own take on the show in the comment section below.