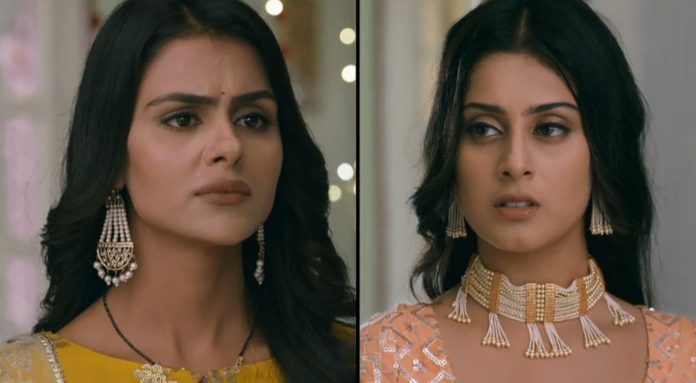 Udaariyaan 17th September 2021 Written Update Jasmin caught Tejo struggles to get ready and pick her stuff because of Jasmin, who didn’t leave her in peace. Tejo shares her pain with the family. They together feel ashamed of Jasmin’s act. Jasmin gets crazy to get revenge on Tejo, as if Tejo is a total stranger for her. She doesn’t respect or value blood relations. Jasmin doesn’t care for Tejo or anyone else. She overhears her parents’ grief over her presence in the Virk house. She wants to get just Fateh.

Jasmin stays in the happy world, thinking Tejo will soon leave the house. She waits for the festive to end, so that Rupy and Satti take Tejo home. Tejo stays strong as ever. She doesn’t let Jasmin hurt her emotions like before. Tejo decides to find out what and how did Jasmin spoil her room. She gets to see Jasmin’s evil face. She understands Jasmin’s evil thinking and the hidden meaning behind her words. She leaves Jasmin with a warning.

Jasmin doesn’t think Tejo, Fateh or anyone can guess her plan. She stays confident. Fateh learns about the problem faced by Tejo. He doesn’t know that Jasmin is behind the mess. Tejo and Jasmin get into an argument. Tejo wants to have peace in the house. She wonders if Jasmin is planning the evil ploy to trouble her. Tejo packs her bags to leave the house.

Jasmin challenges her that she will change the room completely, she will change the walls as well as the colour. She bids bye to Tejo. She gets relieved seeing Tejo leaving with their parents. Tejo leaves from the house, while Jasmin goes to Tejo’s room to remove the dead rat from the AC duct. Jasmin gets caught red-handed with the dead rat. Fateh will be learning Jasmin’s ploy after the revelation made by Tejo to expose Jasmin’s truth. Jasmin’s evil gets known at the time of the Visarjan. Will Fateh stand for Jasmin, knowing she is wrong? Will he stand by truth, will he support Tejo this time? How will Simran’s truth come out in front of Fateh and the family? Keep reading.

Mahi asks Tejo to get ready, she has kept a new dress for her, its gifted by Biji. Tejo thanks Mahi. Tejo gets decked up and looks stunning. She joins the family for the puja. Biji asks Fateh and Tejo to do the aarti together. Jasmin stops Fateh in front of everyone, making him disrespect Biji. Biji tells that the divorce didn’t happen yet, he is still Tejo’s husband, he will be doing the aarti with his wife. Fateh keeps Biji’s wish. He performs the aarti with Tejo.

The family completes the Visarjan of the Ganpati and finish the final prayers with Tejo’s hands. Tejo stumbles and spills the milk on Jasmin’s saree. Nimmo reminds the family that Fateh insulted Tejo when she had worn the saree, today by fate, Jasmin got insulted. Jasmin reprimands Tejo for insulting her and spoiling her saree. Fateh doesn’t want any drama. He asks Jasmin to go and change. The family wishes that Fateh and Tejo get back together. Tejo understands Jasmin’s plan when she sees the Ganesh’s rat.

She makes a plan to expose Jasmin’s truth. Jasmin asks Tejo to go and not come back. She promises to change everything. Tejo tells that they shall see what changes and what not. She meets the entire family and bids them bye. Jasmin wants to make sure that Tejo never comes back. Tejo leaves with her parents. She stays upset. She recalls Bebe telling them a story in the childhood, how someone troubled a family using a dead rat. Tejo wants to go home and catch Jasmin red-handed. Jasmin goes to Fateh and Tejo’s room to get the dead rat out of the AC duct. Her evil move gets caught by Tejo.

Tejo confronts Jasmin for stooping to this level to make her leave the house. Jasmin pretends that she had come to find the cause of the smell. She acts that she has found the dead rat. She tells that she was just helping Tejo. Tejo doesn’t believe her. She drags Jasmin out to the family. She exposes Jasmin’s plan against her. Tejo tells the family that Jasmin is the real reason for the bad smell, she had left the dead rat in the room. She calls Jasmin worse than the dead rat. Jasmin denies the blames. She tells that she had gone to help Tejo.

Tejo asks her how did she find the rat when the cleaners didn’t find it. She rebukes Jasmin. She tells them that Jasmin had put the dead rat in the AC duct. She demands the truth from Jasmin. Fateh arrives to know the matter. Jasmin seeks his support. She tells him that she had gone to help Tejo, but Tejo is blaming her for hiding the dead rat. She tells that Tejo is accusing her for no reason. Tejo tells that she knows Jasmin well, she did this to make her leave the room. The family believes Tejo.

Jasmin gets badly caught. She asks Fateh to believe her. Khushbeer asks Jasmin to stop lying. Fateh defends Jasmin. He asks Tejo if she has a proof. Tejo tells him that she knows her sister well, Jasmin got this idea from Bebe’s childhood story. Jasmin hides behind Fateh once again when she finds herself in a problem. Tejo asks her to show her true face to the family, instead hiding behind Fateh. Stay tuned.

Reviewed Rating for Udaariyaan 17th September 2021 Written Update Jasmin caught: 5/5 This rating is solely based on the opinion of the writer. You may post your own take on the show in the comment section below.