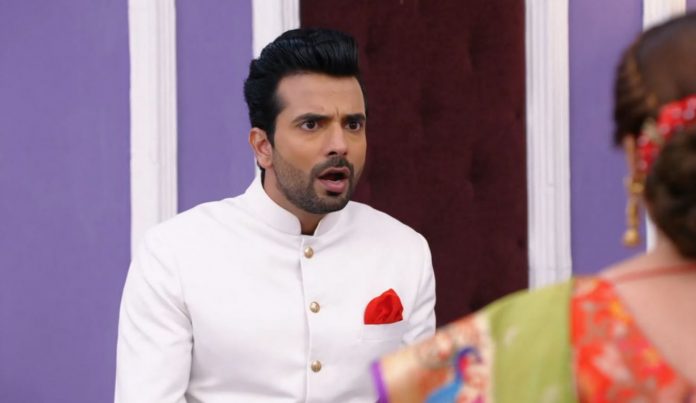 Kundali Bhagya 21st September 2021 Written Update Rishabh’s affair Sherlyn gets angered seeing Prithvi and Kritika’s lovey dovey moments. She finds Rishabh being secretive. She wants to know what is he hiding. She suspects him. She goes to find out whom is he talking to. Prithvi feels he got Sherlyn married to Rishabh just to spy on Luthras. He thinks Rishabh and Sonakshi’s pairing would have been really good. He doesn’t want to fall for Sonakshi, since he is already handling three women in his heart. He finds Sherlyn seeing Rishabh with love. He gets angered on her. He doesn’t want Sherlyn to stare at Rishabh with so much love. He finds Sherlyn and Rishabh gone.

He wonders where did they both disappear. Sherlyn follows Rishabh, who isn’t aware of her spying. Rishabh stays busy on the phone call. He confesses that he loves her and will return to London soon. Sherlyn grows worried hearing his conversation. Prithvi tells Sherlyn that he loves her. He takes Sherlyn with him. Mahesh stops the band artists/goons from roaming in the house. He tells them that they are uninvited, they should leave. Goon asks Mahesh to listen to their music once. Mahesh wants them to leave. The goons make Mahesh emotional by begging for work. Rakhi thinks they are in need of money.

She asks Mahesh to give them money and send them. Mahesh asks the goons to sing a romantic song and take the payment. Goons sing so badly that Mahesh and Rakhi shut their ears. Rakhi asks them to stop singing, take the money and leave. Mahesh asks the goons to have Ganpati Darshan and then come to take the payment from him. He asks them to collect money and leave. Mahesh and Rakhi go away, while the goons make a plan to split and find the boxes.

Prithvi confronts Sherlyn for romancing Rishabh. She tells him that she wasn’t planning any romance, she wanted to know if Rishabh has an affair with someone. She tells him that she had heard Rishabh telling someone that he loves her. Prithvi asks if Rishabh really has an affair with someone. Rakhi and Kareena overhear their conversation. They get shocked to know that Rishabh has an extra-marital affair. Prithvi tells that Sherlyn is a good wife for Rishabh, he should not cheat her. She tells that its her bad fate, that she doesn’t get love in her life. He corrects her mistake. She hits him and goes.

Preeta packs the gifts baskets. She leaves Pihu in the kitchen and goes. Goons reach Pihu and question her about the boxes. Pihu tells them that the elders have taken the boxes outside, some of the boxes are in the guest room. Goons want to get the boxes from the guest room first. Rakhi can’t believe that Rishabh can do wrong with Sherlyn. Kareena worries for Sherlyn’s future. They go to Rishabh and confront him for not coming back home from London for long. He doesn’t answer them. He goes to put his phone on charging. Rakhi goes after him to know his reply. She asks him why did he stay away from the family. Rishabh asks why are they questioning him.

She asks him to confess love to Sherlyn in front of them. Rishabh refuses to say that. Shrishti rushes to tell Sameer about Rishabh’s affair. She tells Sameer that she has a breaking news, Rishabh is having an affair. Karan tells that its impossible. Karan and Sameer laugh on the news. Shrishti tells that she had heard Rakhi confronting Rishabh. Karan tells that he will scold Rishabh and have much fun. Sameer knew it that Rishabh won’t live with Sherlyn.

Shrishti tells that Rishabh should have thought well before marriage, now he should keep his marriage with Sherlyn. She adds that Sherlyn doesn’t deserve Rishabh, but his affair is wrong. Sameer pulls her leg. She tells that she hates Sherlyn, she didn’t expect this from Rishabh. Rishabh tells that he will feel odd to say I love you in front of them. Rakhi and Kareena keep their demand. They tell him that they will hide when Sherlyn comes. Rishabh calls Sherlyn, asking her to come to their room. Rishabh’s affair news spread further. What will happen next? Keep reading.

Reviewed Rating for Kundali Bhagya 21st September 2021 Written Update Rishabh’s affair: 5/5 This rating is solely based on the opinion of the writer. You may post your own take on the show in the comment section below.