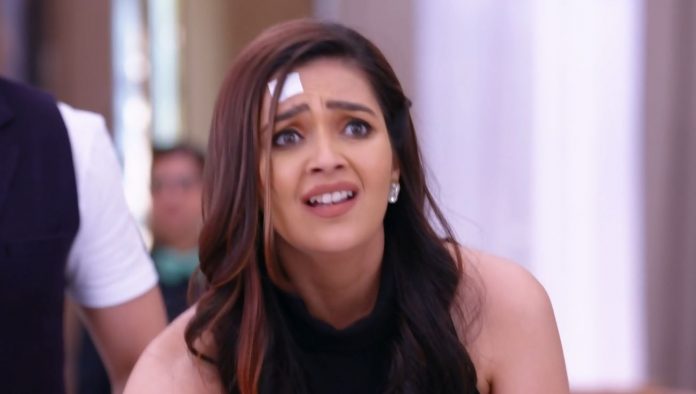 Kundali Bhagya 28 September 2021 Written Update Cheap Sona Sonakshi starts proving to the Luthra family that Preeta isn’t a right person to become Pihu’s mother. She wants to prove to them that Preeta isn’t taking good care of Pihu, because Preeta didn’t give birth to Pihu, she isn’t Pihu’s biological mother, she cares for Pihu but just outwardly, there isn’t any blood relation and emotional bonding between them that exists between a real mother and a child. Sonakshi gets mean to hurt her own daughter not to prove Preeta careless.

She finds Vinita feeding Pihu. Preeta has made the food ready for Pihu. Sonakshi adds some apple cubes in the cereals, while Vinita is away. Pihu is fed by Vinita, and gets choked by the apple cube coming in the liquid food. She coughs a lot. She isn’t able to say anything. Preeta and entire family rushes to attend Pihu. Preeta asks Pihu what happened to her. Sonakshi tells that something got stuck in Pihu’s throat, she isn’t able to talk also.

Preeta takes Pihu and pats on her back. Preeta and Karan relieve Pihu by making her spit the apple chunk. Kareena reprimands Preeta for her careless attitude. She asks Preeta not to become a mother just for her hobby or fun, but take Pihu’s responsibility seriously. She tells that raising children isn’t easy for anyone, especially for those who didn’t give birth to a child.

Preeta answers Kareena that she has accepted Pihu as her daughter, she really cares for Pihu by all her heart. Karan, Rishabh and Rakhi feel sad for Preeta. Preeta gives a befitting reply to Kareena, by calling her words totally wrong. Sonakshi finds Kareena getting against Preeta, and targets to get Kareena on her side. She knows Kareena can influence Karan once Preeta is proved a bad mother. Sonakshi has a motive to win Karan by using Pihu. Will Sonakshi win in her evil plans? Keep reading.

Sarla tells Shrishti that she will find a nice guy for her, because she wants to see Shrishti happy and secure. She asks her to trust her decisions taken for her welfare. Shrishti doesn’t want to marry soon. She thinks to call Preeta and ask her to speak to Sarla. Preeta looks after Pihu. Rakhi asks Preeta about Mahesh’s tablets. Kareena asks Preeta to go and find Mahesh’s tablets.

Preeta asks Vinita to feed Pihu until she comes back. Rishabh greets the family. He tells Pihu that she is a cheater, she slept in his room and then left. Pihu tells that she wasn’t getting sleep and went to Preeta. He tells that she could have told him. Rishabh asks Karan about his practice. Karan is happy that he can focus on his practice, instead worrying for the business, since Rishabh came back home. Sonakshi tries to ruin the happiness and peace by her evil plan.

Kareena taunts Preeta, but Karan stops the former. Sherlyn tells that its Vinita’s mistake, they should fire her from the job. Kareena fires Vinita from the job. Vinita clarifies that she doesn’t know anything. Sherlyn tells that they all can take care of Pihu without the Nanny’s help. Sonakshi wonders what does Sherlyn want from her that she is supporting her. Preeta tells that she is enough for her daughter, Pihu is her responsibility, she isn’t any toy to have her for a hobby. She remarks that Kareena has said a wrong thing and hurt her sentiments. She apologizes to Kareena after showing her mistake on her face.

Rishabh tells Kareena that she should have not spoken to Preeta in this manner. Bani feels Preeta has done wrong to insult Kareena. Sherlyn checks Ananya’s message on Sonakshi’s message. She wonders who is Ananya. She doesn’t know that its actually Yashvardhan who is messaging Sonakshi. Rishabh asks Karan not to stress about the arguments in the house. They find Sameer running out of the house urgently. They wonder what is the urgency. Sherlyn wants to follow Sonakshi and know the truth. Sameer tells that he is getting late.

Rishabh and Karan ask him to tell them the matter. Sameer tells them that he is in much tension, he couldn’t sleep all night. Rishabh asks the reason. Sameer informs them about Shrishti’s call, Sarla wants to get her married, Sarla is finding an alliance, Shrishti doesn’t want to marry anyone. Karan asks him why didn’t he ask Shrishti if she loves someone. Sameer tells that he asked Shrishti, but they couldn’t talk. Rishabh asks Sameer not to worry, he will see who gets Shrishti married to someone else.

Karan tells Sameer that he will help him, but first inform Preeta about it. Sonakshi wants to find a way to meet Yashvardhan. Sherlyn spies on her to catch her mistake. She understands that Sonakshi saved someone’s number by Ananya’s name. She finds Sonakshi leaving from the house through the washroom window. Sherlyn wants to follow her and know whom is she secretly meeting. Rakhi apologizes to Preeta from Kareena’s side. She knows Preeta really felt bad. Preeta tells that she doesn’t feel bad of Kareena’s words spoken in anger.

Preeta tells that whatever Kareena told her isn’t acceptable. She asks Rakhi if she won’t be hurt if anyone taunts her that she is a bad mother. She knows Rakhi is the world’s best mother. Rakhi understands her. She blesses Preeta and Pihu’s love to always stay the same. Karan finds Preeta crying. He asks her if she is upset or angry. She tells that she is fine. He informs that Sarla is finding a guy for Shrishti. She tells that Shrishti didn’t tell her. He adds that Shrishti didn’t call them, but called Sameer.

He tells that Rishabh, Sameer and he are going to help Shrishti. She tells that Shrishti has to tell the reason for refusing for marriage. She asks if he doesn’t know the reason. He tells that he knows it too, that Shrishti and Sameer love each other. Preeta and Pihu also go with Karan to meet Sarla and Shrishti. Sonakshi reaches the hotel to meet Yashvardhan. Sherlyn clicks her pictures. She wants to follow Sonakshi. Sherlyn reaches Sonakshi and hides from her sight. She wants to see who is inside the room. She runs to see, but misses out. She doesn’t want to leave without getting a proof. What will Sherlyn do next? Keep reading.

Reviewed Rating for Kundali Bhagya 28 September 2021 Written Update Cheap Sona: 2/5 This rating is solely based on the opinion of the writer. You may post your own take on the show in the comment section below.