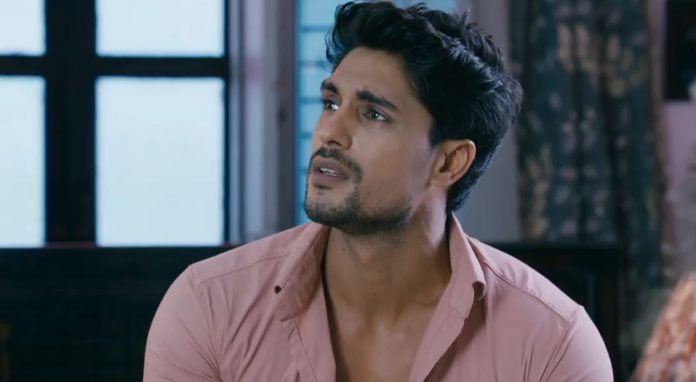 Udaariyaan 28th September 2021 Written Update Fateh Tejo arrest Jasmin doesn’t spare Fateh when he requests her to adjust in the low-class lodge for a week, until he arranges some money. Gurpreet can’t live without Fateh. She asks Tejo to bring back Fateh, just she can bring him home. She has already lost Simran and fears to lose him. Mahi tells that Fateh has done wrong, but he should be at home. She also requests Tejo to get Fateh home. Fateh and Jasmin have left home, and also left the family in tension.

Tejo wants to solve the problems at once by meeting Fateh and requesting him to return home. Ahead, Tejo meets Fateh at the lodge and leaves him surprises. She tells Fateh that she isn’t living in the Virk house because of him, she is just living for the sake of Virk family. Fateh asks her to stay happy with the Virk house, while he is away. Tejo asks him to return home with Jasmin. She has promised Gurpreet that she will bring back Fateh. She asks him not to refuse. While they talk, the police barges inside.

Fateh and Tejo wonder how did the police come inside and why. Inspector rebukes them for booking a room in the shady hotel and spending the night. Fateh tells the Inspector that Tejo is his wife, they are husband and wife, and were just talking. Tejo asks the police to leave her.

The lady Inspector catches her and rudely tells that its a raid to catch the wrongdoers. Fateh asks Inspector to believe him. Inspector tells that husband and wife don’t come to such a place to spend the night. He arrests Tejo and Fateh. Fateh fails to explain anything. Jasmin hides under the table and watches them getting arrested. She didn’t expect this to happen. Jasmin doesn’t come out to help, knowing she will also get arrested. She saves herself. Fateh and Tejo are taken to the police station, where they are put into a cell. They feel the awkwardness to get caught by the police at such an odd place. Will Khushbeer come to their rescue? Keep reading.

Simran is worried for Gurpreet who won’t be able to live without Fateh. Buzo wants Fateh to stay with Jasmin and get his real senses back. Tejo tells that Buzo is upset with Fateh, but they have to think of Gurpreet and get Fateh back. Khushbeer rebukes Gurpreet for sending Tejo to find Fateh, when she knows that Fateh has wronged Tejo so much. Biji supports Gurpreet’s emotions. Khushbeer thinks of Tejo’s emotions. Mahi asks him to forget his principles. She asks him to find Fateh by using his connections.

He tells that Fateh has ruined all his connections, he doesn’t want a son like him. He turns stone-hearted. On the other side, Satti blames Rupy for leaving Tejo in Virk house to cry. Rupy tells that he doesn’t want to force his decision on Tejo, she is really strong and determined. He believes Tejo will never break down. Tejo and Buzo go to find Fateh for Gurpreet and Simran’s sake. They want to know where did Fateh and Jasmin go.

Meanwhile, Jasmin eats the food. Fateh is still disturbed thinking about Gurpreet. He isn’t able to eat. Gurpreet refuses to have food until Fateh comes home. She sheds tears. Khushbeer is just worried for Tejo. Nimmo asks him why is he worried for Tejo when he is losing his son. She tells that he will suffer if he just cares for Tejo. Tejo informs Mahi that she is still finding Fateh, he is nowhere to be found. Khushbeer tells Nimmo that he is standing with Tejo, who is true, Tejo will find Fateh and bring back home. Tejo doesn’t want to lose courage.

Khushbeer knows that Tejo is selfless, she has nothing left in the family, but she is still standing with them. He declares that he will just support Tejo. Tejo and Buzo come to the lodge where Fateh and Jasmin are staying. Tejo thanks Buzo to avoid Fateh and Buzo’s arguments. Buzo asks her to call him if needed. He informs Simran that they found Fateh and Jasmin. Fateh and Jasmin are shocked to see Tejo at the door. Jasmin doesn’t stop insulting Tejo. She accuses Tejo for being responsible for their condition. She commands Tejo to leave at once. Fateh doesn’t tell anything to Tejo.

Tejo tells him that she has come to take him home for Gurpreet’s sake. She clears that she has removed him from her life knowing he is cheating her, she is able to live without him and will always live, but she has come just to get him for Gurpreet’s sake. Jasmin stays outside the room while they talk. Fateh stays silent, while Tejo reminds him that he is leaving his entire family behind for Jasmin. She asks him to think about Gurpreet. He blames her for forcing him to leave the house. Jasmin gets into an argument with the reception guy. The police raids the lodge. The guy asks her to hide somewhere, else she will get arrested.

Jasmin hides under the table. Fateh tells Tejo that Jasmin and he won’t come back home until she is there. Tejo decides to leave the house to take Fateh back. She tells that she is living there just for Khushbeer’s sake. They get caught by the police, who interrupts their talks. The police informs them about the raid. Tejo faces an insult. Fateh tells them that Tejo is his wife, they aren’t doing anything wrong.

The police doesn’t believe them. Fateh gets angered when the Inspector talks dirty about Tejo. Tejo stops Fateh from slapping the Inspector. She tells that they will cooperate. Police doesn’t see their ID and wedding pictures. Police snatches their phones. Fateh and Tejo don’t get a chance to prove their innocence. Fateh protects Tejo from getting mishandled. Tejo falls for him once again seeing the way he protects her, without leaving her for a second. They get separated and dragged to the police van.

Jasmin thinks to protect herself. She watches Fateh and Tejo getting dragged out of the room by the police. Fateh doesn’t think where did Jasmin go. Jasmin gets worried for Fateh. Fateh and Tejo look for Jasmin. Tejo tells that Jasmin is really smart, she would have got hidden by now, she won’t even come to help them. Fateh and Tejo reach the police station. They try to prove their identities and innocence. The police talks cheaply and anger him. Fateh asks the Inspector to give his phone. He doesn’t want to drag Khushbeer’s name in the police case. Tejo asks him not to tell about the family.

Fateh and Tejo are put in the lockup. Fateh tells that he wants to talk to his lawyer. Inspector doesn’t hand over the phone. Tejo stops Fateh from inviting problems. He tells that he isn’t scared of the police, he can handle them. She is afraid that police will beat him up if he misbehaves. Jasmin reaches the police station to help Fateh, but stays confused. She doesn’t want Fateh and Tejo to stay together all the night, even if they are in the lockup. She meets the Inspector and tells that Fateh is her husband. Fateh and Tejo’s problems get higher by Jasmin’s lie. Stay tuned for next.

Reviewed Rating for Udaariyaan 28th September 2021 Written Update Fateh Tejo arrest: 3/5 This rating is solely based on the opinion of the writer. You may post your own take on the show in the comment section below.