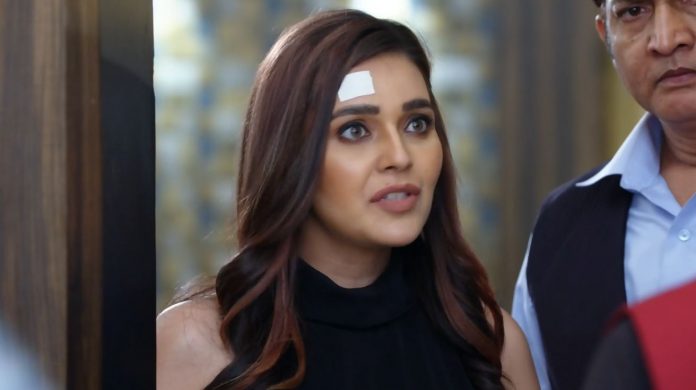 Kundali Bhagya 29th September 2021 Written Update Sona caught Sonakshi secretly meets Yashvardhan at the hotel, while Sherlyn spies to catch her red-handed in her plans. Sherlyn is suspicious that Sonakshi is faking her injury and also her goodness just to fool the Luthras for the sake of Karan’s love. Sherlyn is the only person who could see the truth behind Sonakshi’s pretence. Sonakshi shares her pain with her dad. He tells her about Karan and Preeta’s wedding anniversary, which will be hurting her a lot.

She asks him how does he know about it. He replies that his daughter lives in the Luthra house, so he has to keep all the information about them. Sherlyn sends room service to Yashvardhan’s room to see who opens the door. She is stunned to find Sonakshi with her dad. She realizes that Sonakshi and Yashvardhan played a big drama in front of the Luthras. Sonakshi had broken her relations with her dad to gain sympathy and stay back in the Luthra house. Sherlyn records Sonakshi and Yashvardhan’s conversation with an aim to expose their plans.

Elsewhere, Karan, Rishabh, Sameer, Preeta and Pihu visit Sarla and Shrishti to know about Shrishti’s alliance talks. They want to stop the alliance find and relieve Sarla of the duty by revealing that Shrishti and Sameer love each other.

Karan, Preeta and Rishabh are aware of Shrishti and Sameer’s feelings, but they want them to confess their feelings for each other before it gets too late. Shrishti feels Sameer knows her feelings already and doesn’t confess. Sameer knows her feelings, but is confused thinking if he is overexpecting from their friendship. Karan tries to talk to Sarla about Sameer. Sarla tells him that she is finding an alliance for Shrishti to get the latter married soon. She wishes to get a son-in-law just like Karan, someone who is Karan’s shadow. She is hopeful that she will find such a guy for Shrishti. What will Sonakshi plan to foil Karan and Preeta’s wedding anniversary? Keep reading for a full update.

Sarla asks Shrishti to meet the match maker Sudha. Shrishti gets rude and blunt to call off the alliance talks. Sarla praises her daughter. She shows the profiles of the guys. Shrishti asks her to check. She isn’t interested in any. Sarla tells that Preeta will also give her opinion, then they will take the talks ahead. Shrishti asks Sudha to leave. Sarla asks Sudha to have tea and samosas. They get surprised when Pihu runs inside the house. Shrishti asks if Sameer has come. She gets glad seeing Sameer.

Rishabh, Sameer, Karan and Preeta surprise Sarla. Sarla is really happy to meet them. Sameer is upset to know that Sudha is the matchmaker who got the guys’ profiles to show them. Sarla asks Preeta to check the profiles. Preeta doesn’t want to check, because she knows Shrishti’s feelings for Sameer. Sarla shows the file to them and asks them to give their opinion about the best person suiting Shrishti. Rishabh asks her not to worry, they will find a nice guy for Shrishti, she is their responsibility now. Sudha praises Rishabh and proposes an alliance for him. Karan laughs. Rishabh tells that she got late, he already got married.

Preeta asks Sarla to make tea for them. She sends Sarla away and takes Shrishti for a talk. Sameer sits tensed. He wants to know if Shrishti loves him. Sonakshi asks Yashvardhan why did he call her. He tells that he wanted to know her well-being, he doesn’t trust Luthras. She gets angered on his concern. She tells that she isn’t a little kid that she needs his attention. He tells that he knows it well that she won’t be able to see Preeta and Karan together on their anniversary. He asks them to go back after the anniversary celebrations get over. He adds that he wants to save her from the sorrow.

Shrishti feels he didn’t propose her for a marriage, that’s why she isn’t sure of their love. Sherlyn cleverly tricks Sonakshi to know who is with her in the room. She sends the food to the room. She finds Yashvardhan with Sonakshi. Sherlyn wants Sonakshi to get badly trapped. Yashvardhan tells that he didn’t order the food. Sherlyn knew that Sonakshi came to meet her dad. She wants to click a picture of Sonakshi and Yashvardhan. Karan teases Sameer and asks him to choose a guy for Shrishti.

Preeta takes them to talk to Shrishti. Sameer asks Preeta to help him. Sudha asks Preeta if she liked any guy. Karan tells that he is already there for Preeta. Sudha tells that Sarla said that Preeta will choose a guy for Shrishti. Karan gets jealous when Preeta praises a guy. Rishabh tells that they didn’t come for Karan, but for Sameer. He asks Karan to go and keep Sarla engaged. Karan tells Sameer that he will handle everything. He goes to the kitchen to give company to Sarla, while she makes tea.

She tells that he wants to find a nice guy like Karan for Shrishti. She sings Karan’s praises. She tells that she is worried while finding a good match for Shrishti. Preeta gives excuses to discard the profiles. Karan speaks the opposite. Sameer and Rishabh ask Karan what is he doing. Preeta reminds Karan that they have to stop the alliance talks. She tells Karan that he can’t fix Shrishti’s alliance with any guy. Karan tells that the guy is better than Sameer. Rishabh tells that its their mistake to send Karan to Sarla, Karan has turned responsible and emotional. He asks Karan to sit back.

He asks Sameer to go to Sarla and keep her engaged until they send away Sudha. Sameer goes to help Sarla. She tells that Shrishti and his friendship is really strong, she felt it many times that he likes Shrishti, she is happy that he has come to find a nice guy for Shrishti. He tells that he didn’t come for that. She tells him that she wants a responsible person for Shrishti, she doesn’t want to get Shrishti married to Sameer because of Kareena. She doesn’t want Kareena to vent her anger on Shrishti. She feels her misunderstandings got cleared. He feels terribly speechless.

Sameer also goes and checks the guys’ profiles for Shrishti. Rishabh asks him if he has gone mad. Sameer tells that Kareena is a problem in his relation. Rishabh tells that he will go and talk to Sarla. Shrishti doesn’t want him to get convinced by Sarla like Karan and Sameer. Sherlyn clicks Sonakshi and Yashvardhan’s picture to expose her secret. Keep reading.

Reviewed Rating for Kundali Bhagya 29th September 2021 Written Update Sona caught: 3/5 This rating is solely based on the opinion of the writer. You may post your own take on the show in the comment section below.