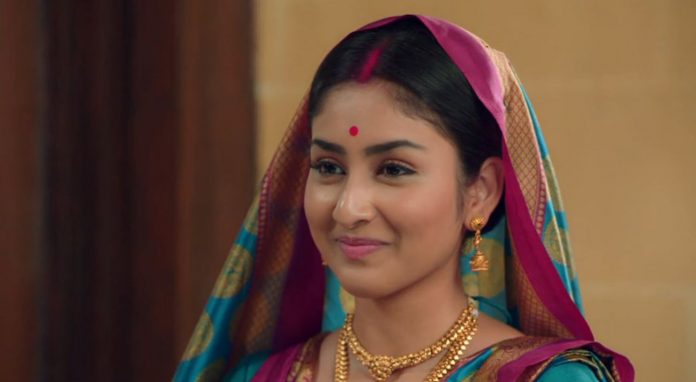 Barrister Babu 30th September 2021 Written Update Intense drama Tapur to tell the truth Thakumaa finds her gold bangles missing and goes in search of the culprit which leads her to Bhari babu. She is about to slap him when Bondita arrives and asks him to leave. Thakumaa is determined to punish Bhari babu. Bondita tries to stop her but Thakumaa says that she will only support the truth and punish the wrongdoer no matter what society thinks. Bondita then says her that Chandrachur was also the culprit why is she supporting his actions and not punishing him.

Bondita says to Thakumaa that sexually assaulting a girl is a bigger crime than a robbery and in Tapur’s case she should not be ashamed but the wrongdoer should. Bondita tries to convince Thakumaa that being silent will encourage assaulters to conduct crime freely and thus Tapur needs to speak the truth. Thakumaa understands that Bondita made up this drama to convince her but she firmly says that nor she or Tapur will speak the truth. Thakumaa says to Bondita that a woman’s character is very delicate once crushed cannot be mended back. Thakumaa declares that she cannot see her daughter’s character being questioned. Bondita tries to convince Thakumaa but she is not ready to listen.

Thakumaa says that Anirudh will be escaped from jail till evening and Bondita should not worry about him. Bondita says that in spite of being free Anirudh will be called a murderer for his whole life and she cannot let it happen. Bondita determines to bring back Anirudh with his lost respect. Bondita tries to explain to Thakumaa that her silence will weaken Tapur even more and she will keep getting scared to go outside as she might see demons in every man.

Bondita tells Thakumaa that if she is worried about Tapur’s marriage it is not easy for her to adjust nicely with her husband. That is why Anirudh should not be escaped but they need to remove fears from the hearts of Tapur and many other girls fallen prey to such crimes. Bondita says that the only way they can achieve this feat is by punishing the men doing wrong with women. She says that they should instill fear in men so that they never ever see women with lustful eyes. Bondita gives an example of Durga and Kali maa and says that they should make all girls as strong as these goddesses. She informs Thakumaa to give girls a Trishul to protect them along with values, culture, and ethics. Thakumaa is unaffected and says that rules and regulations for a woman in society are different and a black spot on her remains even after her death.

In spite of Bondita’s efforts to convince Thakumaa, she is not ready to listen and asks Tapur to come with her and put the bangles on Durga maa. Thakumaa says that she could not save Tapur from Chandrachur but she promises to save her dignity for life. Bondita promises that Tapur’s dignity will not be tarnished even after speaking the truth in court. Tapur agrees to speak the truth. She says that she hates an evil person like Chandrachur and wants to save a god-like Anirudh. Tapur tells Thakumaa that she will die daily if an innocent Anirudh will be hanged because of her.

Bondita promises Thakumaa to fulfill her words till the last breath. Bondita asks forgiveness from Bhari babu but he says that she is doing this for the house and Anirudh and his contributions are nothing. Anirudh is very happy to hear that Bondita has convinced Tapur to speak the truth and appreciates her efforts. Anirudh says that he is proud of his Barrister Babu Bondita. She promises Anirudh that there will be something special in the court tomorrow. Anirudh and Bondita have a romantic moment when the meeting time gets over and they leave together.

Anirudh further says that barrister Subodh Chatterjee’s name will be written in the history of getting defeated at the hands of a female barrister. That woman’s name is Barrister babu Bondita Anirudh Roy Chowdhury. Subodh Chatterjee laughs at Anirudh and says that he will lose his life and Bondita will lose the case. Subodh Chatterjee goes away by challenging them. Anirudh says Bondita that she will win the case to which Bondita replies that they both will together win it. Anirudh holds Bondita’s hand and tells her Vidhvansh Kari (to destroy). Anirudh and Bondita give each other strength and smile through the hard times. What is going on in Bondita’s mind? How will she prove Anirudh innocent without ruining Tapur’s dignity? Keep reading.

Reviewed Rating for Barrister Babu 30th September 2021 Written Update Intense drama: 5/5 This rating is solely based on the opinion of the writer. You may post your own take on the show in the comment section below.