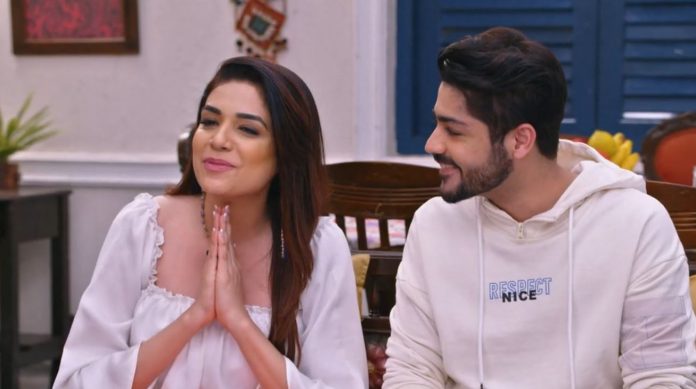 She asks for Shrishti’s picture. Preeta tells her plan to the family. She tells that Sudha will keep bringing the alliances, they have to tell something that Sudha goes away. Karan suggests that they tell Sudha that Shrishti is interested in a girl, not a guy. Shrishti asks him not to change her image completely by such a bad idea. Sudha asks Preeta to tell her if there is anything, she can understand the new generation, if Shrishti has an affair with someone, then she may reject the best alliance, maybe she isn’t able to tell Sarla.

Sarla tells that she is glad that they came home out of concern for Shrishti and gave their opinions. She knows that they also want their best for Shrishti. Shrishti thanks Sameer for coming and bringing everyone to help. He asks her if she did this for her. She tells that she would have fallen in trouble if Sarla chose someone. Karan asks Shrishti to thank him, he got Rishabh and Preeta along to help. Rishabh asks her to thank everyone. Shrishti happily thanks everyone and Sameer also. Sameer gets happy.

Meanwhile, Kareena is hurt by Preeta’s words. Bani also thinks that Preeta had misbehaved with Kareena. Kareena asks how dare Preeta talks to her in that manner. Rakhi meets them and learns about Kareena’s annoyance. Bani feels its Rakhi’s fault as well. She asks Rakhi to explain Preeta to speak to elders well. Rakhi tells that Kareena has said a hurtful thing to Preeta. Bani tells that Preeta should respect elders, she should stay in her limits when she speaks to elders. She adds that Kareena got Pihu home, Preeta can’t just call Pihu her daughter, the entire family has a right on her.

She tells that they will make some other arrangements for Pihu, if Preeta makes a mistake. She adds that they will lecture Preeta if its about Pihu. Rakhi worries by listening to them. Preeta tells Shrishti that she has to decide it soon about Sameer, else they can’t stop Sarla all the time. She comes to the point. Shrishti knows what she means. She thanks Rishabh and Karan. She tells how much she loves them. She thanks Sameer and tells I love you to him as well. Preeta and Karan want them to unite soon. Sarla gives shagun to Pihu on her first homecoming. Shrishti is glad.

Preeta and Luthras leave. Sonakshi returns home from the washroom’s window. She is shocked to see Sherlyn in her room. She lies about her purse. Sherlyn confronts her about going out and meeting her dad at the hotel. She tells that she was suspicious about her already, but was trying to know her game. She knows that Preeta is different, who loves the family a lot, she is protective about them. She tells that Preeta can be anything, but not fake, like Sonakshi. Sonakshi asks her to get lost.

She doesn’t admit anything. She tells that she loves Preeta who is like a sister to her. Sherlyn claps for her innocently good performance. She doesn’t believe Sonakshi’s nonsense act. She shows Sonakshi and Yashvardhan’s picture to shock her. Sonakshi lies that its an old dress. Sherlyn laughs on her silly lies. She adds that she was following her at the hotel, she has gathered enough evidences against her. She tells that Sonakshi can’t deny the evidences. She declares that Sonakshi’s game is over.

Sonakshi asks Sherlyn if she will take the proof to Preeta, if she really cares for Preeta. Sherlyn tells that Karan and Preeta are family. She threatens Sonakshi. She tells that she knows what she would do next. She asks Sonakshi to leave the house. Sonakshi stops Sherlyn to join hands with her, against Preeta. Sherlyn shockingly demands ten crores.

Reviewed Rating for Kundali Bhagya 30th September 2021 Written Update Amazing: 5/5 This rating is solely based on the opinion of the writer. You may post your own take on the show in the comment section below.