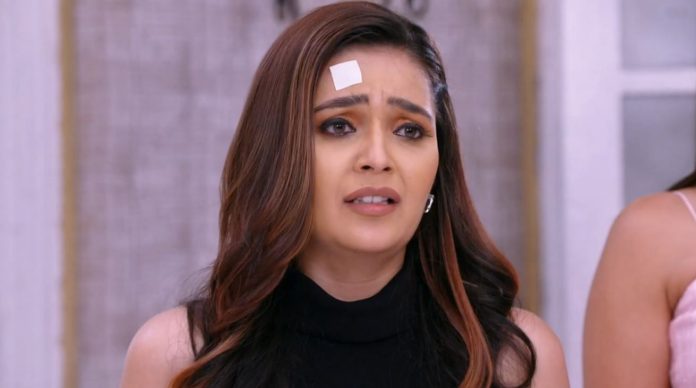 Kundali Bhagya 1st October 2021 Written Update Sona stuns Karan and Preeta leave for home and have a cute arguments on the way. She tells him that he is typical the Karan Luthra, he always acts great and wants everyone to praise him. He tells that he doesn’t trust the people that they can praise him well. She finds him obsessed. He admits that he loves him, he is his favorite and that’s why everyone loves him, he is self-obsessed and is happy. She tells him that many people love him, its fine if he doesn’t love him much. He asks her what’s her problem, she can give him more love if she wants. He feels he is unique, she should take time to know that she is jealous of him.

She tells them that she didn’t tell the family because they were already worried because of Pihu. Sherlyn calls it a lie. She asks Sonakshi why did she go and come from the washroom window, she is a fraud, that’s why she didn’t go from the main door. She tells Sonakshi that she knows everything about her. She asks Sonakshi why didn’t she tell Kritika or her if she wanted to visit her dad. Sonakshi still denies her mistakes. Sherlyn asks her not to lie to her, she has seen her going. Sonakshi doesn’t think anyone will believe her.

Sherlyn tells that it means that Sonakshi is against her. Sonakshi clears that she isn’t Monisha or Mahira. Sherlyn asks the family not to believe Sonakshi. The family believes Sonakshi, who told them the truth. They sympathize with Sonakshi and find her a nice girl. They see Sonakshi’s goodness. Sherlyn calls Prithvi for a meet. She tells him that Sonakshi is really smart, she is acting cunning to fool the Luthras. He asks her why is she so sure, what proof does she have. He tells that she always doubts others. She tells that he will be sorry knowing what Sonakshi did.

She adds that she caught Sonakshi meeting her dad secretly, Sonakshi did a helpless girl’s acting and convinced the family. He tells that its not wrong if she goes to meet her dad. She asks him to see Sonakshi’s truth himself, Sonakshi lied to the family and went to meet her dad. She tells that she caught Sonakshi red-handed, but couldn’t prove anything. Prithvi asks her to keep patience. She asks him some plan to oust Sonakshi. He gives a brilliant plan. She tells that he is the best mean person in the world. He tells that she is also the best mean person. They praise each other’s cunning minds.

Later, Karan and Preeta get into a cute argument once again. He jokes that she lost her mind, it must be fallen somewhere on the ground. She finds him laughing at her. She runs to beat him. He asks her to stop running, she will get hurt. He holds her in arms. Their moment gets witnessed by Prithvi, who is enraged seeing Preeta in Karan’s arms. He regrets that his fate has changed a lot, he was going to marry Preeta, but ended up becoming her brother-in-law. He is glad that at least Sherlyn loves him.

Karan hugs Preeta. He tells her that she looks so beautiful to him. Elsewhere, Rishabh meets Sameer and finds him upset. Sameer thanks him for the help. Rishabh hugs him and assures that he is always with him. Rishabh tells that he missed the family a lot, life looks peaceful with the family. He asks Sameer to take action right away, else he will regret his decision after a few years. He doesn’t want Sameer to make his life a regret. He asks him not to think of the result, and just take the action. He wants Sameer to live free, take a decision for his own happiness, because he owns his life.

He asks Sameer to confess his love to Shrishti, without thinking of the consequences. Sameer takes his advice. He is stressed. Rishabh asks him to forget everything and confess his feelings to Shrishti. Sameer tells that its not easy. Rishabh tells that he has to speak out his real feelings. He adds that even if Sameer didn’t tell his brothers about his feelings, his brothers knew it. He asks Sameer to take a decision before the time passes. He motivates Sameer to fight for his love. Will Sameer confess his love to Shrishti? Keep reading.

Reviewed Rating for Kundali Bhagya 1st October 2021 Written Update Sona stuns: 3/5 This rating is solely based on the opinion of the writer. You may post your own take on the show in the comment section below.