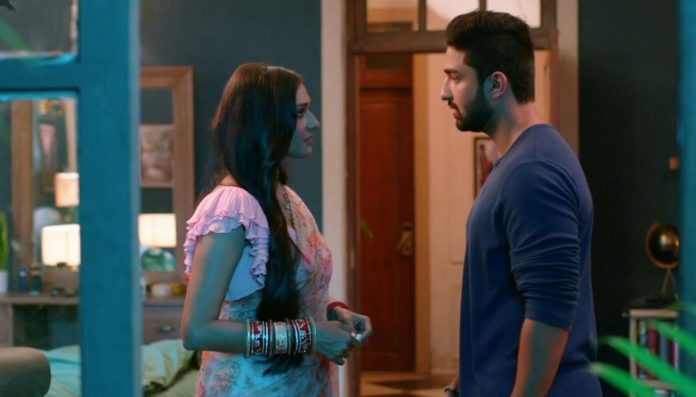 Bhagya Lakshmi 2nd October 2021 Written Update Rishi in guilt Malishka tells Lakshmi that she can do anything for Rishi. Lakshmi replies that just a family member can do so much. She is grateful to her. Malishka tells the family that they will not leave that girl. The family asks Rishi to take some rest. Malishka asks him not to see any news channels that gives him stress. Rano and Neha also watch the news. They realize that Rishi is really mean. Rano worries for Neha’s fate. Neha tells that their fate is good, they got a good chance to slap Lakshmi and break her pride. They call Lakshmi to leave some taunts.

Lakshmi thinks Rano is worried for Rishi. She answers the call. Rano asks Lakshmi did she see Rishi’s state, she should have not married Rishi. She tells that Lakshmi will suffer now. Lakshmi stops Rano and defends Rishi. She tells that Rishi has taken a stand for her and her character, when Rano had tagged her characterless. She knows that Rishi can never molest any girl. She tells that she has seen the truth and decency in Rishi’s eyes, he can never disrespect any girl. She shows her immense faith on Rishi. She feels Rishi is right, he can never be wrong. Rano calls her mad. Lakshmi doesn’t want to hear a word against Rishi.

She tells that she will not respect anyone who doesn’t respect her husband. Rishi overhears Lakshmi’s conversation. He gets emotional. Neha tells that the girl is lying, because Rishi’s character isn’t so weak. Rishi and Lakshmi have a moment. He finds Lakshmi’s strong faith on him and their relation. He tells her that he wanted to tell her, but thought she won’t understand him. She tells that she understands him, because their hearts are connected. She asks him to question his heart, if he thinks she can do wrong with anyone. He also believes that Lakshmi can never do wrong.

Rishi feels guilty. She asks him not to take any sleeping pill, she will make him sleep by a head massage. Rishi tells that she is really nice. Ayush doesn’t think Rishi should go to office. He tells Malishka that Rishi won’t be able to sleep after all the stress. Malishka goes to sleep in Sonia’s room. Lakshmi relaxes Rishi by the hair massage. Rishi falls asleep. Lakshmi finds him sleeping like a kid. She cares for him. She realizes that good people suffer a lot. She prays that Rishi doesn’t get punished. She wants to get punished instead Rishi.

Rishi’s parents are worried seeing the news against Rishi. Neelam gets stressed seeing the same news on the tv. Malishka asks Neelam to relax, they will sort out everything. Neelam feels Rishi is getting mentally tortured. She asks Lakshmi to call Rishi. Lakshmi tells that he is still sleeping. Rishi meets the family. He tells them that he didn’t take the sleeping pills, but he had a good sleep, all thanks to Lakshmi. Ayush asks Rishi to take rest at home, he will handle the office meetings. Rishi goes to get the file for Ayush. Rishi needs to go to the court for the hearing. The family gets worried on knowing this. What will happen during the court hearing? How will Lakshmi defend her husband? Keep reading.

Reviewed Rating for Bhagya Lakshmi 2nd October 2021 Written Update Rishi in guilt: 5/5 This rating is solely based on the opinion of the writer. You may post your own take on the show in the comment section below.