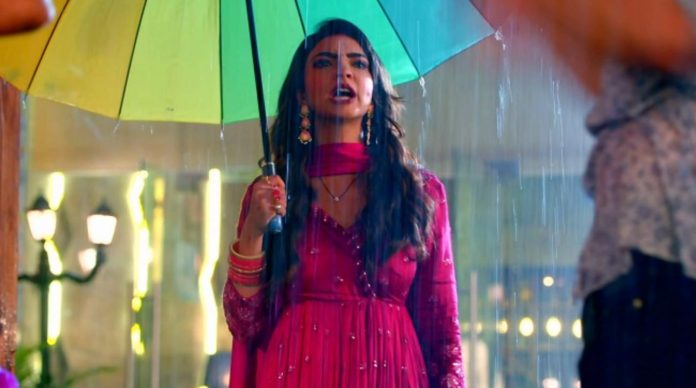 Kumkum Bhagya 4th October 2021 Written Update Rhea yells Rhea finds Ranbir and Prachi dancing in the rain, exchanging romantic stares and hearty conversations. She can’t tolerate them romancing. Rhea yells at Ranbir and asks him to stop dancing with Prachi. Ranbir and Prachi get shocked at her behavior. On the other hand, Tanu asks Pragya why is she working hard for the thing which already belongs to her. She asks why did Pragya pay her for Abhi when he is already of Pragya. Pragya tells her that she is enjoying the game now, she will first given them money and status, and then snatch back everything to take her revenge.

Ranbir and Prachi’s romance goes on in the rain. Rhea throws a vase in anger, but doesn’t succeed in stopping them. Ranbir pulls Prachi close and kisses her. Rhea deliberately goes to them and interrupts their romance, leaving them shocked. Mitali tells Tanu and Aaliya how Abhi was fighting with Pragya. Tanu asks her to shut up. Rhea tells that Pallavi is calling them, he may catch cold. Ranbir tells that Prachi has made him fallen in love, he is feeling love with his wife, he won’t come. Prachi asks Rhea not to tell anything to Pallavi. She asks Ranbir to come with her.

Rhea wants Ranbir to hold her hand. Aaliya tells that Abhi has a concern for Pragya, that’s why he had gone to bring her home, his concern isn’t good for them. Mitali tells that their love story will begin soon. She asks Tanu and Aaliya to apologize to Pragya and stay happy. They send away Mitali. Pragya meets Tanu. She insults Tanu for her heavy plottings. She warns Tanu to stay away from Abhi. Tanu tells that she has given Abhi on rent, he is her husband. Pragya reminds her what Aaliya’s words, Abhi and she/Pragya didn’t get divorced, their marriage is still legal.

She asks Tanu not to chant about her illegal marriage. She warns Tanu against coming to her home with bad intentions. Tanu calls Pragya a big fool to buy Abhi, knowing Abhi is her legal husband. Pragya tells that she will claim her rights now, and teach her a lesson. She tells that she wants everyone at the breakfast table in the morning, she will tell her rules that everyone needs to follow for sure.

Ranbir really catches cold. Prachi asks him why did he spend time in the rains when he knew he will catch cold. He tells that he can get rid of the rains, he is happy that she told I love you to him in front of the family. She asks why doesn’t he like the rain. He tells that he dislikes the road pits that’s formed because of rain, he used to hate rains, but he loves rains since he has seen a beautiful girl dancing in the rains. He tells Prachi that she is that girl. They have a romantic moment. They hug. She tells that she is going to sleep. Rhea grows angered recalling Ranbir and Prachi.

Mitali doesn’t want to cook in Pragya’s house. Rhea wants to pass the time and then leave with Ranbir. She calls Aaliya and shares her happiness. She tells that she is going to Bangalore with Ranbir, she is excited to spend time with him. She adds that Prachi is ready to send Ranbir with him. Aaliya feels Prachi is a big fool. They laugh on Prachi. Rhea doesn’t want anyone to hear her talks. She is shocked to see Prachi packing her bags as well. Dida learns Rhea’s truth and warns her. Will Rhea harm Dadi? Keep reading.

Reviewed Rating for Kumkum Bhagya 4th October 2021 Written Update Rhea yells: 3/5 This rating is solely based on the opinion of the writer. You may post your own take on the show in the comment section below. 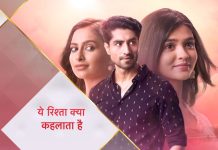