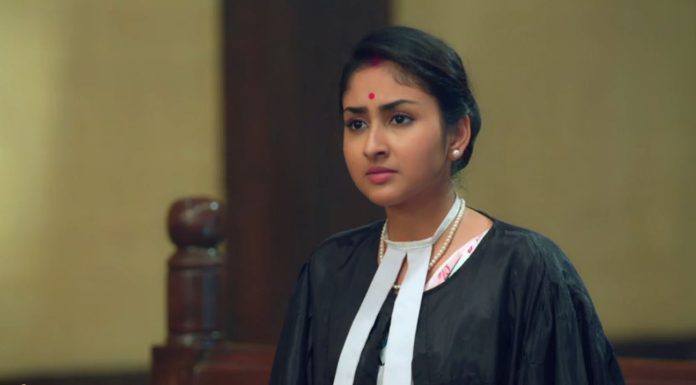 Barrister Babu 5th October 2021 Written Update Truth out Bondita remembers an incident when Chandrachur had spoken about his ring which always safeguards him. Bondita doesn’t find his ring in his belongings and gets a doubt that Chandrachur never parts away from his beloved ring. She decides to keep Chandrachur’s belongings with her and also get records from the police and check properly. Tupur comes there and is scared that Bondita might find the truth. Bondita gets a thought that Chandrachur’s missing ring can prove as a piece of evidence in proving Anirudh innocent.

Bondita, Tapur and other girls dance on the eve of Vijay Dashami. Thakumaa is very happy to see her daughters happy. She blesses them that peace gets restored in their lives. Bondita makes a plan to trap Tapur and find the truth. She seeks Bihari’s help. She goes with Bihari and meets the police staff, who brings some reports for her. Bondita gets certain that the dead body doesn’t belong to Chandrachur. She spies on Tapur to know where she goes every night and why is she acting abnormal, when she is totally fine.

Bondita sees Tapur leaving from the house in the darkness of the night. She follows Tapur. She reaches the same temple where Tapur had gone the other night. She gets hint of Chandrachur’s survival. She confronts Chandrachur and tells him that she will punish him for each and every sin. Chandrachur’s truth is finally out. What will Bondita do to punish the sinner? Comment your views and Keep reading.

Bondita tells Trilochan that they will perform the rituals of Durga Maa. She believes that the situation will change soon. Tapur acts traumatic in front of Thakumaa. She gains everyone’s sympathy. She joins the Suhaagans and dances with them. Bondita finds the list of Chandrachur’s belongings. She checks the belongings again and finds the ring. She gets confused seeing the ring. She finds Binoy losing his control and getting violent because of consuming sweets. She calms down Binoy.

She further finds out that Tupur has given the sweets to him. He tells her that Tupur has served him the sweets when he caught her stealing. Bondita wonders why did Tupur keep the ring, and how did she get the ring from the police. Bondita follows Tupur and realizes her drama. She wants to know why Tupur is fooling everyone. Bondita refuses to perform a puja for Anirudh on the day of hearing. She has much things to find out. Trilochan and Thakumaa make a quick plan to rescue Anirudh.

Tupur wants to perform the puja and keep a fast for Chandrachur. Bondita checks Tupur’s room. Tupur warns Bondita, and makes her doubt more certain. Bondita takes Binoy to the hospital. Anirudh arrives there to meet Binoy. There is an emotional moment between Anirudh and Binoy. Bondita shares her struggles with Anirudh. He motivates her to find the truth.

Few ladies enter the house to celebrate Durga Puja but Trilochan tells them that this year they will not celebrate Durga Puja as circumstances are not better in their house. Bondita comes forward and tells that whatever may be the situation, Durga Puja will be celebrated like every year. Bondita reminds Trilochan that he had taught her that Durga Maa will help in showing new direction always. The ladies and Bondita perform Sindoor Khela.

Tupur says that she wishes to perform the ritual for her husband and Thakumaa gives her permission to do whatever her heart feels to do. Tupur joins the gang and performs Sindoor Khela. Bondita calls the police to get the detailed list of Chandrachur’s belongings but she is shocked to find the ring in the list but not in the belongings. The police ask her to recheck the belongings and Bondita finds the ring.

It creates suspicion in her mind. Bondita gets a doubt that something is fishy and decides to investigate it. Somnath shouts at Sampurna for neglecting Binoy’s health by allowing him to eat sweets. Sampurna tries to convince Somnath that she takes care of Binoy’s food intake and didn’t give him sweets. Bondita volunteers to handle the situation and says that she will give medicine to Binoy. She enters Binoy’s room with the medicine bottle and asks who gave him sweets? Binoy reveals that he caught Tupur lurking around in Bondita’s room and she gave him kheer to eat. Bondita’s doubt is cleared and she realizes that Tupur was the one who kept Chandrachur’s ring in the belongings. She also feels that Tupur has not gone crazy and is only pretending to have gone mad to show others.

Bondita again follows Tupur at night and realizes that she is not mad and is playing a dirty game with her. She matches the footsteps of Tupur with the help of a leaf fallen there and thinks that offering food and talking to a skeleton is all a drama and that Tupur is sane. Thakumaa and Trilochan are secretly discussing something when Bondita comes there and says that they are not thinking about a legal route or else they would have surely consulted her. Thakumaa and Trilochan lie to Bondita that they were speaking about panditji who has asked Bondita to keep a fast for the puja but Bondita refuses and tells that she has to find evidence to prove Anirudh innocent as that is also her duty towards her pati babu.

Bondita decides to do an investigation and goes to Tupur’s room to search for evidence. Tupur enters her room and stops Bondita from touching her stuff. She shouts at her and tells that she is aware that Bondita follows her every night and drags her out of the room. Tupur threatens Bondita that Anirudh will be hanged on Vijaya Dashmi. Bondita realizes that Tupur is doing all these things to distract her and is definitely playing a big game.

Anirudh comes into the hospital to see his father but Bondita is tensed that something has happened to him and asks if he is fine. Anirudh assures her that he is fine and Bari babu had come to inform him that Binoy is not well so he came to see him. Binoy starts crying seeing Anirudh and they both play the game of chor and police. Anirudh is concerned about his father and tells him to look after his health. Binoy answers that he is fine and does not know why he has been brought to the hospital. The doctor enters and Binoy gets restless seeing him and threatens to beat the doctor. Binoy is scared of the injection and Anirudh says that he will stay with him.

Trilochan asks Anirudh to go as Binoy may get scared seeing real police outside. Binoy is not ready to part with Anirudh but convinces him that he will stand outside and watch him from there. Binoy is convinced and asks Anirudh to not go anywhere and watch him from outside. Bondita and Anirudh leave and Trilochan shuts the door. Bondita informs Anirudh that she is very confused as the right direction is blurry. Anirudh motivates Bondita and encourages her to find the evidence as she is not very far from her goal. How will Bondita find the evidence in this tricky situation? Will she be successful in proving Anirudh innocent on this Vijaya Dashami? Keep reading.

Reviewed Rating for Barrister Babu 5th October 2021 Written Update Truth out: 5/5 Finally some relief from tensed plot This rating is solely based on the opinion of the writer. You may post your own take on the show in the comment section below.